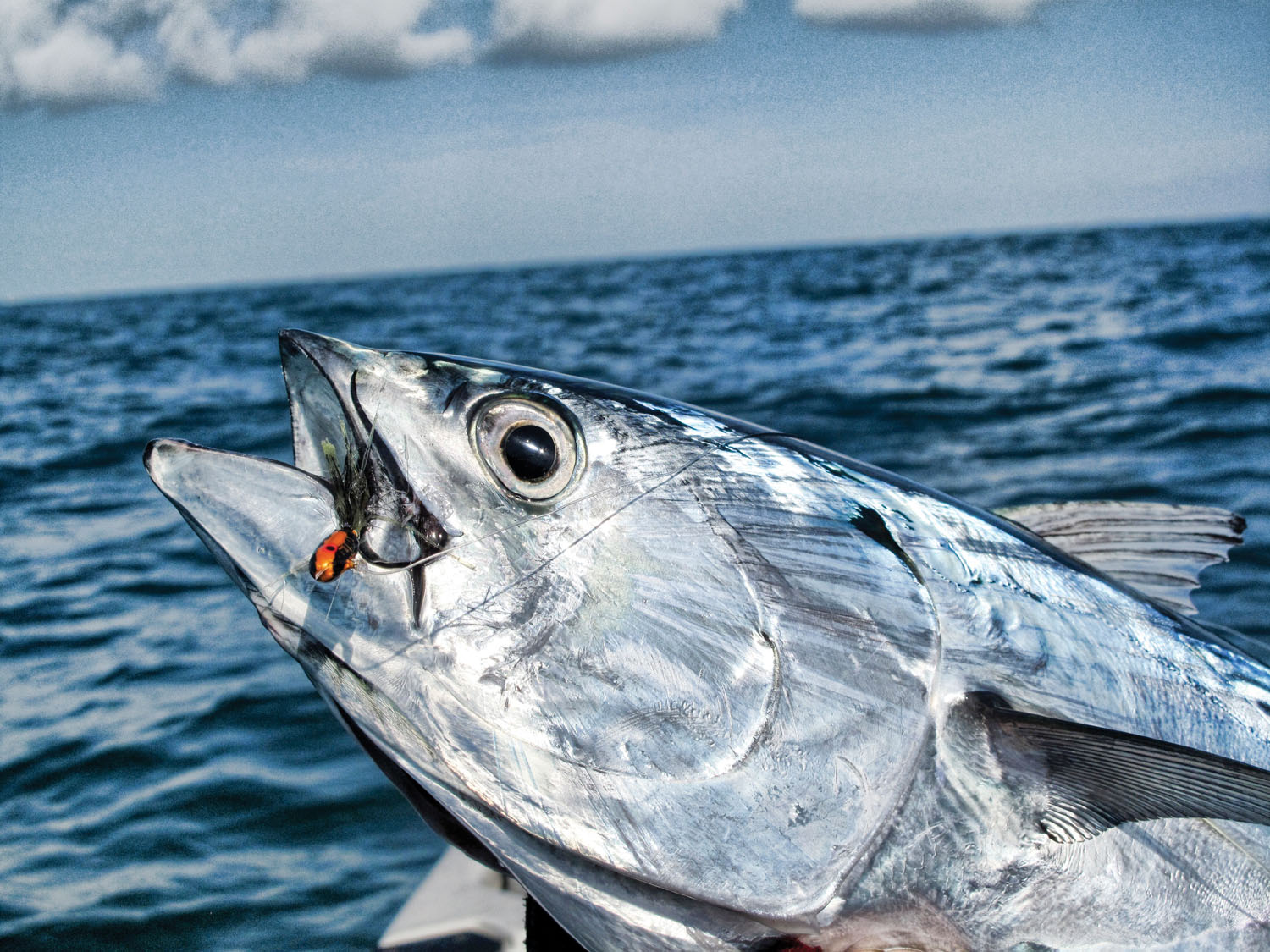 Rare visitors the little tunny; you just never know what might show up in the PINS surf during March.

March is a versatile month in the Texas surf as spring migrations deliver a wide variety of species to target. The list of opportunities includes jack crevalle, red drum, black drum, and sharks. All of this is triggered by the water warming a few degrees. With a bit of luck, we could also see some of the largest speckled trout of the year in the March surf. This truly is one of my favorite times of the year, whether targeting trophy trout from the kayak or in hot pursuit of jackfish in the surf, the possibilities are nearly endless!

Everyone knows that I am one with the surf. A sand man. After three long months of sub-par activity on the beach I am usually beyond excited for this change. My forte being sharks, I rely heavily on migrating baitfish to bring in the large toothy critters. During March, jack crevalle storm the beaches, and with them comes an excellent shot at some of the largest sharks of the year.

During the past two years, we have been spared the scourge of sargassum and shark fishing with both long-rods and kayaked baits has been an absolute pleasure. Even “new boot” sharkers, those who arrived fairly recently and never experienced wave after wave of the menacing weed, succeeded in putting many great sharks on the sand. There is perhaps no greater impediment to shark fishing the surf and we pray for another year of little to no sargassum to enable keeping lines out until time to pick up.

As I have mentioned in previous articles, even though March gives us good shark opportunity, it is curious to me that old-time sharkers never began fishing in earnest until around Memorial Day. With the shark fishery at its peak 40 years ago, we can only imagine what they might have caught earlier in the spring. The present generation of sharkers are graced with newer technology in regards to both tackle and bait deployment. It is a blessing to see that anglers are still able to obtain incredible catches despite a drastically reduced fishery.

In March of 2016, there were two incredible catches. For the first time in Texas surf fishing history, more than one mako shark was landed from the beach in the same month. Brad Tabor and Jessica Repa landed healthy makos, on the same day I landed an early-season hammerhead. Later in the month, Dwade Hickey landed and released the largest (at that time) surf-caught Texas mako and we succeeded in attaching an Ocearch satellite tracking tag for shark research.

Other species of sharks also run rampart in early-spring. Typically, large blacktips are in shallow, and famous for their fierce behavior. Many of these are pregnant females with ravenous appetites, go figure. While not monstrous, any blacktip heavier than 100 pounds is a notable fish. Targeting these beefy blacktips can also result in hooking bull sharks as they too typically tend to move in at the end of March and early-April. Once again, this all depends on how the seasonal patterns develop, warmer will hasten their arrival and colder will delay it.

One of my most surprising March shark landings was a 10-foot tiger. Tigers do not usually begin showing until around May, but this one was caught during spring break along the Padre Island National Seashore. The irony of this fish was that earlier in the day while scouting a location, I noted a large shark on the second sandbar. Could this have been the same fish?

Along with sharks, there are other species that often make surprise March appearances in the PINS surf. Little tunny (cousin of Atlantic bonito) are typically offshore pelagics. However, if water clarity and conditions are just perfect in springtime they will invade the shallows by the thousands. These tuna-torpedoes are pound for pound one of the hardest fighting medium-tackle fish you will likely ever encounter from the surf…think jackfish. The presence of little tunny is also a likely reason the makos make guest appearances in the springtime surf. While timing is critical and they are difficult to catch, even during their invasions, little tunny have been caught from the sand in the past. Very small spoons or flies are your surest bets for these energetic predators. Another bonus during this month of rarities could be the possibility of early-season cobia and king mackerel.

March is famous for its wind and frequently blown-out surf conditions. I was part of a television filming effort three years ago, to showcase shark fishing in Texas. The segment was to be the show’s season finale and expectations were high. We had a week allocated during March for filming. The first three days were catastrophic. The surf was raging and high to the dunes the first day with sargassum washing ashore with a vengeance. It was practically impossible to fish for sharks. Any attempt at getting a bait out would result almost immediately in failure. For the baits we did get out, they would quickly get washed in due to the strong current and weed hanging on the lines. It was very stressful for everybody and the day was scrapped.

That evening a front blew in and the north wind began to rip hard. We ended up fishing the protected Port Aransas jetties in cold water the next day with little action and no sharks to film.

We waited a couple of days and ventured back down the seashore. This time the tide was so high and with fresh weed, we could only make it a few miles down the beach. We ended up turning around and sought another venue to salvage the show.

With the surf impossible to fish and targeting sharks no longer an option, we had to devise a new plan. The bays were peaking with oversized drum activity so we figured, why not turn this show into a real adventure and do what it takes to find some credible fish. I ended up borrowing an inflatable Zodiac and the host, two camera men, and I set forth into the backwaters of the Laguna Madre – loaded down with expensive camera gear and tackle, mind you. The steady wind was throwing salt spray everywhere and there was great concern regarding the cameras. Nonetheless, we made it to an isolated location and began fishing. The first two hours were painfully slow...then it happened.

Casting out whole blue crab we finally had what we came for. We began hooking up repeatedly on some of the largest black drum I've ever seen. These “big uglies” were nothing short of prehistoric in appearance, and for several hours we battled them non-stop. The season finale episode turned out to be a great success, encompassing wild weather conditions and “doing whatever it takes” to find worthy fish. The adventure itself became the show. Reminds me of my personal life and my own fishing career.