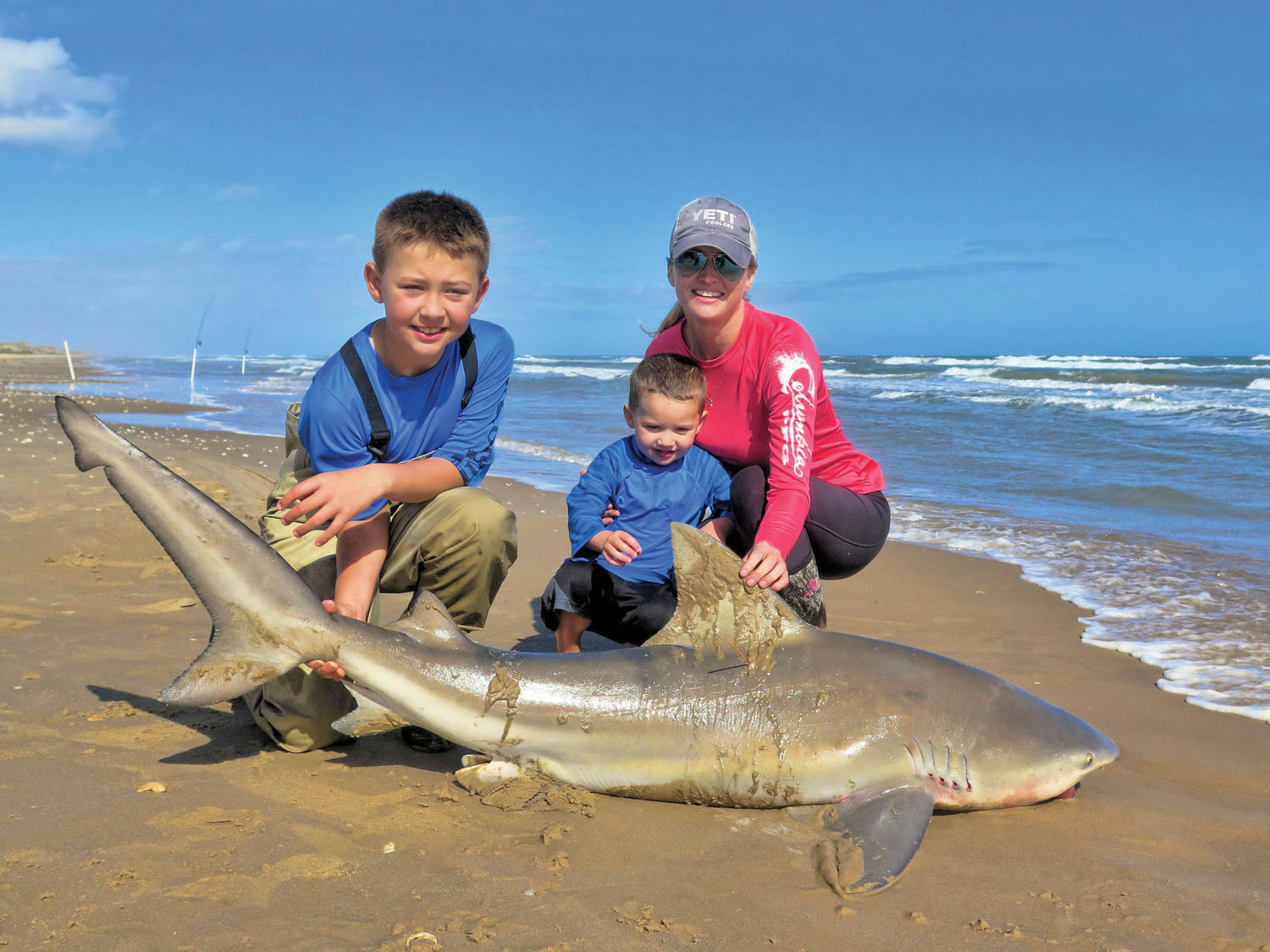 For as long as most of us can remember surf shark fishing has been a male-dominated sport. Generations of fathers raised sons and passed along love for the adventure, danger, and respect for the resource. The final rite of passage came when sons ventured off for a weekend on their own and returned with photos and stories of their first tiger shark. But times are changing. Lo and behold, women are joining the sport in ever-increasing numbers.

The reasons for the rise in female participation vary, ranging from men wanting to spend outdoor recreation time with wives and girlfriends, to the gritty "anything they can do I can do better" mantra. Whatever the reason or motivation, I have recently seen more than a few women making spectacular catches. Some expect and rely on help from male companions while others advance and relish the challenge of doing it on their own.

You would likely not expect a petite 20-year-old to be found fumbling razor sharp shark hooks, covered in slime, prepping a bait. However, this scene is playing more and more often on Texas beaches. Women who can catch, rig, and deploy their own shark baits through crashing surf deserve respect–and they certainly have mine.

A huge boost in female sharking interest no doubt arises from a combination of social media and fishing tournaments. The Texas Shark Rodeo attracts a multitude of surf anglers from all across the state and women have become a part of it. Notable catches and experiences get shared on Facebook. The Rodeo allows up to 5 anglers on a team and naturally, wives, daughters and significant others are added to the roster in many cases. Some may be rookies but many are not. The social media impact of this event alone is enormous.

Historically speaking, hardcore shark fisherman are a rather crusty lot. Rugged and sometimes ruthless, sharkers new and old have a specific way of doing things and they do whatever it takes to get that big fish. I have yet to discover their equal in any other segment of recreational angling. But women dedicated to this sport, strapped into a shark rig battling a giant predator, can be as ruthless and tireless as any man.

Shark fishing regularly requires large baits–often larger than trophy fish sought in other angling genres. Physical and mental stresses are also part of shark fishing but soon forgotten when an epic catch is made. Women are starting to notice this and they are becoming increasingly anxious to prove their mettle on Facebook. Let's face it, a girl in a bikini posing with a large shark gets noticed!

Joking aside, there are some good and beneficial aspects of having a wife or girlfriend on your shark trips. I have a good friend who has fished with me for many years. He started bringing his girlfriend down the beach a decade ago. She joined us on a few excursions but after having a child, never really got back into beach mode. Then recently this girlfriend (now wife of 9 years) caught a shark. Now she is addicted and hardly passes a chance to hit the surf. For my buddy, this is fantastic. She participates in planning trips, helps monitor weather and water conditions, and understands fully the stress shark anglers willingly endure. The upside for my buddy is more quality sharking time. If there is a downside it would be her requesting her own arsenal of shark rods and reels.

The growing female presence in shark fishing is very welcome in my opinion and will do great things for the sport. As with kids, when you see the thrill and enthusiasm on the face of a lady as they have just landed one of the ocean's apex predators, it brings a good feeling to those around.

On my shark charters, the guys will quite often catch the first shark, and the next goes to the woman. It tickles me, the guy's reaction as their girl battles an apex predator on rod and reel. There is a degree of excitement that cannot be put in words, you just have to be there.

Move over guys, the women are coming!