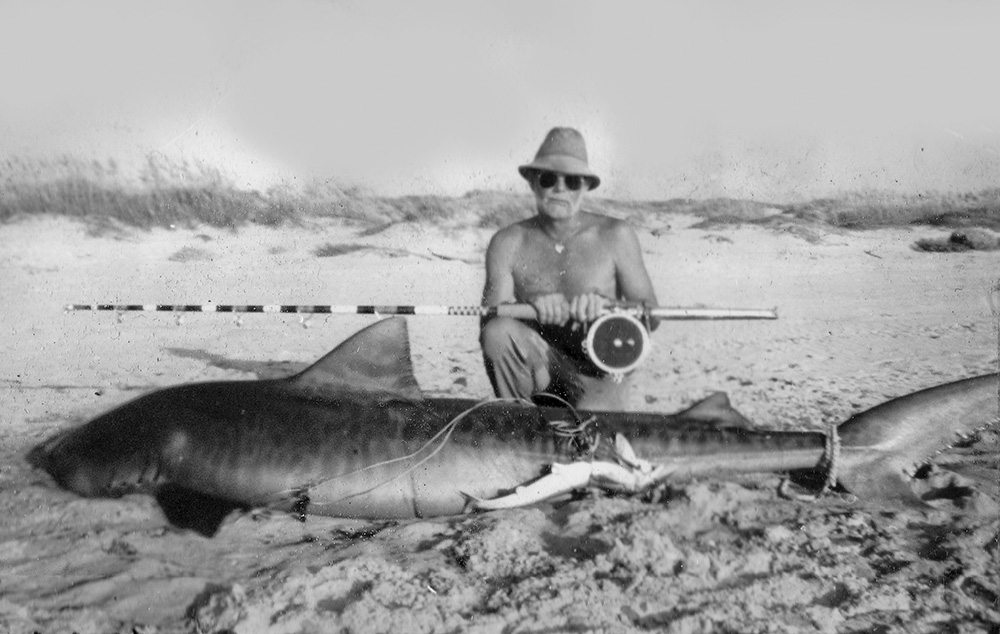 Texas beaches can be a tough place for fishermen, some places tougher than others. Padre Island National Seashore is perhaps toughest of all. Raked by relentless wind more than half the year, not to mention a host of other adverse conditions, Mother Nature constantly tests our mettle. It takes a certain breed.

Your passion and soul must be as salty as the crashing waves. Frustrations mount as you wait hours and days to capitalize on opportunity, but there are definitely rewards to be earned. There are but a handful of individuals willing and able to endure the hardships, fewer still that have done it for decades. Those who do become legends.

On Good Friday 2018, my good friend and mentor, Captain Billy L. Sandifer, lost his battle with cancer. He was 70. Sandifer was my predecessor conducting shark charters on the National Seashore more than twenty years. As many already know, Billy was also a longtime contributor to this magazine. His photos and iconic writings attracted a huge fanbase, touching many lives, including mine.

Billy and I were similar in many ways and he was most responsible for helping influence my lifestyle and what I do for a living. Our conversations would often revolve around about just being one with Mother Ocean and the values of respecting the great creatures of land and sea. From his shark obsession to natural history addiction, from his spiritualistic views to the undeniable passion for outdoor life, Billy was larger than life. Over time he became a father figure to me and I am both blessed and honored to have been so close to him.

I knew of Billy Sandifer before I ever got to meet him. Fresh out of high-school and living in Austin, I was on the verge of moving to Corpus Christi to attend Texas A&M University. I was becoming more independent and making weekend voyages to the coast to (shark) fish from the local gulf piers.

One day I came upon a full-page story in the Austin American Statesman that featured Billy. It told of him catching a variety of incredible fish, including sharks, all from the beach, and it made a huge impression. I began to research surf and shark fishing, poring over everything I could find.

Williams, known in those circles as Beach Bum, organized outings he called Bum Runs, and in June 2001 the first Bum Run was held on Padre Island. I tagged along with the late, legendary rod builder, Artie Hebert. Arriving in Corpus, we met up with Williams at the local island gas station-convenience store. It was the ideal meeting place where you could fill up your tank and get all your last-minute beach supplies.

Talking there in the parking lot, up walked a man who spoke in deep, raspy voice. “Hey there,” he greeted us.

I noticed he was wearing a shark tooth necklace that would rival anything you have ever seen. David and Artie introduced me to the already legendary Billy Sandifer. Somewhat of a shy individual back then, I was too awed to speak.

I was completely mesmerized by their conversation and especially the details of the day’s beach charter he had just finished. Even back then, the way he presented his stories had an overwhelming effect. He made it sound as though the “Big Shell” was the last untamed land and that anyone venturing there would do well to proceed with caution. I shook his hand and off he went as we departed for our journey.

Obsessed with the beach, I moved to Corpus Christi in 2002. When not in class or working at Breakaway Tackle, I was fishing the surf, chasing sharks with a passion. Billy would drive by often, stop to offer a friendly wave, and then drive on. It wasn’t long until he gave me the temporary nickname of Sea Gull; saying I was down the beach more than anyone he knew, and thus I must be related to the sea gulls!

It wasn't until that summer that I landed my first “big” fish from the beach. Not a shark, but a giant tarpon that took a shark bait and gave me a fierce thirty-minute battle. Believing I had a shark, I went out to leader it and noticed the glowing eyes of the behemoth – an honest seven-footer.

A true milestone in my career, that fish put me on the map, so to speak. Billy told of it in one of his articles, touting proudly how I was able to make a successful release. We soon began to enjoy regular conversations and I credit that fish as my invitation to join his very small and heavily guarded circle of friends.

As the years passed we became better friends. He took me under his wing and became my beach mentor. Whenever I had a shark story, nobody seemed to enjoy it more than Billy, and vice versa. Sharks were our bond and in our blood.

Billy, like most shark anglers of the early-era routinely killed sharks. But one day he changed. Perhaps he saw the passion and dedication of the next generation (including me) that led him to feel obligated to promote conservation. Both Sandifer and Williams played key roles in helping turn our sport around at a time when it needed it the most. Sandifer and Williams encouraged us to tag and release our sharks – and we did.

Despite internet drama and a few rebels, they stood their ground. Little did I know at the time Billy was grooming me to be his successor in shark fishing lore. Not too many years later, Billy’s health failing, sharking took a back seat to light tackle surf fishing in his charter work. Still an up-and-comer, I had only begun to excel in the sport of shark fishing. With everything he taught me, I would add a little to the top, becoming more technical and scientific in my pursuit of sharks from the beach.

December 7, 2003 was a day when I believe I made him exceptionally proud. That day marked my first large mako from the sand – tagged and released. Through all his years of dedicated effort, Billy was never fortunate to land a beach mako. Let me qualify that statement by adding that mine was only the second-ever landed from a Texas beach and the first to be tagged and released.

That day when he drove by and I told him about the release, his eyes became the size of jellyfish and his smile the size of Texas itself. Perhaps he saw something special in me, something advantageous for the sport, or maybe just a reflection of himself. Nonetheless, I was and remain humbled by the compliments he gave me. Billy, you see, just didn’t go around complimenting everybody he met.

Billy also introduced me to the world of birding and I have been honored to accompany both he and Mel Cooksey at the same time. To understand that a man so focused on the aquatic world appreciated other forms of nature is awe inspiring to me.

I spent a lot of time at Billy's house and he spoke freely about any and everything. Tales of days of old, upcoming weather conditions or beach ghost stories, it was worth every minute I spent with him. I wish I could have spent even more time with him to absorb even more knowledge.

Billy Sandifer led a rugged and adventurous life and many who knew him lived vicariously through his stories. Billy believed he had spiritual connections to the coyote and the Karankawa. He endured Mother Ocean's wrath like no one else you are likely to meet. His countless days just being down the beaches of Padre Island, blasted by wind and sand and pounded by breaking surf were testament to his will and endurance, and it served him well. When no other soul cared enough about the beach he founded the Big Shell Beach Cleanup, which led to his vision to create Friends of Padre, to insure the work would continue after he was gone.

I was greatly honored this past winter that he accepted an invitation to participate in a TV project I was involved in. Despite his very weak physical condition, it seemed something he really wanted to do, something he perhaps needed to do. To tell his story one last time.

During his on-film interview which is scheduled to air during Discovery Channel's Shark Week 2018, I sat and listened with David Mckee at my side. Billy described from his heart what it had been like “to be” Billy Sandifer – what a tough yet adventurous life it had been – and how he wouldn’t trade it for anything in the world.

His words that day hit me in a way that I understood why the Padre of Padre Island and I were so much more than friends.