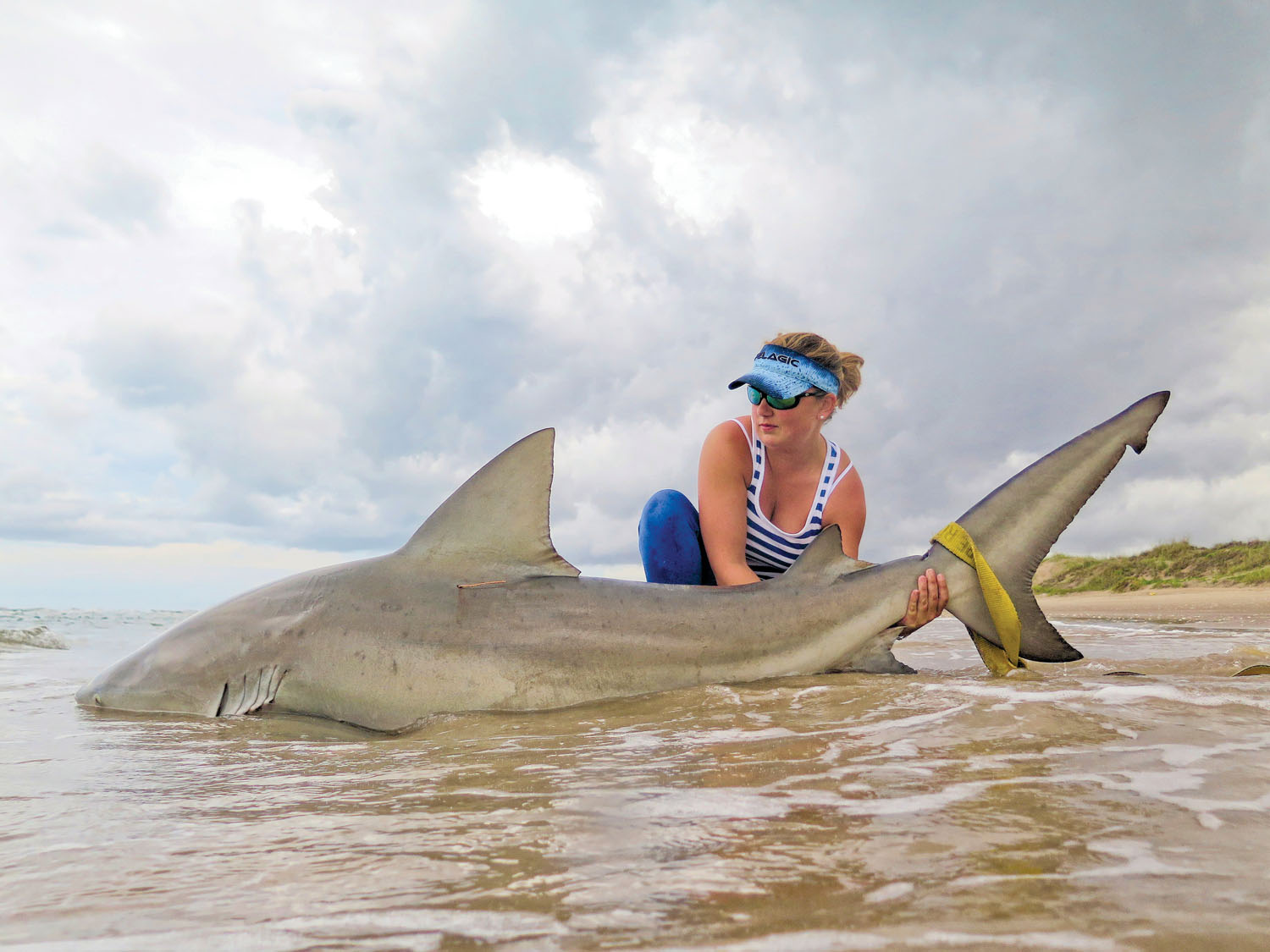 Loren Hollen with a large bull shark – tag and release.

All around the globe marine resources reflect the impact of man. Fisheries of many species have declined to alarmingly low levels. Overfishing, both recreational and commercial, have diminished stocks that were once abundant and readily available to target. From the smallest crustaceans to the largest of game fish, especially sharks, nearly all species have taken a hit in some proportion. The role that the state of Texas (Texas Parks and Wildlife in particular) has taken in conserving and protecting our resources the last couple decades has produced a benchmark for other states to follow. Texas provides some of the best fresh and saltwater fishing available anywhere, along with world-class waterfowl and quail hunting. Many of us grew up learning and enjoying this outdoor way of life, and hope to see it conserved for future generations.

My entire life revolves around the water. The fascination and desire to be "part" of the water burns within me. Having been acclimated into this outdoors lifestyle as a youngster, I have noticed and studied many things. I have encouraged conservation within the sharking community for well over a decade, but this is not the only area I have studied. Our flounder stocks, for example, have been all over the place. Through TPW's implementation of seasonal closures on gigging and reducing bag limits for recreational and commercial fishermen across the board, flounder numbers have accomplished a marked rebound.

Gulf of Mexico red snapper are another species of great interest to me. It was not very long ago that federal fisheries managers declared snapper stocks to be seriously overfished. Extremely short seasons and reduced bag limits were implemented and in a very few years we are seeing what some are calling an overstock situation, at least from an angling viewpoint. On some offshore structure, snapper are now so numerous that is impossible to get a bait down to other bottom species. Conservation is truly a power thing!

So, let's now take a look at sharks. Sharks occupy a very important ecological niche in our oceans and no other aspect of sport fishing compares to the mystery and power of predatory giants on the end of your line. This is the second year in a row that our coast has been virtually clear of nuisance sargassum seaweed an incredible boon to land-based shark angling. Perhaps as a direct result, the popularity of shark fishing in Texas has risen almost exponentially. There are currently more fishermen than ever soaking baits and catching toothy creatures.

Many are participating in tag and release programs encouraged by National Marine Fisheries Service and organizations such as Harte Research Institute. It would be impossible to place a value on the data that is being gathered. Science owes a big thanks to people like us that participate. While at times they don't express it as often or loudly as you might expect or hope, I personally, on behalf of the scientists, would like to thank every individual that willingly participates in the tagging and release of these magnificent creatures.

Due to the number of anglers currently fishing for sharks and the numbers being caught, an incredible amount of valuable data is being collected, yet all is not sunshine and flowers for our shark fishery. This year alone a large number of sharks have died, whether intentionally or unintentionally, through the actions of anglers. With so many shark baits in the water these days, people will end up catching some large specimens. Unfortunately, at times, large specimens do not survive the release. Large great hammerheads are notorious for this as they essentially blow their heart out during the fight. This however is not something the angler deserves to be blamed for. Hammers are simply genetically disposed to fight to the death. The odds of successfully releasing a hammer greater than ten feet in length are actually very small. I recently landed a massive greater with full intention to satellite tag and release, but the revival effort was not successful. It is very unfortunate when this happens, but it does happen. Anyone who participates in tag and release shark fishing either already knows this or needs to know this fact.

The individuals who regularly practice catch and release on sharks make up a huge percentage of anglers that target them. That alone is an amazing accomplishment for conservation. However, there is still a breed of anglers that grew up killing sharks (for trophy and meat) and continue to do so. To get to the point - this is practiced primarily on gulf piers which are currently overrun by sharkers.

My introduction to shark fishing many moons ago came on these same piers of the Coastal Bend and I have witnessed firsthand the mentality of the piers. Since before the 1950s, piers were the best known hangouts for shark anglers. Shark numbers were of no concern and were considered over abundant and dangerous to humans. Thus, virtually ALL sharks landed in those days were killed. Most were jawed and moved to dumping grounds. In retrospect it was quite unfortunate, but it was the way it was done back then. To this day coastal restaurants and touristy establishments have faded photos of large sharks hanging alongside the piers. Historically, these images are incredible and important if for no other reason than to demonstrate how far sport fishing has evolved.

Today, the gulf piers of the Coastal Bend remain the favored fishing grounds of shark slayers who have yet to evolve in sporting ethic. Even pier anglers intending to release large sharks are often unsuccessful, due to having to drag it all the way to the beach from the end of the pier. Social media has been blowing up with dead shark photos and this is not good for the sport, especially when some pier anglers engage in belittling anybody attempting to practice catch and release.

These are not bad people, they just have not caught up with the times. While the majority of these anglers are legally harvesting sharks, it all comes down to a moral issue. With a lot of bad press looming, more and more are beginning to see the light and realize how important the release of every large breeder shark truly is. With illegal shark finning running rampant in the Gulf of Mexico, our sharks need more protection today than ever before.

I have a very good friend who killed giant sharks for decades, and recently changed his ways. He saw what others were doing and his comment was, "Today's cameras can get you an incredible picture of you and your catch. A living shark is far more gratifying than any set of jaws." I believe that if this iconic shark fisherman can change his ways there is hope for the rest!

For anyone desiring to learn more about shark research in Texas, visit Center for Sportfish Science and Conservation on Facebook or their website: sportfishcenter.org.