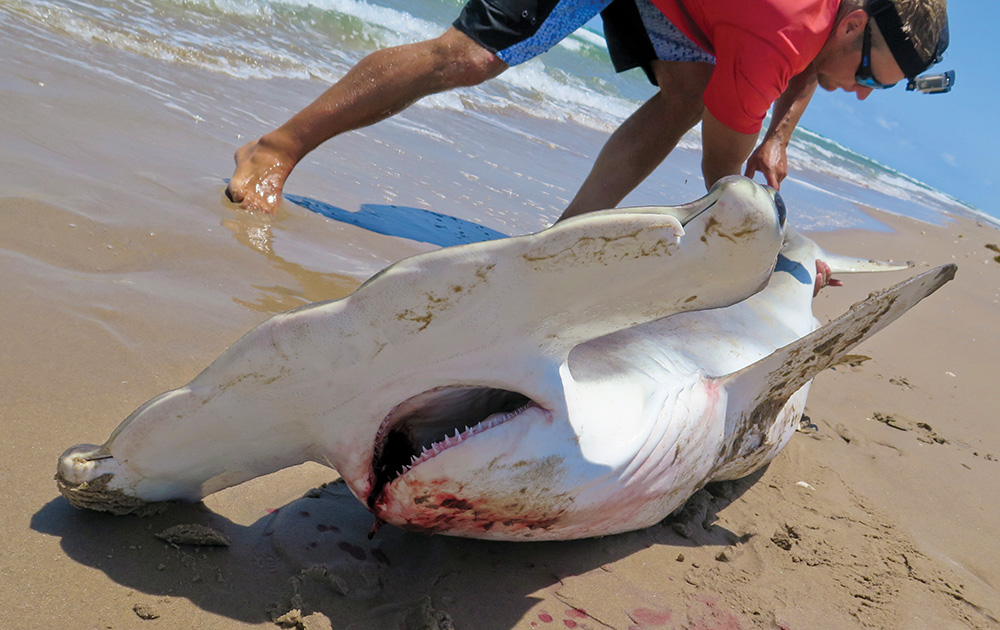 The glare of the early morning sun reflects from the rolling surf as the salty aroma of the sea, borne on the spring breeze, lends a surreal quality to the adventure that lies ahead. Wading to Padre’s first bar, you heave a mighty cast, launching a whole whiting into the gut farther offshore. Anticipation runs high that it will soon be demolished by a large predator.

All around, the atmosphere is filled with energy and life. Birds, animals, and marine life are all active along this stretch of beach. Your senses are on full alert as you shuffle gingerly through the waist-deep water to avoid stepping on a hidden stingray.

Back on the sand, the waiting begins and your mind wanders, drinking in the beauty of the setting. The closest camp is miles away. Solitude can be overwhelming. Your thoughts stray from your rod standing in its holder as you become immersed in nature.

Suddenly the clicker screams and line hisses from the spool. The Zen of the moment is replaced with the reason you are here. A springtime hammerhead has taken the bait!

Hammerhead sharks are some of the most impressive and uniquely designed predators swimming in the Gulf of Mexico. Here in Texas, we have an annual spring migration of scalloped hammerhead sharks (Sphyrna lewini). While not enormous giants, like their great hammerhead cousins, this species attains a respectable length, pushing 9-feet and up to 300 pounds.

In the surf zone, hammerheads cruise the shallow guts chasing a variety of finfish and rays. Interestingly, the greatest majority of scalloped hammerheads are male. The scientific community has yet to determine where the females remain, but data suggests far offshore - with many hanging along the continental shelf.

In south Texas, we have about a six-month period where we regularly have the chance to hook into one of these sharks from the beach. However, the absolute best time to encounter this speed demon is during the month of April. A combination of water temperature, currents, and bait activity brings the largest concentration of this species inshore, from late March into early May.

All species of hammerheads have small mouths compared to the size of their bodies. Presumably an evolutionary adaptation to accommodate their alien-like hammer. The advantage of this for the species is that their electro-receptors, spread across the hammer, are afforded greater surface area. Enabling them to detect stationary prey, such as partially buried stingrays.

Think of it as a metal detector with a 2- to 3-foot wide wand scanning the sea floor. Far more efficient than the sensory capacity of a shark with barely 1/3 the surface area. The only downfall for the hammerheads are the smaller than usual size of their mouths. Because of this, they are unable to gulp down large prey as bull and tiger sharks are capable of doing. But don't be mistaken, hammerheads have a huge appetite.

When they manage to hunt down a large stingray, they simply chomp at it piece by piece, until the entire fish is consumed. Given the size of their mouths, the majority of their prey is rather small. An 8-foot scalloped hammer may feed exclusively on whiting or injured pompano less than 12-inches long.

The incredible thing about this species of hammer is that they readily feed so close to shore, making them an ideal target for beach anglers. We have caught them in extremely shallow water, on small baits such as whole mullet when pursuing jack crevalle and large red drum. Many anglers accidentally hook into scalloped hammers on lighter tackle, only for the gear to get vaporized in a few seconds.

I always tell people that it is essential to have at least one casted shark bait in the camp. You could kayak baits out as far as 500 yards, but that could be completely pointless if the majority of the sharks are running the first and second gut, targeting easier prey.

Hands down, in my experience, the best baits for catching scalloped hammerheads (of any size) are whiting. The bigger the whiting, the better the chance of a larger scalloped hammer. Another trick I have developed for times when the whiting are running small, is attaching two or three with zip ties to a single circle hook. You might be surprised how well it works. The only disadvantage to using fresh whiting is that blacktip sharks greatly outnumber the hammerheads. Thus, you will likely have to weed through a few. In the end though, if you want a scalloped hammer, this is what I recommend.

I have been very fortunate to work in partnership with the Harte Research Institute out of Corpus Christi during recent years, and have participated in extensive shark tagging studies. In my volunteer efforts, I have tagged several scalloped hammerheads with SPOT satellite tags - (Smart Position and Temperature Transmitting). The data collected has been invaluable to the scientific community.

It seems the majority of tagged specimens cruise up and down, just off the Texas coast. On occasion, some will venture down towards Mexico, which has been labeled the danger zone. A specimen dubbed Einstein, tagged by Harte and tracked through Ocearch, repeatedly pinged location to tracking satellites (occurs whenever the dorsal fin and SPOT tag breach the surface of the water). This particular shark was transmitting actively just off South Padre Island, with numerous pings from within the same region. Einstein’s final ping was recorded nearly two hundred miles away in a Mexican port, presumed to have been captured and transported by a lancha fleet that been fishing illegally for sharks and other species in U.S. waters.

Despite the unfortunate demise of Einstein, we would have never known this shark had been illegally harvested without the aid of today's technology. Tagging of sharks, and in this case satellite tagging, can provide a great deal of information to help us better understand and enhance the future of the species.

More about my personal contribution; we release all hammerheads landed on my shark fishing charters and, thankfully, many of the younger generation of shark anglers are doing the same. Unbelievably, social media is indirectly responsible for such acts of conservation. Individuals who might have otherwise killed their sharks and paraded them through town for notoriety are now sharing tales and photos on Facebook and Instagram and releasing incredible catches. The ability to share man versus beast videos on social media may end up becoming a wonderful and unexpected conservation tool.