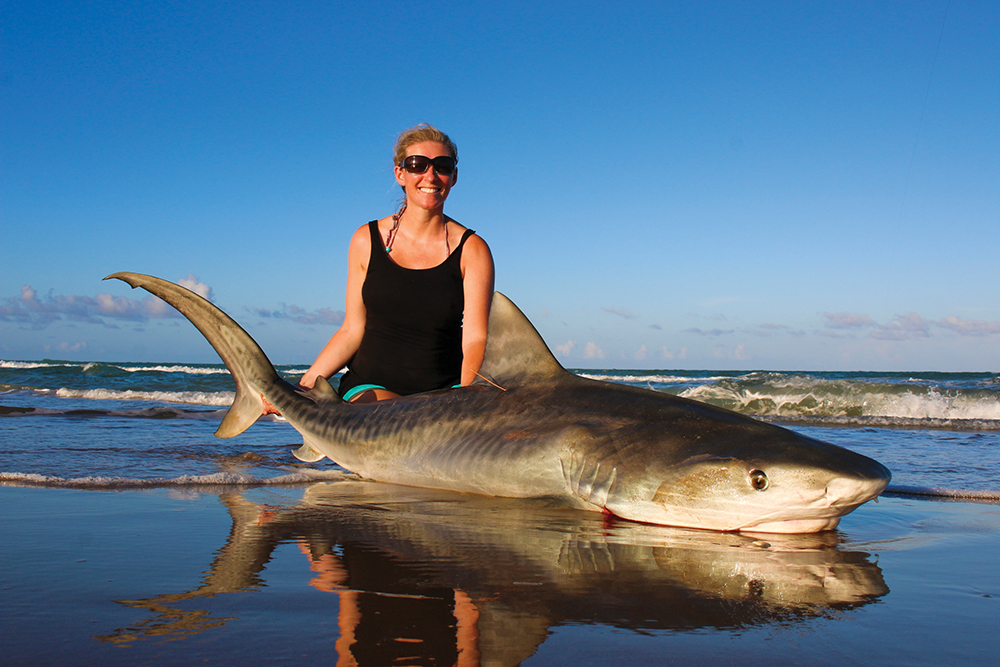 Alexis Anthony with her first-ever tiger. Tagged and released on PINS beach.

Chinese astrologists may be celebrating the year of the dog, but here in the world of Texas surf angling I think 2018 would easily qualify as the year of the tiger – tiger shark, that is. We hope for a smattering of tiger landings each year but anglers all up and down the Texas coast have been bringing an astonishing number of tigers to the sand recently.

Amongst all the shark species that sport anglers pursue, the tiger shark (Galeocerdo cuvier) is revered almost universally at or near the top of the list. Voracious feeders, equipped with uniquely serrated cusped teeth, tigers can slice and crush the bodies of prey that other sharks seem to ignore – even large sea turtles with their armor-like shells are not safe. Voracious in their scavenge feeding, groups of these “trashcans of the sea” have been documented to consume entire whale carcasses. Stomach contents have included automobile tires…of all things.

While typically regarded as an offshore species, certain weather and water conditions will change their patterns to include roaming the shallows of the surf zone where they feed primarily on stingrays and a variety of finfish – quite often individuals wounded or weakened in unsuccessful attacks by other formidable predators. Adding to the angling allure, mature females in our area can grow to lengths exceeding twelve feet.

There has been considerable speculation as to why we have enjoyed so many tiger landings the past few months, and while nobody can cite a single contributing factor, I tend to believe it is a lucky combination of several variables. And what about angling effort?

Do we somehow suddenly have more tigers in our waters than the historic average? Or, apart from and/or along with this, might it be that we now have a generation of more dedicated, better educated, and certainly better equipped shark anglers? Anglers who by virtue of advanced qualifications and equipment are landing a greater percentage of “the ones that used to get away?”

It is no secret that land-based shark angling in Texas is currently soaring in popularity – just stroll or drive along any beach. And while there, take note of the tackle being used. I call it the “big gear” kick. The biggest and baddest rods and reels money can buy used specifically to target BIG sharks.

Talking with biologists, marine scientists, and also veteran shark anglers, theories are evolving regarding recent tiger shark abundance along our coast that include our normal populations being augmented by individuals migrating from less-desirable habitats in other regions. The popular culprit in this are the algal blooms that have enveloped much of Florida’s normally pristine and semi-tropical coastline this summer.

Florida is currently and HAS been enduring a red tide outbreak of here-to-fore unseen proportions. Red tide (Karina brevis) is a naturally-occurring concentration of microscopic algae that produces a neuro-toxin, known to paralyze breathing muscles of fish and marine invertebrates. Fish and other animals unable to escape this noxious bloom will invariably perish, sometimes in great numbers.

We’ve seen it many times in the past, right here in our own gulf waters and bays. Millions of dead fish floating and washing ashore. The stench is horrible and the deadly aerosols of wind-stirred toxins cause respiratory irritation in mammals, including humans. Luckily, we have experienced no significant outbreaks this year, but we’re certainly due another, according to historic records.

So, in keeping with the recently-emerging theories, are the red tide outbreaks off Florida contributing to the recent abundance of tiger sharks along our coast?

While this would likely be impossible to prove in a scientific sense, most agree that it could definitely be a contributor. Sharks have the capability of being highly-migratory. Studies suggest that some species are mostly semi-residential while others regularly travel great distances annually. Red tide is simply a plague. If sharks are within areas of the “toxic” water, they will move in search of more suitable habitat.

Sharks are not traditionally seen eating red tide-affected fish, still writhing in death throes, or dead fish floating or lying on bottom. In fact, if it might be possible, it’s as though they have been programmed by nature to avoid them. Whether these sharks are smarter than we realize or perhaps a natural response, they generally flee the red tide, especially areas that have been affected for prolonged periods.

With the large sharks likely moving out of the area, they have to go somewhere. It is believed a good portion of these sharks have traveled around the gulf the past few months and joined our population of sharks here in Texas.

Why stop in Texas? Our coastal waters are extremely rich in nutrients, which kicks off the food chain from the bottom up. Our aggressive weather patterns, prevailing winds, and offshore currents that are very unique to our coast result in very healthy fisheries for us to enjoy. This alone would be a reason for these sharks to make a prolonged “pit-stop” to escape the wrath of red tide.

Getting back to the angling aspect – our shark fishing has been absolutely off-the-chart in 2018 compared with previous years. From early-August onward we have seen more tiger sharks landed than ever before. Many anglers who have never caught or even witnessed the landing of a tiger have fulfilled their dreams this year.

Tigers have been landed from the northern reaches of the upper Texas coast all the way down to the southern tip of Padre Island. While most specimens have been in the 7 to 9-foot class, there have also been many 10 and 12-footers. A 10-plus tiger is usually a mature fish and very robust in every aspect. I have hooked some of the largest tigers of my career this year and, while not succeeding in landing the largest of these, I have landed multiple specimens greater than 10 feet. This elusive species is not an easy shark to land; thus each encounter is beyond special to me.

While nothing is ever certain in shark fishing, there is a good chance we may never see this kind of tiger action again in our lifetime, especially if normal sargassum patterns return in the future. For many years we have been envious of Florida and their phenomenal shark fishery. Well, right this minute, the script has been flipped and we have become the mecca of shark angling. While we are very happy in the western gulf, it came at a price as the general fishery off Florida will have to undergo rebuilding for some time to come. Lucky for us, these tigers and other large sharks will be available along our coast until early December.

This is an exciting time for all anglers and especially for me in my charter efforts to put clients on lifetime specimens. Being able to see and handle these awesome creatures is both highly educational and awe inspiring, even if only a very brief time before they are released back into the wilds of the Gulf of Mexico. Enjoy this incredible period while it lasts!