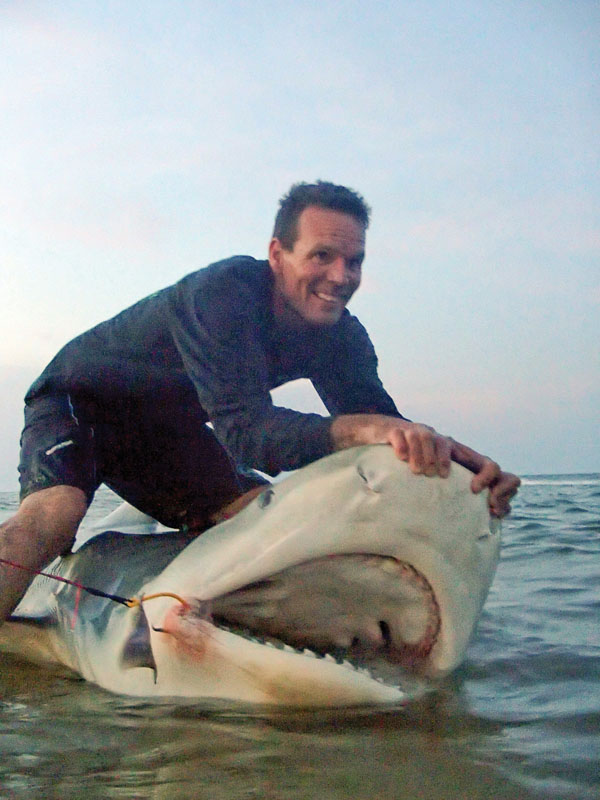 Note the circle hook in the corner of the mouth. Testament that conservative principals work and most definitely have a place in modern-day shark fishing.
As this year has progressed, the level of uncommon catches by surf anglers is running at an all-time high. The menacing sargassum seaweed continues to remain absent and surf anglers have been able to fish at will. Here in Texas, heading into the fall fishing season, we are experiencing a truly historic "sharking" year, rivaling the golden age of 1960s and 70s fishing. The year began with phenomenal springtime action; exceptional numbers of hammerheads, both scalloped and greater. This was followed by a host of "toad" bull shark landings with impressive 8 and 9-footers being very common. As mid-summer approached and the opening of Gulf shrimping season, the sharking slowed in general however, the highly-sought after tiger sharks moved in and were aggressively hungry!

In this 2-part article I will present two separate very different tales of grand fishing achievement. Here in Part-I, I will cover a story of unparalleled accomplishment for a very deserving individual – good friend, Steven Kennedy.

Steven is the founder and owner of Catchsharks.com, a Texas company that came on the scene several years ago, aimed at promoting conservative shark fishing practices and methods. His custom shark and big game leaders are built with unmatched quality and durability. I have been very grateful for his support and the ability to use and endorse his top-of-the-line gear since Catchsharks' earliest days. Unlike mass-produced terminal tackle, Steven's gear is handcrafted to a degree not seen elsewhere in the commercial market. Steven's leader materials are all of very high-quality, but it is the craftsmanship that sets his products apart. These are the only shark leaders made with such precise attention to detail – crimps are shrink-wrapped and the swivels and conservation-minded circle hooks are powder-coated for long service. What Steven has done for the shark fishing community over the past few years is truly award and recognition worthy.

Steven resides on the upper-coast, mainly calling the beaches of Matagorda and High Island home. The medium-sized shark fishery is superb for much of the year in the surf along those shallow shores and Steven has been able to test and optimize his gear through countless days and nights camped on the beach with occasional journeys to Padre Island. On Padre, the closeness of the continental shelf creates the famed Devil's Elbow, a region rich in nutrients delivered via powerful offshore currents. The food chain in the Devil's Elbow is massive, from the tiniest of plankton to the largest oceanic predators, and South Texas is truly the "big-boy shark capital" of the western Gulf of Mexico.

Steven's adventure that I'm about to relate occurred recently in August; a solo fishing trip that produced a game changer – not just for Steven, but the whole of the Texas shark fishing community.

Late afternoon of August 13, Steven's 50W marlin-class reel began to slowly yield drag, creeping "toward Cuba" as sharkers say. Anxiety grew as line continued to disappear and he held little doubt that this was "his" shark, a reward for years of promoting conservation and safe handling of sharks with a goal of catch and release.

In Steven's words: "I could feel her consistently heavy stride as she continued to pull line off and I was growing concerned. I started the battle with a bait about 600 yards out and now she was an additional 500 yards into her initial run. She was pulling about 42 pounds of drag – with no indication that she cared or even knew I was there. No headshake, no change in speed, just a steady powerful stride."

As I can personally relate, the incredible feeling of hope and uncertainty, being hooked up to an unknown behemoth, is indescribable. It's what sportfishing is all about and it possesses a gripping effect on anglers. It is a combination of mystery, power, and uncertainty that shrouds the individual in an isolated bubble of time and great adventure. Fish THIS BIG do not come along often and, when they do, you immediately become immersed in the greatness of the situation.

As Steven was discovering the enormous power of this shark, his intuition said he would have to wait until the time was right before attempting to turn her toward the beach. Finally, with the 50W's spool desperately narrow – it was time!

"Being a one-man camp, I knew I would need help," he told me. "I began flashing S-O-S to the neighboring camp with my spotlight. I could see their silhouettes but they were about a half a mile away and with the late-afternoon sun I could only hope they would see it."

"I have always been a very conservation-minded and I took a lot of criticism as I built my business based on conservation. My mind was already racing, how much a catch like this could mean in promoting it. But, I would need a healthy release," he added.

As fate would have it, the neighboring camp recognized his S-O-S and came to Steven's aid as he was well into the fight. However, having help arrive is only part of it. There is still plenty of strategy involved in successfully landing and releasing a fish of such magnitude, especially with a volunteer crew of "new" friends.

Two hours and twenty minutes of incredible tug-of-war later, Steven brought the majestic shark into leadering range. He was very lucky to receive complete cooperation from the neighboring campers and passersby as it was finally time to land the beast. Steven's tiger taped out at 13-feet even, one of the largest tigers landed from the PINS beach in perhaps 30 years.

She was healthy and appeared as though she had pupped very recently. The unplanned volunteer crew worked quickly in helping with tagging and collecting genetic samples for research. The release was storybook. Steven watched her swim away in the fading daylight like the final scene of an epic movie.

As I have always said, modern day hardcore sharkers are a special breed, the hardiest of the hardy in the angling world. We break boundaries and do what it takes to achieve that level of accomplishment. The elite few of us fortunate enough to have had face-to-face encounters with not just giant sharks, but some of nature's most impressive life-forms, can relate to their own personal moments. These moments are what spawn the awe-inspiring stories that are told generations over. For Steven, I believe this fish was a product of karma and his story will be relived for quite some time to come.

To land and release a 13' tiger from a Texas beach leads us to believe that perhaps these legendary monsters somehow did escape the heyday era of Texas sharking and are more present in our waters currently than we realize.

Stay tuned next month for Part II of Tiger Tales. A story of youth triumph – David vs. Goliath shark fishing.