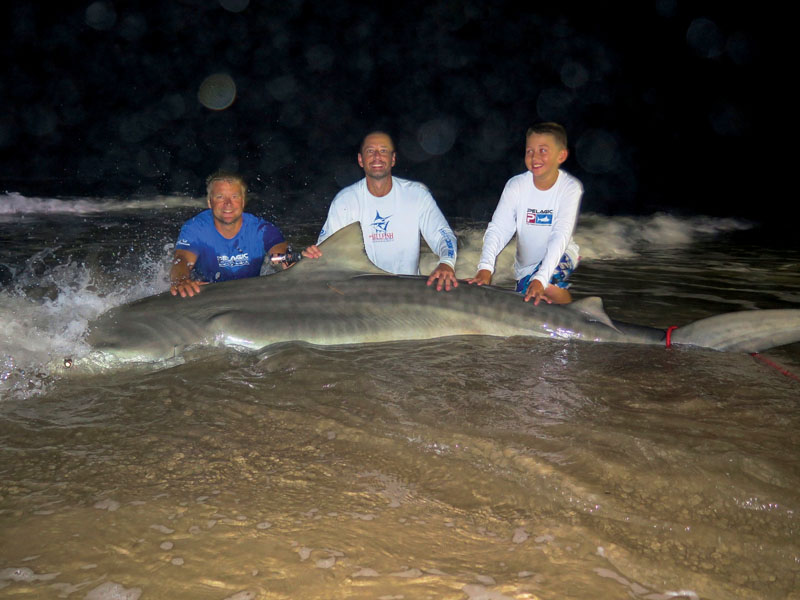 The first nine months of 2015 have yielded some of the best surf fishing in memory. However, as Newton's Third Law states, "For every action, there is an equal and opposite reaction."

I guess it was inevitable, that catastrophe would eventually appear in some mischievous form. Around mid-September we experienced a strong red tide outbreak and Padre Island was transformed into a graveyard. The toxic algae was thick in the Big Shell for weeks, killing everything that swam in it. This natural biohazard has happened many times in the past and will continue in the future. Mother Nature always rebounds and we are very fortunate that it was not worse. Thankfully the red tide came when the water was at its warmest, a time of minimal predator and bait migration. As the red tide vanishes, I am optimistic we will regain the quality of fishing that fall usually brings us.

Just prior to the red tide we were in our late-summer big-shark run. Tiger sharks love feeding in the darkness of grease calm nights. While challenging, it is one of my favorite times of the year and usually you either get a phenomenal fish or the action (more often than not) can be flat-out dead. Late-summer is tough and it is really a crapshoot until the fall migrations kick off. With tiger-time in full effect, your chances of getting one may be at their best.

It was then that one of my regular clients, the Nicolau family, had booked one of their regular overnight trips. This trip coincided with the late-August full moon, one of the most optimal times to pursue large tigers. It was also young Reid's tenth birthday. Reid, who you may recall from a previous article, has two passions: baseball and big game fishing. He is remarkably good at both and with each surf trip he continues to amaze me. But on this trip he was not interested in bull sharks or energetic blacktips. Reid wanted a tiger for his birthday.

A tiger is a tall order for a guide to produce, especially for a kid. The chances of landing one on an average shark trip are extremely slim. All I could do was pray for a miracle. Many factors were aligning though–moon phase, tides, water temperature and clarity, and bait presence–as good as it gets for getting a client on a tiger.

Optimism ran high but, unlike the fall charters John (father) and Reid usually book, the action was expected to be slow during the day. Interestingly, the morning fishing surprised us as Reid almost instantly landed a blacktip with another coming within a few hours. Fishing slowed through the hot part of the afternoon; we took a break but left baits out. Toward evening, Reid got a bull shark. Just before dark I deployed an array of large stingray baits.

The full moon was rising over a calm surf as I finished setting the night baits and what a beautiful sight to behold. The entire beach was illuminated as if by a heavenly nightlight, a perfect setting for our campfire dinner. Sun-drained from the day's events, we crashed early.

The night remained quiet until roughly 3:00 AM. Come the witching hour, one of the largest baits was picked up and pulling drag. It stopped as instantly as it began but had my full attention. Thirty seconds passed and the line started moving again. Reid climbed on the platform with the clicker sounding slowly. I told him to be patient, "Let's make sure the hook is set."

Several minutes passed and I told him, "Game on!" I was certain it was a tiger by the way it was acting but kept it to myself. Trying to get Reid harnessed-in was not possible due to his size. He would have to battle the fish from the rod holder.

With everyone else still asleep, I told Reid we would wake them shortly but, at that moment we needed to maintain a sharp focus on the fish and prepare for a lengthy battle. I wanted to be able to coach him through the psychological fundamentals of fighting a monster with no distractions. The fish was swimming as it pleased and I knew it was important to avoid rushing things.

"Let the fish run until it stops," I told him. "Trying to force it or reel before then is pointless."

Reid followed each instruction perfectly. I told him we had a good shark on the line and that he needed to reserve his strength for a long fight. "If you cannot handle it or need to back out," I told him, "I need to know it now."

His response was direct and simple, "I got this."

By the time John woke up and got to the truck, the shark had been slowly running for 20 minutes. I exclaimed to him that this is it, the "big boy" we have been looking for. They all speculated as to the species but I already knew.

A half-hour passed and the fight settled into classic tug of war. I knew the odds of Reid landing it hinged greatly on him being able to turn it on its initial run. He would slowly gain one or two hundred yards of line, only to see it disappear. Frustrating, no doubt, for a 10 year old. I assured him it was perfectly normal on a big fish and just try to stay focused. I prayed that he could endure the fatigue.

The shark dominated at will but was finally slowly showing signs of tiring. Two hours into the battle Reid had cranked it within a couple hundred yards. This zone is like a wall for the fish–get through it and you're golden. This one was stubbornly avoiding the second sandbar.

After countless attempts, Reid finally managed to break the barrier with the shark coming closer to the beach. As expected, the shark reacted the same way at the first bar. At times this stalemate was shrouded in considerable personal doubt but, for Reid's sake and the possibility of landing this fish, I had to remain 100% optimistic. Each time the fish would move he would inch it closer to the beach. By now, Reid was almost three hours into battle, running on pure adrenaline. I've seen grown men sink to their knees at this point, totally spent, throwing in the towel. Not Reid.

Showtime! The shark was atop the first bar. I enlisted Antonio to assist with tail roping if need be. Down in the water I waited as the fish made its last few runs back and forth. John was up on the platform coaching Reid. The shark swam again to the bar, might be my only chance, I thought.

As with any shark, there is a high degree of danger for those in the water. At night, with one of this size, the danger is amplified. I managed to get hold of the tail and somehow get the rope around without issue. Antonio and I then did everything we could to drag it to the edge of the surf. Doing so, I notified the crew that they officially had a tiger and she is massive!

Reid climbed down and ran to the shark. Tired, sore, and at a loss for words–wearing the widest grin you'll ever see on a ten-year-old.

We all pitched in to tag, measure, and photograph the catch as quickly as possible. The feat would not be complete without a successful release. Reid's tiger stretched the tape to an incredible 11-feet 8-inches. I opted not to waste precious minutes making a girth measurement but comfortably estimated her to weigh more than 700 pounds.

The most impressive fact in this story is that Reid had singlehandedly battled this fish through the entire three hour fight.

Antonio assisted again in the release. Dragging the shark over the first bar, we got her turned into the current and with a great shove, we watched her swim off into deeper water without hesitation.

Everybody cheered and slapped high-fives. It was, after all, Reid's birthday.