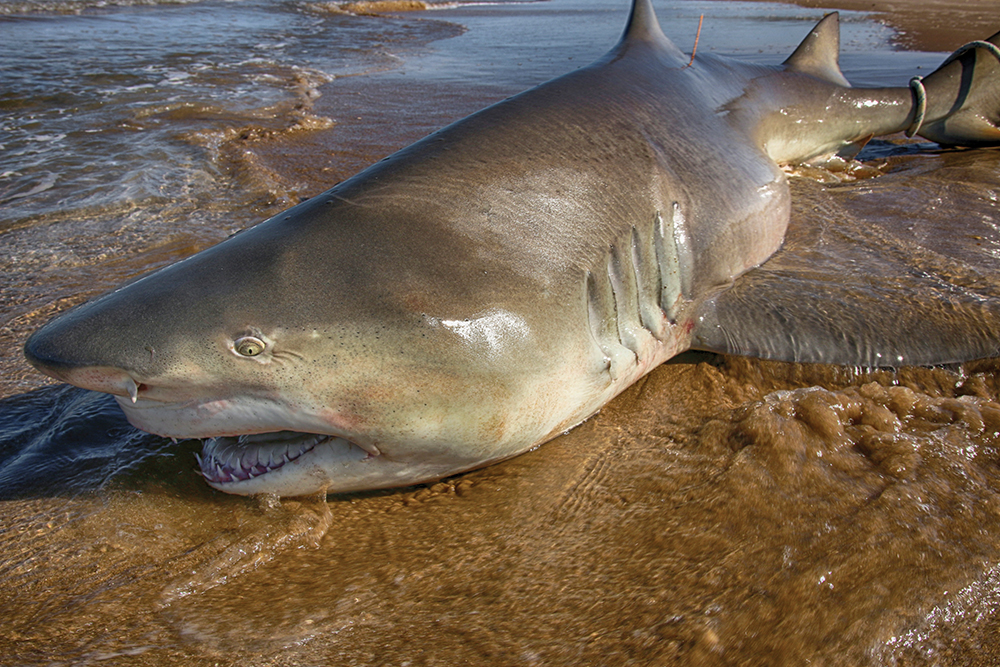 Perhaps one of the greatest advantages Texas surf anglers enjoy over counterparts on other coasts is that we get so much time to prepare…waiting out unfriendly weather patterns. What keeps us going is the knowledge that the fishery will be phenomenal as soon as the weather gets right.

The unusually cold 2018 winter lagged into a sputtering spring season. Even March fishing was abnormally slow. Jack crevalle were scarce when they should have been frenzy-feeding along the beach. Sharks, aside from leftover winter sandbars, also seemed reluctant to move inshore.

Light finally appeared at the end of the tunnel in mid-April as cold fronts began to lose their sting. Southerly flows began to send us warmer currents and water temps slowly began to rise. Continued lack of sargassum heightened our expectations.

Ever eager to collect shark baits, on April 18, I embarked on a jack crevalle mission. I ended up at the Port Mansfield jetties and found the water churned to chocolate milk by strong north wind. My original plan was to toss lures for the jacks and waited until almost sunset, but they never showed. I finally noticed activity in the middle of the channel as fish were blowing up menhaden and mullet in the raging current. In my head, I kept thinking, “Man, that sure looks like tarpon.”

I resumed my plugging and my lure was smashed as a silver missile of maybe 100-pounds shot from the water. I was speechless as tarpon landings in mid-April are virtually unheard of.

I continued plugging and jumped another tarpon, this one straightened the hook. Another made three jumps before spitting the hook. Frustration mounted as fish after fish came unbuttoned. Finally, I managed a solid hook up and spent 15 minutes hopping rocks like a mountain goat, trying to subdue the tail-walking five-footer. Being solo on the rocks with no cell phone or camera, my only memento of this rare silver king was a single scale plucked during the release. To my knowledge this was the first Texas tarpon of 2018 and the earliest in the year I have ever caught or heard of. I couldn’t help but believe it was a good omen.

I prepped for a three-day beach charter the following day. Though the surf was still raging I ended up getting several kids on big blacktips. Three were hooked and landed on that trip during a single afternoon while casting into the first gut. With an aggressive current and semi-dirty water, the sharks were in very close. Even so, the water temps were still below normal for the date. This became evident when one of the clients landed a very healthy 42-inch redfish. I returned home in anticipation of the week ahead which, luckily, had been forecasted to provide an extended period of calm conditions.

My plan was to give it a day's rest and then head back down the beach on a personal trip. I prayed that with possibly five or six days of calm conditions, something we hadn't seen in months, the fish would be hungry.

That night, instead of staying home to rest, I opted to head to the back bays and wade with the flounder gig. If nothing else, I could get a few stingrays for fresh shark bait. The floundering was slow but the rays were plentiful. Within a couple of hours I collected a half-dozen that averaged 25-pounds, the last of which created a great murky cloud around me. Throwing that one in the kayak, I continued on and, just a few feet away felt my foot sliding from under me – I had stepped on a large ray!

Almost instantly it stuck me in the calf. The ray thrashed violently for a second or two until the barb was forcefully pulled out. I was fairly confident that the barb did not break off in my leg, it did however pierce my waders and drove roughly 2-inches into my calf muscle. In a flash I hopped in the kayak and paddled furiously to the boat ramp, and then home.I cleaned the wound and soaked it in hot water to neutralize the pain. While my calf was swelling somewhat, the pain was semi-bearable.

The pain lessened the next day and I could apply some weight on it, even though some swelling remained. I decided to take some antibiotic meds and stay off of it for the day and rest. Thankfully, I have a strong immune system.

With healing in progress, the weather window we had been waiting for was almost upon us. So, the next morning, the truck loaded, Alexis and I hit the Padre surf for sharks. The surf was still kicking but the clarity was improving. We reached a promising location just before dark and hurried to get some baits in the water.

I rigged a whole ray obtained from the night I’d been stuck and deployed it. Getting back to the beach, that bait was picked up within five minutes. Shark on!

I knew instantly it was a bull shark. A 20-minute fight brought it to the beach, my first 8-foot bull of the year, and in very healthy condition. We made a hasty and successful release but we were unfortunately out of daylight, no time to deploy more baits for the evening.

We got an early start the next day and very shortly were into blacktips and bulls. It seemed as if the nicer the conditions became the more the blacktips would interfere with our fishing. We did however land a final bull of 7-feet 9-inches, which is still an impressive shark.

We kept baits out until dark and the wind began to pick up. All baits would get smashed within a couple hours but no hookups. We decided to call it a trip and head out a day early, given that the forecast had been revised to include strong wind for the next 24 hours. I decided to take a day off for rest with another 3-day weekend charter coming up.

As per pre-arrangement, I headed back down the beach half a day early to await the arrival of my clients. This gave me ample opportunity to find a good spot and even fish for myself for a few hours in what I knew were absolutely prime conditions.

Finding a stretch of promising water, I hurried to run out several large baits. I could almost sense the shark presence. An hour later I hooked and landed a 6-foot 10-inch bull. Not massive, but a good start. I had a couple of baits get picked and dropped. A couple hours later I hooked an even better fish. After a respectable battle I succeeded in tagging and releasing a fat bull that taped 7-feet 10-inches. Nice!

I decided to run one more big bait for the day and it was picked up within minutes. The bounce in the rod tip told me it was likely a blacktip or small bull. Little did I know the shark was just sitting there, eating the bait.

Suddenly the reel was screaming and I hopped up on the rack and strapped in. The shark acted rather strangely throughout the battle but I could tell it was big. I fought it to the first sandbar where it decided to make a powerful surge parallel with the beach. Another ten minutes of tug-of-war, I was finally able to hop down and go out and leader the shark. My first good look at it came as I was about to grab the leader. Two large dorsal fins… LEMON!

I applied the tail rope and got it leadered. A mature 9-foot male lemon. Large males of both bull and lemon species are extremely aggressive. This shark had a massive head and solid girth, neither of which were done justice by the photos. I got him tagged and released and on his way. Awesome!

After that fish, I decided to the leave the remaining baits still in good shape for the clients who were due shortly. The surf went almost calm as glass the remainder of the trip and the bite completely died, save for a few blacktips other small sharks.

As I write in mid-May and looking forward to June, each available weather window holds promise of excellent large shark action. And, barring any unforeseen weather patterns, it should continue right on into July.

Already this year, to the best of my knowledge, I have landed the first tarpon and first lemon shark in Texas. Hopefully, this is a sign of more great things to come. Knowing when and where to fish plays a critical role in taking advantage of weather windows. Personally, I am expecting great things for the next couple of months and foresee some large sharks being landed on my charters.