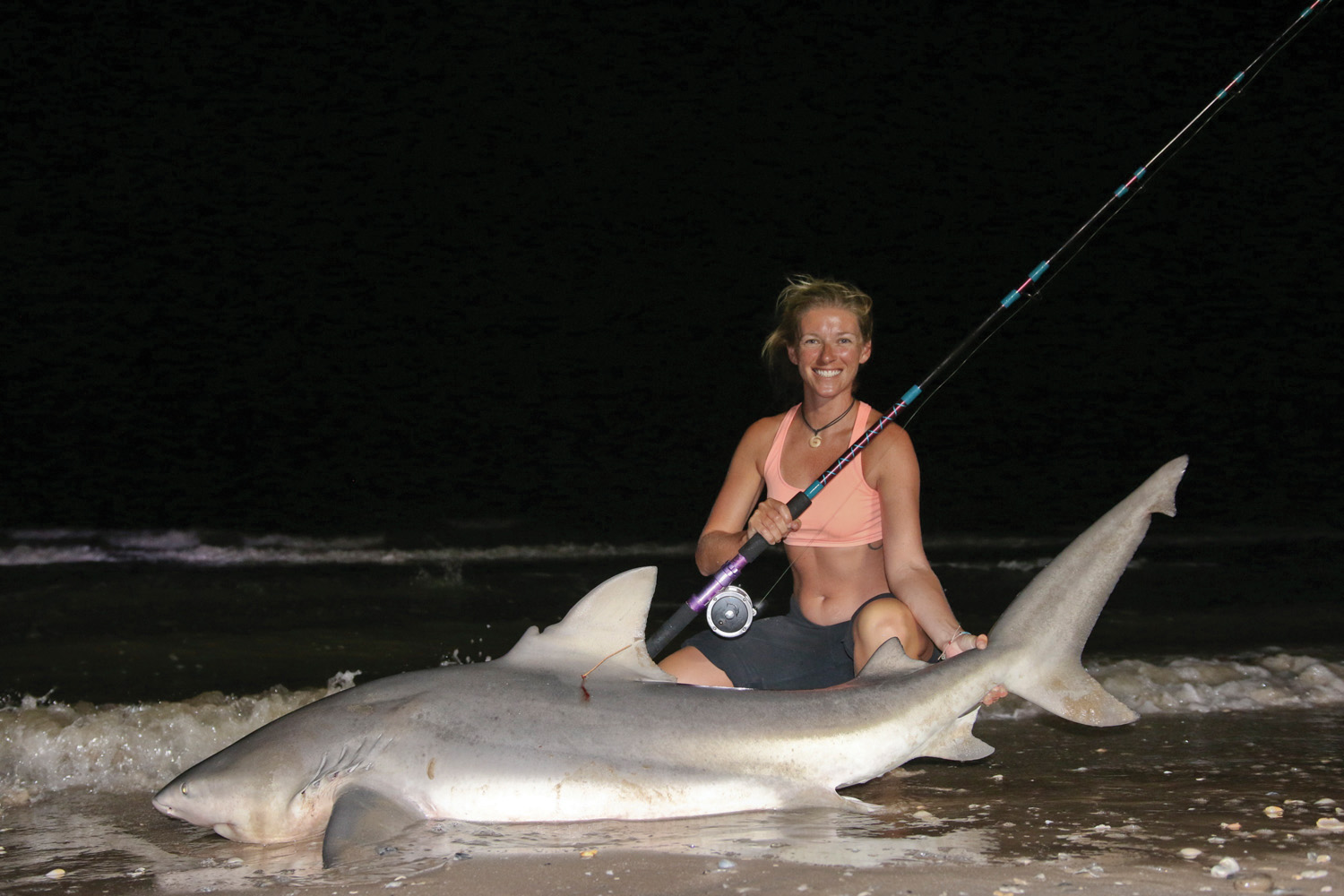 Alexis with a nighttime Matagorda bull shark – tagged and ready to be released.

The Texas coastline runs an incredible 367 miles. With that, the ecology and geological structure changes significantly from one area to another. The weather, too, varies widely along this long coastline.

As with many ranging ecosystems, certain regions of the coastline may contain a wide range of activity at any given time. While the bite may be slow in one location, another area of coastline 100-miles away may be enjoying incredible fishing. There are many variables in nature.

My usual stomping grounds lie along the coast of South Texas and the majority of my kayak and surf fishing effort is focused along Mustang and Padre Islands. To narrow it even further, the waters of Padre Island National Seashore are typically what I call home. The currents and slightly deeper water depths along with better water clarity make it very inviting. In all honesty, if not for these unique characteristics, I would not be living in Corpus Christi.

The problem at hand is that during certain months we encounter periods of rather slow shark opportunity along PINS. While the speckled trout bite may be rock solid and even opportunities at cruising tarpon might open up, targeting sharks can prove boresome. Blame it on the shrimpers – I guess.

Come late-July in South Texas, the Gulf shrimp season is in full swing and a great number of resident sharks are drawn to the smorgasbord of shrimp cull just a few miles offshore. Mature blacktips, greatly abundant much of the year, virtually disappear from the beach for nearly two months.

Another factor that might contribute to the shortage of sharks on PINS during this time frame are the mysterious upwellings of cold water on PINS. From the Port Mansfield jetty and sometimes extending nearly 30 miles to the north, we find temperature anomalies of 10- to 15-degrees. Not much is known about this phenomenon, whether it originates from deep offshore currents or exceptional freshwater runoff.

There are exceptions. Sharks of various species will follow shoals of dusky anchovies, however most of those don't make it up on the beach until September. And, despite being generally slow in the toothy category, this two-month period can sometimes provide our best shot at tiger sharks and, just occasionally, a great hammerhead might come along without the risk of pesky blacktips and smaller bulls shredding baits before the tigers and hammerheads can find them. So, on Padre, while the shark action is less than stellar, the fish you do get are most often very high-quality specimens.

When shark fishing gets slow in the south, I sometimes trek northward to beaches along High Island, Surfside and Matagorda Peninsula. Alexis and I decided on the Matagorda beach for this particular trip.

The largest species landed there is likely a summertime lemon shark, upwards of 8 or maybe 9-feet. No real monsters. Water clarity is often murky, not where you typically expect to find the larger species such as tigers and hammers. However, what it lacks in massive sizes it makes up in sheer numbers. If you want to catch a 4- to 5-footer there may not be a better place on that part of the coast.

Bait is generally plentiful along Matagorda, menhaden and mullet. And, while shrimpers are also active up there in late-summer, they tend to work much farther offshore than along PINS. So – murky or not – their surf zone teems with life and we yearned for adventure.

Matagorda it is a mosquito wonderland compared to our beaches and the terrain along the beach is vicious to say the least. To prove it we broke a leaf spring on my new Tundra. The beach is composed of hard-packed oyster shell and Pleistocene fossils, hence the gnarly driving. Alexis and I banged out a variety of shark species. As expected, no monsters, but plenty of action. The majority of the sharks were bulls in the 4- to 6-foot range, though we did get one around 7.5-feet. Out of about 25 shark baits kayaked out, at least 20 got hit and about half were landed. Our weather window ended up being shorter than expected so all our fishing really came within a 24-hour period.

The bait abundance was staggering, and all the reason the predators were there. Along with sharks we observed large schools of tarpon blasting mullet. While we did not hook any they were a beautiful sight to behold. At the time of our trip, reports from Sargent beach all the way up to High Island included shark landings and other game fish. Galveston anglers were checking with solid bull shark action.

All the while, that same weekend, Padre Island was reporting extremely slow fishing. It just goes to show that while action may be slow on one part of the coast, the surf zone can be going berserk on another part. Sharks will remain active on the upper coast through October and into November. Then, the oversized red drum will be storming the surf, so thick you can practically walk on them. Hopefully by that time the PINS surf will be teaming with sharks and we will not have to travel so far.

Meanwhile, with 367 miles of Texas beach to explore, the fish are bound to be somewhere!