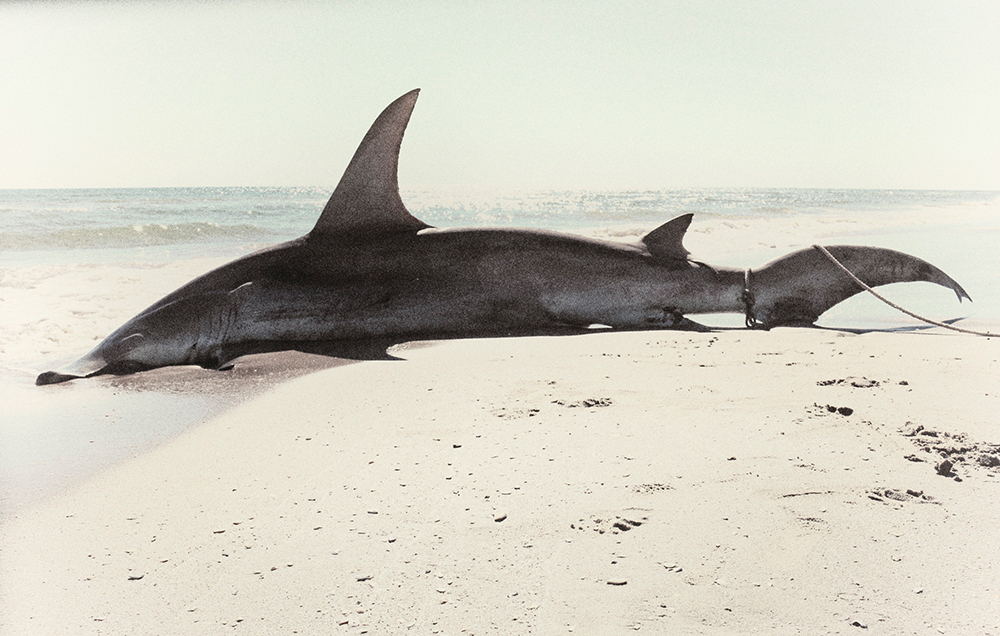 Vintage photo from the “golden era” of Texas shark fishing – great hammerhead on the beach.
Since the dawn of recreational saltwater fishing, sharks have occupied the minds of daring sportsmen. The majority of beach goers and anglers avoid these leathery monsters, but since the invention of the fishing reel, thrill seeking adventurers have craved close up encounters with them.  Like those who pioneered the sharking sport generations before me, I'm a part of this unique, misunderstood breed.

If I had a time machine, I'd enthusiastically travel back to the days when recreational shark fishing began, so I could see what the hardy pioneers went through to make their historic catches with the gear available to them. If we turn the hands on the imaginary clock back roughly 50 years to the golden era of shark fishing, we can visit a vintage shark camp temporarily constructed on the scalding sands of a Padre Island beach.

Instantly, we welcome one aspect of the scene; the pristine beach appears nearly free of trash. As we walk around the desolate, circa 1970 camp, we recognize a more primitive way of doing things. A makeshift enclosure fabricated from driftwood and canvas replaces our modern EZ-up style shades. An inspection of the heavy beach trucks outfitted with obtuse tires reveals one enduring similarity with the present day...profuse amounts of rust.

Aluminum platforms for placement on top of trucks had not yet been invented, so rods are anchored to the truck or in the ground by a variety of simplistic rod holders. Alongside the water lie a surf board and an inflatable tube, both used to deploy the massive shark baits. For fishing setups, the anglers in this camp employ large Penn Senator reels packed with Dacron fiber lines and heavy monofilament.

Glancing at the terminal tackle, the leaders are built on 3/32" or 1/8" bare steel cable, the giant 16/0 hooks fashioned in J-style. These heavy hooks combine with the stoutly constructed leaders to create an archaic feel. A few feet away from the leader, a section of fresh-cut, bloody tarpon flesh stands ready to serve as bait. It's odd to think of tarpon as legal for shark bait, but for our imaginary anglers it is quite effective.

As this machismo crew clumsily rows their baits out beyond the breakers, we come to appreciate the effective utility of modern sit-on-top kayaks. Finally, after what seems an eternity, the baits find their way to the bottom, about 400 yards from shore. Kicking back, our boys of summer relax in a stress-free setting, content in their own state of Zen.

Just as one of the sun-baked beach cowboys dozes off, the clicker of the 16/0 reel begins to scream like a banshee. Frantically, one of the younger guys straps on a homemade leather harness and clips it to the rig. The shark relentlessly smokes line off the reel. Another camper grabs hold of the angler as he digs his heels into the sand to prevent being launched into the surf. This scene of organized chaos is not this crew's first rodeo.

Both the shark and the angler eventually tire, and it's unclear who has the advantage. A grueling 45 minutes have passed and the shark runs back and forth in the first deep gut, less than 100 yards off the beach. A short time later, the quintessential hardcore anglers catch their first glance of the beast, their nemesis. The tall saber-shaped dorsal fin punches through the surface of the water like a German U-boat. Two guys ready an old nylon tail-rope and wait for a prime opportunity to secure the fish.

Still resilient, the shark resists coming in. Another ten minutes pass, and the shark starts swimming right in front of the camp, just outside the first sandbar. Out on the bar, the leadering crew chooses the precisely right time to grab the line with a pair of battle worn gloves. The shark thrashes violently, trying to escape, but its energy has been almost completely depleted. As the lasso closes around its tail, the men have their prize secured. They finally drag the dying shark onto the sand to confirm the catch.

Our victorious men of old have their trophy—a great hammerhead pushing 13 feet. Eventually, as was the custom of the time, these victorious sharkers will load the shark onto one of the trucks, haul it back to town, hang it for photos and a bragging session. A half-century ago, anglers commonly brought one or more sharks to the landmark Bob Hall Pier in Corpus Christi to hang for display, using winches or a front-end loader.

Crowds gathered and gasped; conservation of sharks was not part of their mindset.  People considered sharks dangerous threats, exemplified by the classic movie Jaws, filmed contemporaneously with our invented events. Generally, conservative practices to preserve species were not established or widely practiced for another decade or more. Shark populations stood at high levels, so even with primitive tackle, anglers subdued giants from time to time.

A historical perspective makes it easy to note the changes with the protocol and overall setting of beach sharking. In today's angling world, technology has altered the logistics and dynamics of sport fishing. This rings especially true in the competitive spectacle of shark fishing. Each year, advancements in the components and qualities of rods, reels and lines provide anglers a growing advantage over the fish.

The clunky, robust reels of yesteryear have given way to smaller, more dynamic units paired with stronger, thinner lines. Similar to the trend in the tuna fishing world, sharking gear continues to evolve and become lighter and more user friendly, thanks to superb engineering technology. Better gear, utilized correctly, leads to better results.

Today's gear is superior in terms of efficiency. Along with the advances in reels and various lines, I'm happy to be part of the terminal tackle aspect of the industry. The days of all-cable or 1200 lb. monofilament leaders are over. After making and field testing numerous leaders for many years, I've learned each rig pairs best with an optimal size and combination.

Since state laws require Texas anglers to use circle hooks, rigging methods have adapted to best suit their use. Like J-hooks, circle hooks come in giant sizes; placing a large circle hook at the end of a big chunk bait works well to catch a monster shark. Significantly, the circle hook is designed to lodge in the corner of the mouth to facilitate ease of removal. These changes contribute to the conservation of sharks; they reflect enlightened standards. With the current shark population levels standing at just a fraction of former values, anglers seek every edge they can get.

I'm fortunate to conduct shark fishing charters and have a line of shark fishing tackle which I constantly work to improve. Chartering throughout the year allows me to constantly test and design new innovations. My brand, Catch Sharks, combines the latest legal gear with my own personal modifications; all of it can be viewed at CatchSharks.com.

My hooks come covered with a patent-pending sand-colored coating, so they blend in with the sea floor. I've had plenty of encouraging success with them. My leaders have become streamlined; my current preference is 700 lb. ultra clear mono with my cable coated the color of sand for the drops. This phenomenal combination provides an incognito presentation. While the previous generation preferred 900 and 1200 lb. mono leaders, I find the 700 lb. much more efficient.  I land 90% of my big sharks on this size leader, including my recent 14-foot hammerhead, documented as one of the largest surf-caught sharks in the world.

I'm proud of my gear and wish I could travel back in time to the golden era of shark fishing to soak some baits with it, often wondering what kind of unfathomable beasts I'd encounter with my leaders and present day tackle! Who knows, for every single big shark landed 50 years ago, 20 bigger ones might have been swimming around waiting to pick up a bait. Without a working time machine, we'll never know for sure. The uncertainty provides part of the fun when dreaming of days long gone.