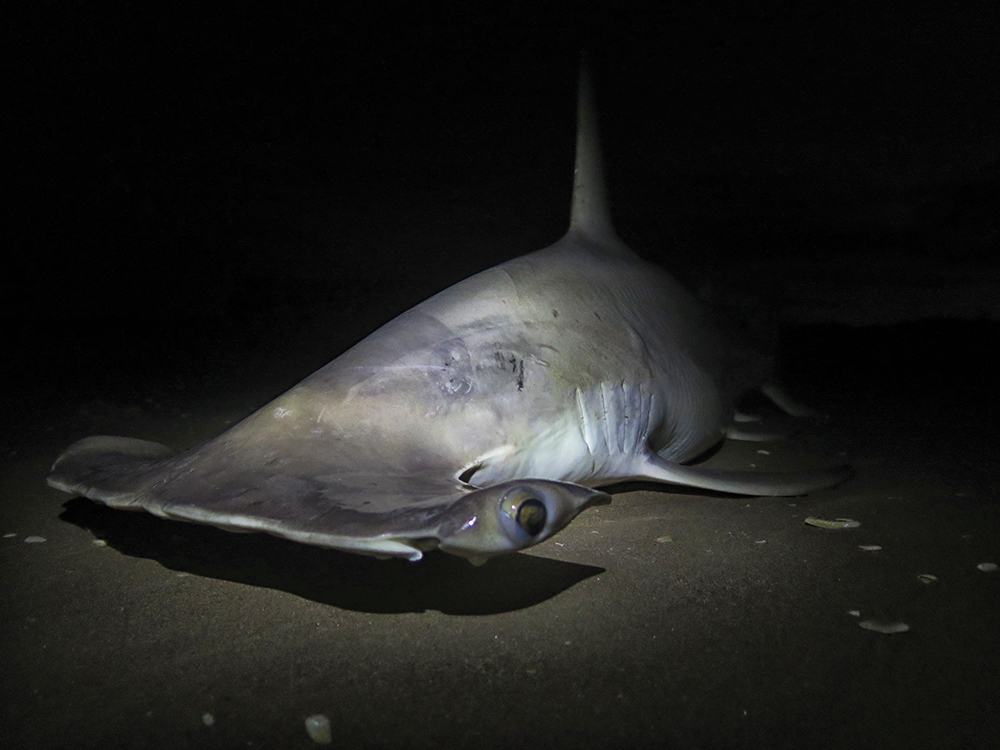 June ranks high among the most interesting months in the Texas surf. Vast numbers of blacktip sharks linger in the nearshore Coastal Bend waters before moving farther offshore in July, at the start of shrimping season. As we make the transition to early-summer, weather patterns and other factors greatly affect the water quality and all the creatures in the ecosystem, from the smallest prey species to the largest apex predators.

From the diminutive Atlantic sharpnose sharks to the massive, half-ton tigers, numerous toothy critters inhabit the surf during this time frame. People ask me why I don’t swim in the surf in South Texas. The reason is simple—when you wade into the water at Big Shell, you might become part of the food chain! With all the feeding predators around, summer brings a version of the Wild West to Texas saltwater fishing. I like to think of it as Jawrassic Park.

I do enjoy adventures up and down the entire coast, but the nutrient-rich currents off the 70+ miles of Padre Island National Seashore are my main stamping grounds. When June rolls around, I feel like a little kid in a candy store! This transitional time period provides the best shot at the “Top Four” shark species—lemons, bulls, great hammerheads and tigers.

Calmer, cleaner waters are more optimal for tigers and hammers. At the start of the summer, the wind patterns normally relax, clearing up the water to look like the Caribbean at times. The two gigantic, beastly sharks thrive in this pristine water, tending to hunt at night. Bulls and lemons, on the other hand, fare better in dirty water.

The long, semi-slender lemons have heads similar to large bulls. They have two dorsal fins of almost equal height and size, which help anglers distinguish them from most other species. While lemons are not super massive sharks, they can attain sizes up to about ten feet in length and weigh in excess of 400 pounds. In South Texas, this species appears mostly from late-April to mid-June, but on the Upper Coast, they stay from June through October.

The larger male lemons, full of testosterone, can be a handful to land on the beach. I've caught lemons on everything from jack crevalle to stingrays. My largest, measuring over ten feet, ate a whole skipjack close to the sand, in the second gut. Late in the afternoon, baits placed close to the beach often draw impressive takers. Because lemons are not common, they provide welcome variety any time we catch one.

Bull sharks excite us too. While we get a solid run of quality bulls in April and May, we see the largest individuals in June, when most mature females have recently pupped and hang around with ravenous appetites. This unique species will eat extremely large prey, including other sharks. We commonly reel in just the head of a hooked five-foot blacktip when the mega bulls are around.

Here in Texas, any bull shark over eight feet long is considered an outstanding catch. Typically, when bulls reach lengths of about seven feet, they attain more and more girth with each additional foot in length. Our benchmark trophy bull measured over nine feet long. I’ve only seen two of these—a 9’2” I landed last year and 9’3” my client landed a couple years prior. Bulls are among the most common sharks in Texas, with the blacktips; when they reach monstrous sizes, they create quite a buzz in the shark-fishing community.

Folks also revere the great hammerheads. Often called “greaters”, these hold the title as the largest of the hammerhead species. Texas produces some mammoth ones, probably because of the abundance of prey our waters support. Two of the greater’s primary food sources are stingrays and tarpon, both of which are plentiful in South Texas. Through the millennia, biological forces shaped the structure of the hammer-shaped heads of the species so they work efficiently like shovels, to pry stingrays off the bottom.

Great hammerheads have smaller mouths than some other sharks, so they often pick up smaller baits. Once they become hooked, they prove admirably capable of putting up a powerful battle. Among the fastest sharks, they fight about as hard as any species we hook from land. They've obliterated many reels over the decades.

Unfortunately, the attributes which make great hammerheads hard to land and handle also create peril for the fish itself. Members of this fragile species demand a speedy release. Any prolonged activity surrounding their handling may kill them, especially the largest ones, which expend most of their energy during the fight. Seeing a hammerhead in excess of twelve feet swim off after a successful release creates a life-long memory for any angler lucky enough to experience it.

Tiger sharks also stamp indelible memories into the minds of those of us who love fishing at the beach. Of all the sharks, tigers are my personal favorite. Everything about their appearance is mystical, from their dark eyes to their faint tiger stripes. These sharks will eat most anything, and are known as the trash cans of the sea. Anglers in Texas have found birds, turtles and other creatures in the stomachs of tigers, whose serrated teeth work like buzz saws.

Tigers can grow to lengths over thirteen feet, and they have appetites to match their size. Like the bulls, they'll eat other sharks. In June, they mostly feed after dark, targeting the massive southern and roughtail stingrays that come into the shallows to give birth to their young. While tigers readily take large jack crevalle deployed as baits, I’ve caught more of them on stingrays than anything else. Quite hardy, most can be released with no problems, as long as they aren't throat-hooked. Swimming a giant tiger out for release presents an uncanny interaction between man and beast.

June is an optimal month for targeting a variety of sharks. The first month of summer is undoubtedly my favorite one for big shark activity in South Texas. In addition to the sharks, other toothy creatures prowl through the waves, including both Spanish and king mackerel, and bluefish. All these species deploy razor sharp teeth in their hunting forays. Their snapping jaws fill the days and nights of all the baitfish with tangible fears.

The dangers lurking in the hot waters off the beach during summer don't end with teeth—the tentacles of various stinging jellyfish drift in the currents, and stingrays wield poisonous barbs like daggers. For these and other good reasons, the summer surf in South Texas seems like a treacherous place, but it's also where cautious, dedicated anglers pursue their dreams. Those fortunate enough to earn the privilege of landing a trophy shark fully appreciate the wild side of Jawrassic Park.