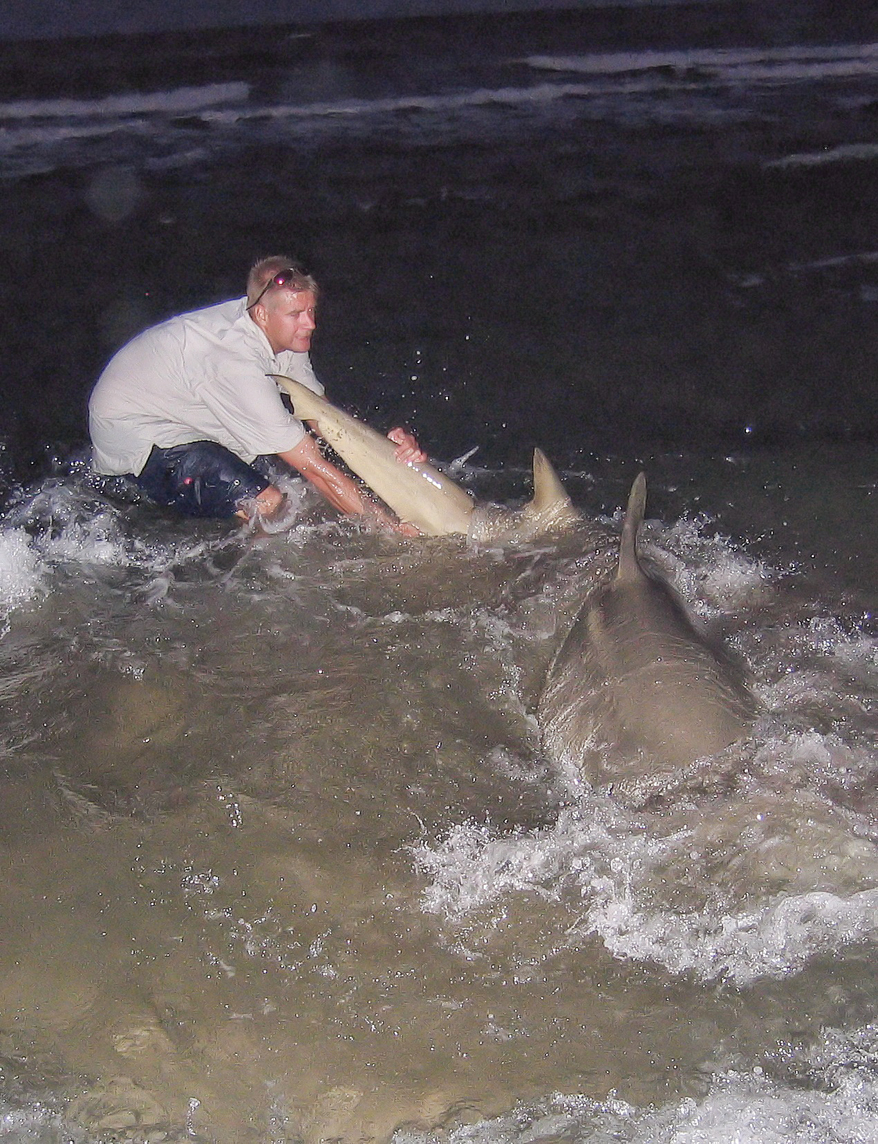 The author with a giant surf-caught lemon shark, tagged and released.
The arid beauty of the South Texas coastline lends a unique and majestic allure to its diverse fisheries. A rugged beach, hammered constantly by wind and waves, is on one hand a cruel place while serenely captivating on the other. Prevailing weather and currents do not lend to year-round clear water like that of the fabled Caribbean, neither do we enjoy the calmer seas found along Florida's gulf coast. Ours is harsher and murkier by comparison, and the gradient to the continental shelf far more gradual. Our water temperatures can range from very chilly 40s in winter to as high as 90s during summer's swelter. The winds typically blow with relentless power for months on end, broken only by the relatively brief calm of late summer. It always amazes me how the fish and wildlife of the region are able to adapt and thrive in such a climate.

Equally amazing to me is that even with the vast array of fish species in abundant numbers, I believe it safe to say that ours is largely a recovering fishery. During the golden age of Texas shark and tarpon fishing–the 1950s through the 1970s–the old-timers say there was no shortage of sharks or tarpon, and many of great size. Overfishing, commercial and recreational, took a huge toll. The magnitude of illegal slaughter for jaws and fins can only be surmised.

Then came the 1990s, a decade documented with some of the lowest shark and tarpon numbers on record. Recreational anglers noticed, and fisheries managers, too. Change was needed desperately but getting users to change their ways is never easy. Communication was the key and the explosion of the internet dovetailed perfectly to help spread the word. Suddenly message forums and chat rooms began filling with a new brand of conservation ethic. Fascinated with sharks since childhood, my original desires to become a shark fisherman were spawned by this movement and eventually led me to creating a website and forum of my own. With all of this positive influence over a decade, things finally began to change for the better.

Twenty years of conservation-minded fishing later, we see a remarkable and beneficial change. Tarpon numbers are some of the best we've seen in decades, and should only get better. Offshore, red snapper have become so concentrated at some locations it is hard for other species such as grouper to populate within the mix. Sharks, while slowly rebounding, still manage to be the unfortunate group due to careless illegal finning from foreign parties in our waters. Because of this we may never see shark populations as they once were back in the heyday of the sport. However, it is amazing to see the current shark fishery Florida has to offer. While Florida has illegal shark activity in their waters as well, they are hardly affected to the critical state of the matter that we are involved in. Their shallows are teaming with bull sharks, hammerheads, and hordes of lemon sharks. Of these sharks, the lemons are Texas's rarest species.

While the modern-day ratio of lemons among Texas shark landings is tiny, it was not always this way. Though seasonal, this species was very common in the 60s and 70s. During that time, a very large specimen was landed by Dale Whitehead at Indian Point Piera far piece from the gulf near the back of the Corpus Christi Bay system. Lemon sharks in decent numbers were also documented in the Intracoastal Waterway near Port Isabel. The Chandeleur Islands off Louisiana and Mississippi are known historically to be a pupping ground for lemon sharks.

Certainly not the most ferocious or physically menacing, the lemon shark is nonetheless a remarkable species. They are not as fast and aggressive as some of their cousins, yet lemons can be very determined. Visually, they are easily identified by the equally-sized second dorsal fin and the pale yellow-green color of their skin. Today, any lemon shark caught in Texas water is considered a trophy.

Over the past decade the average landings of lemon sharks from our beaches is about two or three per year. This could easily fluctuate to near double digits or down to zero as seen in some previous years. The month of May has traditionally been the most active period in which we encounter them. Much of the time they are caught on casted baits intended for blacktips. Perhaps the greatest difference between the two species is size. Lemons can exceed 10 feet in length and attain weights greater than 500 pounds. This fact alone may contribute to the low number of landings. The largest lemon shark I have landed taped out at 10'-1" and was pure mass. While a solid contender for a possible state record, I elected to tag and release it unharmed. Given the limited number of lemon sharks we see I cannot personally imagine wanting to kill one for bragging rights. To me, seeing one for the very first time here in Texas is as awe-inspiring as catching a large tiger shark or hammerhead.

Targeting lemon sharks from our beaches is fairly difficult, given their rarity. To be honest they are highly-regarded bycatch in most cases. I have caught lemons on large and small baits, amazingly close and also exhaustively far from the beach. Swimming in the shallows and the flats seems natural for the lemon shark, as is often verified on the southern portions of Florida's gulf coast. This is the only species of shark that I have caught in all three; Texas, Florida, and the Caribbean. Their range worldwide is remarkable when you look at it. Yet, interestingly, there has been little in regards to recaptures of lemon sharks that were tagged in Texas waters. We can only guess where they go–a long voyage around the gulf to Florida, do they stay off the mouth of the Mississippi River, maybe around the Chandeleurs? This is a question that has puzzled biologists for years.

Like the lemon shark, all sharks demand our greatest respect and conservation for future survival. It is up to us the anglers to continue paving the pathway toward sustainability in their ongoing recovery. Shark fishermen tend to be highly passionate about their sport, and passion escalates when the battleground is a strip of harshly carved and battered sand at the edge of the sea. The old-timey stereotype shark fisherman may have been a crusty and ruthless killer but, in contrast, today's sharkers are a brotherhood of stewards. We look after our targets and care about the fishery so that one day the sport will be shared with future generations. It is important to acknowledge today's recreational shark fishermen and how vastly responsible we are for the data obtained from sharks we tag and release. For some, it is a curious interest. For others, it is merely who we are and a way of life.