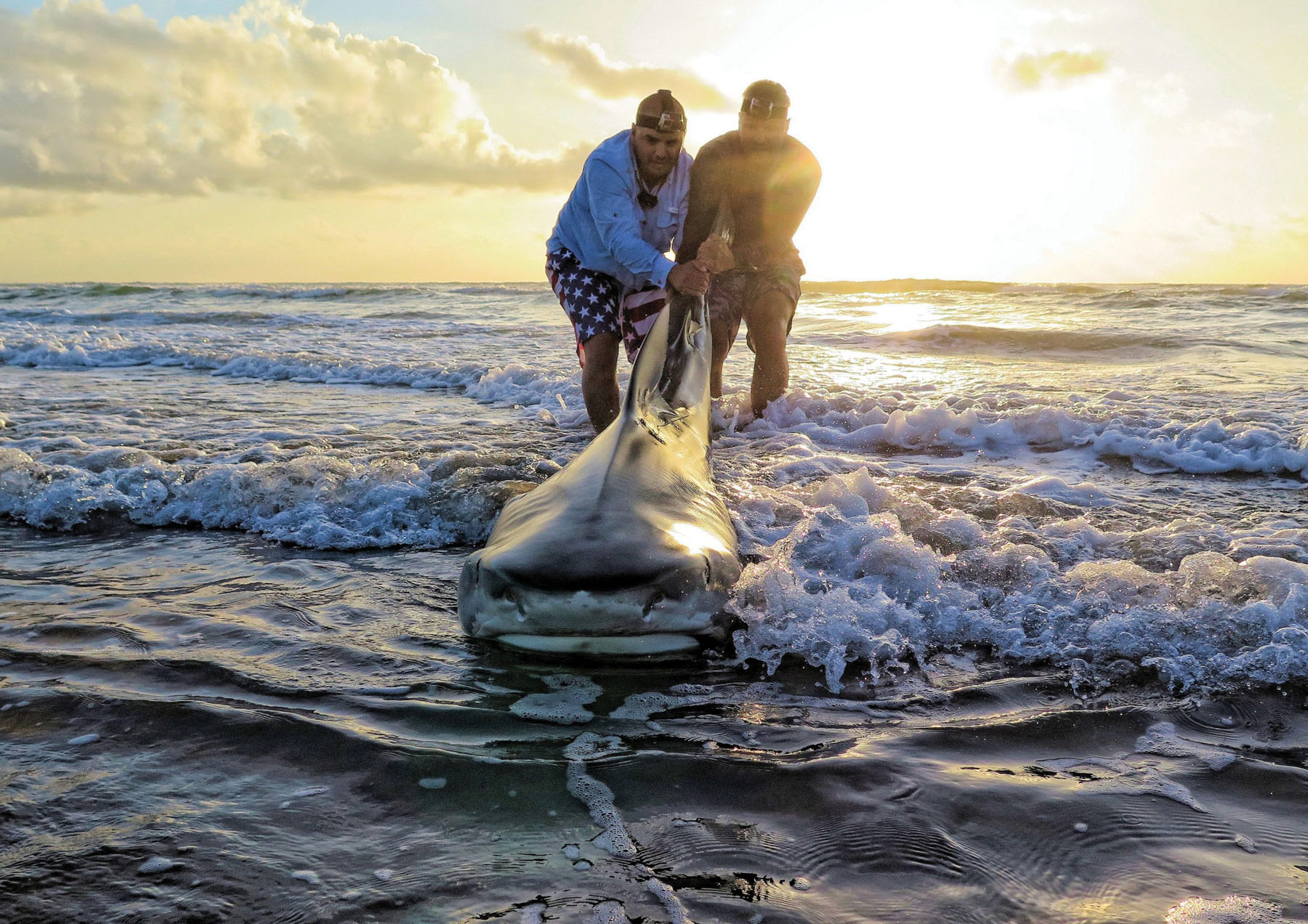 Oz and Noe dragging the tagged tiger back into the surf for release.
During my 35 years I have been fortunate to travel many places around the world in pursuit of adventure. I have seen wonderful things and met fascinating people of many walks of life. I have always worked hard to excel at pastimes and occupations that intrigue me, yet it is the aquatic realm that has had the greatest influence.

It began as a curious youngster glued to the television watching the movie Jaws and my interest in the marine world expanded greatly as I discovered saltwater fishing. When I first started my guiding business in 2013 I was sometimes challenged by friends and associates questioning my decision to make fishing my profession. Mainly, I was being told, "You probably will not enjoy your job–allowing others to catch YOUR fish." Truth be told, though, I get the same satisfaction putting eager folks on their first big shark as I do catching large sharks myself. Seeing the joy on the face of a 10-year-old landing a fish larger than they are is priceless.

I chose guiding for a reason. If you are good at something and enjoy doing it, why not do it every day of your life and make a living while you're at it? I have been shark fishing the surf for over 15 years and do it with great diligence and passion. I would like to consider myself remarkably good at it. In fact, while not sounding too cocky, I think I am one of the best current-day surf fishermen along the Texas coast. I am not basing this personal opinion on notable catches, tournament wins, television appearances, or other publicity. To me, being "good" has more to do with the sport–how you treat it, share it, and help reinvent and improve it.

Anyone can go out and get lucky and land a trophy fish. I've seen it many times, rookie sharkers landing an impressive fish for their very first shark. But in retrospect, there are many guys that have shark fished 20 years who haven't broken eight feet. Sometimes it is just luck of the draw. You see, to me, it is not about how many fancy reels you own or how elaborate your beach-shark vehicle might be. It is about the passion you possess and using hard-earned knowledge and creativity as tools for increasing success–and your willingness to share these.

When I first started shark fishing things were pretty basic. Throw some meat on a hook, toss it in the water and wait. At times the wait was painfully brutal, and all for nothing. While there were a lot of individuals in the same position as me at that time (beginner), there was no one to really teach beyond the basics. It eventually came down to experimentation and earned knowledge; the power of creativity will get you far in this sport. I started trying different methods and optimizing processes that yielded valuable results. Finding the happy medium between creativity and keeping it simple is ultimately the name of the shark fishing game. Some individuals work hard and learn quickly, others seem to lack desire to go beyond basics. I believe much of my success has come through careful study and learning to adapt to the constant changes in our marine ecosystem.

I believe that my type of fishing is quite possibly the most physically demanding of virtually any other offered by a guided fishing service. I know I won't be able to do this type of work forever but feel I have a solid 10-15 years or more ahead if my body holds up. I can only praise my predecessor, Capt. Billy Sandifer, who managed to do it so many years. He is the one individual in the world that knows how physically demanding shark fishing is and how tough it is to do it for a living. You must realize that unlike other guides (many are good friends), I am not standing in a boat directing clients where to cast, etc. My job entails me kayaking through dangerous surf, getting smashed up at times, just to get the baits out. Some days the surf may be relatively calm, but unfortunately that is not your average day on a South Texas beach. I willingly endure the danger, minor injuries and aches as simply part of the job of providing clients the best possible chance of a great catch and equally great experience.

My work does not go unnoticed or unrewarded. Recognizing the great effort required to put a successful surf-shark trip together, most clients are talking about rebooking even before the trip is over. There is a huge difference; a kayak guide paddling a couple of miles for a bay charter–try kayaking a similar distance just to get baits out, paddling into 20 knot wind, four foot breakers and raging current. That is sometimes what it takes.

I love what I do. If things are slow I will try to extend the trip to put a solid fish on the beach. Of course there are rare times when the fish simply aren't around or are not feeding, but historically I have a very good track record. My participation in shark research for various agencies always provides satisfaction for not just me, but the clients as well. Their tagged shark has potential to be recaptured, allowing them to receive data collected on "their" shark. Little factors like this add to the uniqueness of my charters.

I recently conducted a 3-day shark charter with a fantastic couple. I have been blessed to receive some very top-notch and friendly individuals. Kind of ironic considering the crusty lot many hobby shark fishermen can be. The conditions on this trip would hardly be considered encouraging; mostly muddy water and high surf. While things looked bleak, the fish were quite active. We finished up catching and releasing 11 sharks and losing a couple more at the leader. The highlight of this trip is that one of those sharks was a 10'-8" tiger, first-ever on one of my charters.

Noe is a very polite and respectable young man and fought this massive fish for well over two hours before wrestling it to the beach. The sense of accomplishment I felt personally and also for them was indescribable. This was actually one of the final sharks of the trip and, up to that point, Noe and Vanessa were already ecstatic with their catches. When Noe released this fish I did not know the human grin could stretch so wide. THIS is why I love my job!