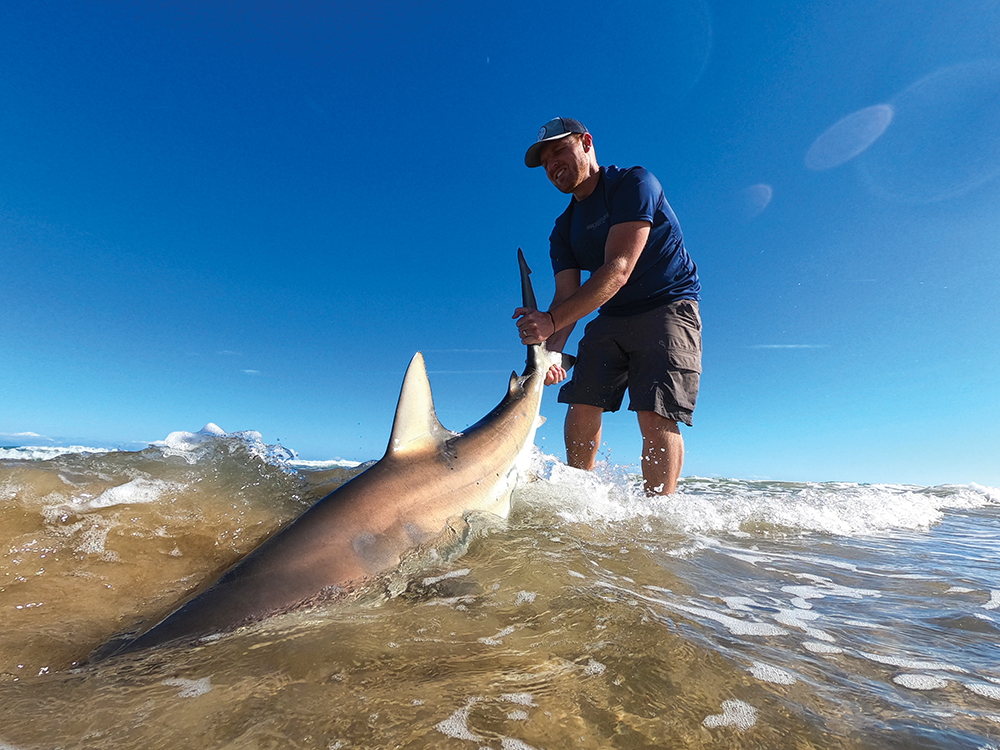 James Graff prepares for release of a great mid-winter blacktip.

Over the years, fishermen in Texas have learned to accept volatile weather patterns. We're fortunate to claim a coast where we can fish year-round. Through the sizzle of summer doldrums to the chill of arctic blasts, fishing opportunities remain viable at the edge of the Gulf all year. The entire surf zone, from High Island all the way down to South Padre Island, endures everything nature throws at it without becoming completely lifeless and unproductive.

The fishery does more than endure the changes; it also depends on them for its health. The most consistent aspect of Texas weather patterns is their undeniable inconsistency. The coldest season is no different, and we've seen some unusual, almost incredible things along our beaches during the topsy-turvy early part of this winter. Fortunately, the fishing gods have smiled on us recently, and created a winter wonderland!

The first strange and significant events occurred during the second week of November 2019, when an extremely early arctic blast pushed air temperatures down into the 30s in South Texas. In some of these areas, wind chills dropped to a frigid 20°! The freakishly frigid conditions stunned many inshore fish and other marine creatures. When this happened, many people predicted the winter of '19-'20 would be cold and harsh.

But the severe chill lasted just a few days, before more seasonal temperatures returned. Conditions a couple weeks later presented us with a spell of glorious fall weather we'd all been hoping for. The only negative result of the major November front was a lack of jackfish in the surf. Despite an especially  active spring, the fall jackfish run simply did not materialize in the Texas surf; it was by far the slowest fall jackfish bite I've ever experienced.

Fortunately, the jack crevalle were really the only unresponsive/absent species in the autumn surf.  The shortage of jackfish activity was offset by runs of several other species. Good conditions brought in massive numbers of fish. The rest of November warmed up to ironically 'consistent' patterns, and the water temperatures along the coast stayed stable and high for several weeks, concentrating the bait and predators along the beachfront.

As the calendar slid into December, the surf had become full of life. Mullet of all sizes, along with other readily available species of baitfish, cruised the shallows. The redfish, in particular the large oversized specimens, stormed the beaches and chased the bait. Not uncommon this time of year, the scenario was unusual because the copious amounts of bait kept the marauding reds so close to the beach, where they competed with bluefish and mackerel. Red drum have always been a staple for many winter surf anglers, and this season left many individuals smiling from ear to ear.

About the same time, Florida pompano came into the shallows of the surf with a vengeance. While pompano are a normal sight during most nice-day winter outings, to say this season has been exceptional for targeting the species would be a gross understatement. For weeks on end, anglers continually hooked numerous pompano on every outing. With this fish being so highly-prized for table fare in our area, this was a great treat for anglers. Ideal water temps associated with exceptional water clarity likely played huge parts in encouraging great numbers of these tasty fish to appear in the surf. I expect the pompano to stay thick along the beaches until March, as long as conditions remain relatively stable.

One of the biggest surprises for me so far this season was the large numbers of little tunny which showed up. Sometimes incorrectly called bonito, little tunny are actually small tuna, averaging five pounds or so, on average.  They feed exclusively on small baitfish and fry, both of which were abundant in the surf early this winter. On multiple occasions, until around the end of the year, these hydrodynamic torpedoes strategically raided the inshore waters and beaches.

Every few years, Texas surf anglers get a chance to witness these predators feeding within casting distance of the beach. All of the past occasions on which I've experienced the phenomenon occurred in the spring, so this was the first winter little tunny raid for me. Amazingly, this time the hungry tuna formed tactical schools and chased their prey over the first sandbar and into the shallows right on the beach, something I've never seen before.  The whole thing felt like a National Geographic documentary.

With the generous amounts of all sizes of baitfish around, the sharks would not be far behind. Alexis and I had a memorable overnight trip in December when we landed eight sharks on one evening, five being solid sandbar sharks. Sandbars are our most common winter shark species. They come in to feed on the pompano, whiting, and black drum. South Texas is a sandbar hotspot, as the region provides excellent mating and pupping habitat for this federally protected species.

While we have specimens of all sizes, a high percentage are mature brutes. When the sandbars come rolling through, they're usually in good numbers. During back-to-back December outings, I had bites on roughly 25 consecutive large, kayaked shark baits. The amount of hungry sharks was truly staggering, a welcome gift to sharking enthusiast like me!

Sandbar sharks weren't the only shark species invading the winter surf. In a rarely seen event, mature blacktip sharks made their presence known right before the arrival of the New Year. Most appeared to be large, pregnant females. The last time I recall seeing so many big members of this species so late in the year was back in 2002. I'd say the copious amounts of pompano, little tunny, whiting and other prey species set up a plentiful buffet, and the blacktips came to the beach to fatten up for Christmas once again. This gave me a chance to do some last-minute tagging for the Harte Research Institute, and I attached some specialized tags to a few requested blacktips. I  inserted “pop-up satellite archival tags” into three specimens, to aid scientific studies of the species.

As the days moved into 2020, our weather remained relatively stable, and folks along the entire Texas coast enjoyed mild temperatures. If this moderate pattern persists, many of the species present will linger in the surf. More likely, since Texas weather is so inconsistent and sporadic, we'll probably see changes before winter officially ends. Historically, in both January and February, we endure a few more shots of arctic air, so we might see some cold weather before spring settles in.

My customers have been quite pleased so far this winter, since we've been fortunate with the weather and blessed with productivity in our efforts. Personally, I really enjoy the wonders when winter offers a full plate like it has done recently. But I can't lie--I always look forward to the coming rites of spring!  My favorite season includes the invasion of scalloped hammerheads and behemoth bull sharks, also the chaos wrought by jack crevalle. Like every other season, spring promises a plentiful bounty to anglers. fishing along the beachfronts of Texas.