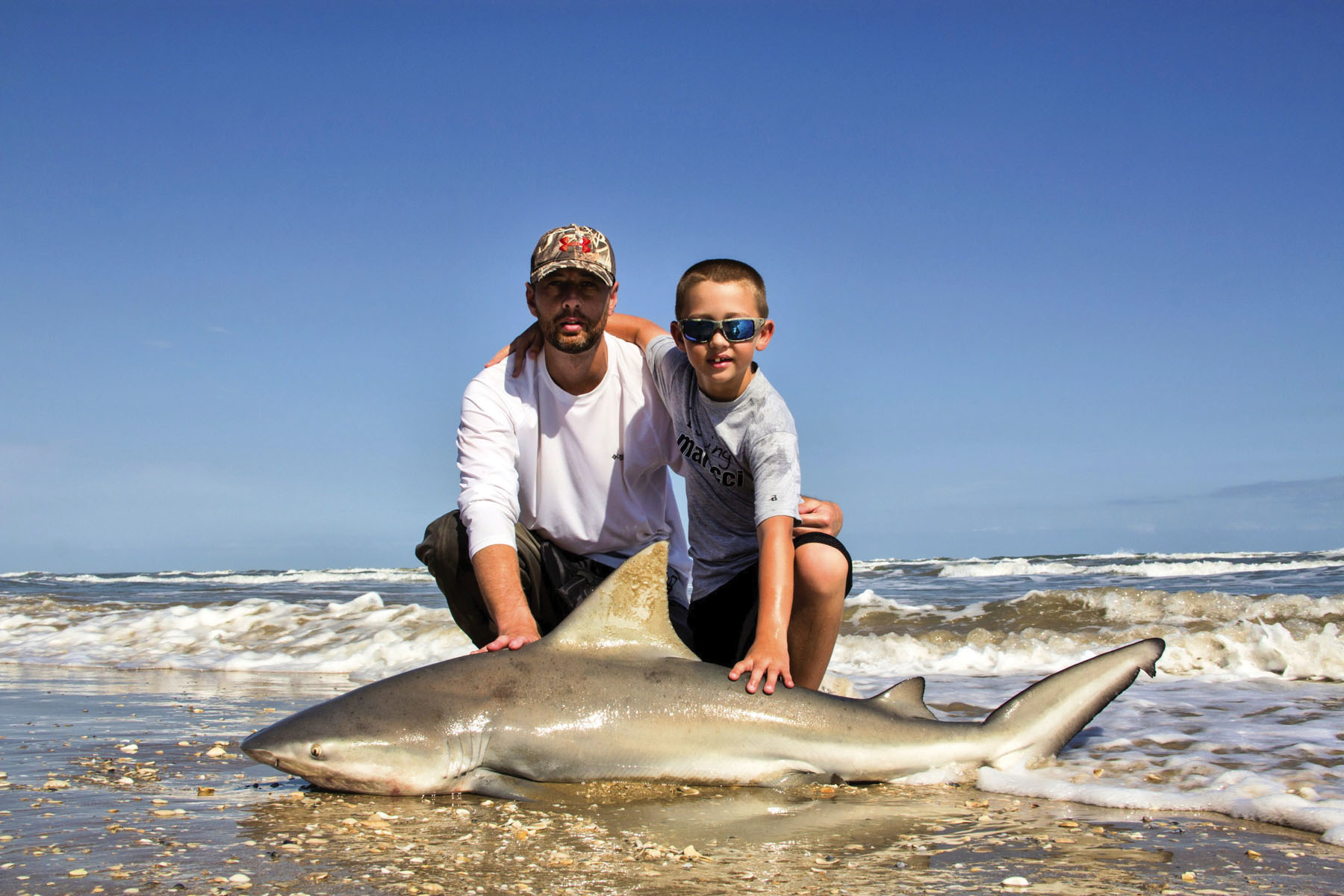 The spirit of youth renders an extremely captivating essence bringing back vividly my own early quests for adventure. In the eyes of a youngster, delightful surprises in the outdoors are as magical as they are real. Translated to angling, these are displayed with colorful enthusiasm and awe. Now an adult, seeing an excited kid triumphant with a superb catch, I am filled with same hypnotic awe they are experiencing.

The fall of 2013 has been a tough one for South Texas surf anglers. The budget fight and eventual shutdown of certain government services had the Padre Island National Seashore locked up. The few pristine days that came during the closure relegated anglers to fishing more populated pubic beaches. When the government opened back up I was finally able to continue with my surf/shark charters on the National Seashore beach. Ironically, by then, the beach conditions were generally poor with dirty water and copious sargassum. We kept at it, though. Mr. John Nicolau and his eight year old son, Reid, booked an overnight charter shortly after the closure was lifted and Reid would be my youngest angler since beginning my guiding service this past September.

Reid was a surprise to me, very reserved and respectful toward elders in his presence. When I learned he was already an accomplished baseball player with ambition to push his love for the game to fullest, I knew we were bound to be friends. In addition, it was rumored Reid was becoming quite the angler. At the tender age of eight his knowledge of the local fishery still amazes me. While it was evident Reid loves to fish, my only question was how would he fare down the beach?

It pleased me to learn they were not rookies, having already made several beach outings and fishing trips on their own. I just hoped I could entertain and excite them enough to provide a fun and enjoyable experience. I too was excited for this trip as we had many species available, including sharks, and my expectation of getting Reid on a good fish or two was running high.

Our adventure began with top-notch weather although the tides were running extremely high. Originally wanting to make a 40-50 mile journey to a stretch of beach where jack crevalle had been wreaking pure havoc, this would not be possible with tides pushing to the dunes. Restricted to the northern section of the PINS beach, we made the best of it and found a promising location and organized camp. A couple of John's buddies had also planned a beach trip, so they would be nearby to join in the fun. Our focus at this point became taking it easy and doing a variety of things.

I thawed several shark baits and kayaked them out. Meanwhile, we would put out some mullet rigs in hope of jacks and reds. It was not long until we were bombarded by gafftopsail catfish. With the crew bringing them in upwards of two at a time, I knew we had to do better.
Mid-morning brought our first shark action when a kayaked bait was picked up. Reid was atop the truck platform before I could even blink. This was HIS fish. His excitement reminded me of my own experiences a couple decades ago.

I recognized instantly that we had a shark and also that it was well-hooked. Carefully guiding the youngster, Reid settled in to do battle. This was a solid fish for any kid to fight by themselves, which was exactly how he wanted it. After a well-fought tug-of-war the dorsal fin appeared on top of the first sandbar and I got down to leader the fish while John took over the final coaching. Grabbing the leader I gently pulled the shark to edge of the water. In a matter of seconds Reid was beside me admiring the catch his first bull shark. Eyes the size of saucers and smiling widely, he stared in awe at the apex predator he had just conquered.

We worked quickly to tag and release the 5'3" bull with Reid eagerly assisting and memorizing the length and girth data for us. Not his first-ever shark landing, but by far his largest, and overall largest fish of his young career. He was still grinning long after the release.

But Reid was only getting started. After weeding through gafftop for a couple of hours he hooked another solid fish on one of the mullet rigs. Duking it out in his mini-waders, he was doing light-tackle battle, pounded by oncoming waves, all by his choice!

Completely unassisted, the way he prefers it, he conquered another beast. This time a bull red that taped thirty-nine inches and produced another all-day smile that radiated enthusiasm as he raced from rod to rod. The redfish action increased with approaching darkness and Reid banged out several more oversized fish.

By nightfall the young angler's adrenalin gave out and he was soon out like a light, nestled in his cozy tent cot . The next morning brought windy conditions, yet the water color had cleared slightly. I ran a couple baits out early but the wind had generated a current that brought enough sargassum weed to all but ruin our shark fishing. Undaunted, and after dozens more gafftop, Reid succeeded in hooking another solid fish. Before we could reach him he had a three foot blacknose shark on the sand; one of the least common species we encounter. Yet another very cool catch!

Another successful tag and release marked Reid's second shark for the trip. As conditions continued to deteriorate and we brought in the shark gear the reds began to bite. Reid succeeded in landing several more bulls before all was said and done.

After much "fill of the thrill" camaraderie, the crew which now included several other great individuals, slowly packed up and made our way off the beach. We were content in the fact that we were able to hit a brief but perfect window, which as I said earlier, has been quite rare this entire season.

Peering in the rear-view mirror, Reid was passed out cold in the backseat with a smile still glued to his face. To me, this was a very successful trip. Any trip when you can keep a person, whether 8 or 88 smiling the whole time, you know you've won. I have to give John credit for raising such a fine young man and firmly believe one day his ability and commitment to baseball could very well land him in the major leagues. After many more great fishing adventures, of course!