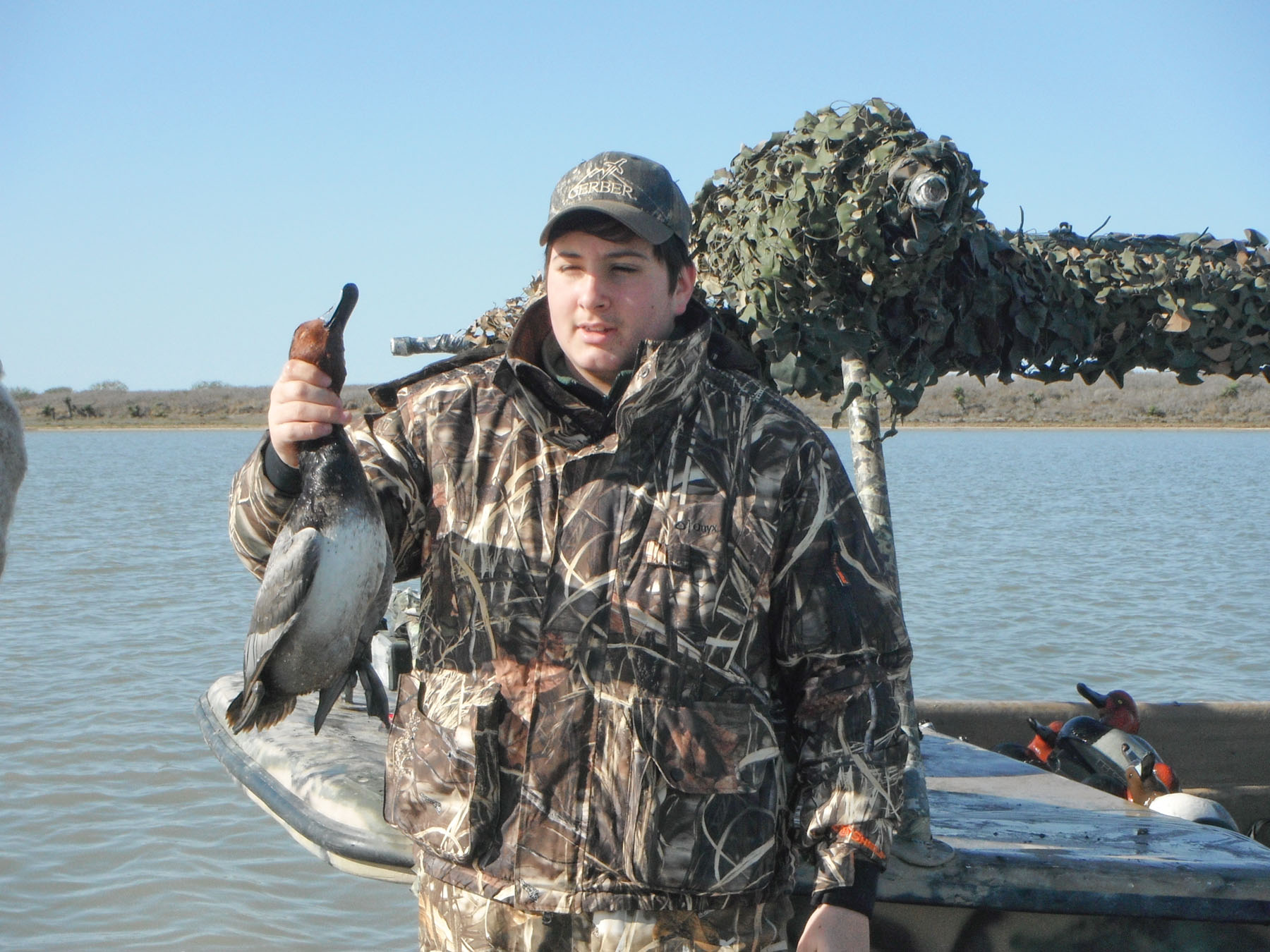 My past month was pretty eventful. I went duck hunting with my dad's friend, Dean, and his son, Austin. I also went fishing with my Uncle Joe who just got into fishing within the last few years.

At the beginning of the month, Dean and Austin drove down from Katy, to come duck hunting with my dad and me. We went out two days and hunted in both the morning and evening. Our mornings didn't go as planned, so we had to hunt in the evening to make up for what we missed in the mornings. We headed out to the same island that we hunted on when I went with my dad the last time which was with Julian's group.

With the cold front that had just come in from the north, we had lost close to two feet of water in the bay. When we set up the decoys, we had to walk at least 30 yards from the bank to get in deep enough water to have the decoys not sitting on the bottom. We sat up on the bank waiting for the redheads to come in. Our hunt was typical; we were done within an hour of setting up our decoys. We cleaned up our area and headed for home once we had finished our day. Dean and Austin had a great time on their first duck hunt in Port Mansfield.

Now to talk about my fishing trip with my uncle, for my uncles friends who think that he cant fish, he out fished me on this trip. We woke up at 5:30 and got our gear on and loaded the rods in the truck. We got to the boat slip, put gas in the boat, and we were off into the dark sky over the bay.

We headed south to our first spot because we had gotten good reports of certain spots down that way. We hopped off of the boat into water that was in the 60s and about mid-calf in depth. We walked out and started throwing topwaters. My uncle was the first to land a trout and it was a solid one at that. We waded a few hundred yards without catching another keeper on top. We all switched to plastics and we started to catch fish. We walked another two hundred yards and the bite had stopped. We weren't even catching small trout anymore. We left the first spot with four keepers. The score so far: my uncle Joe: 1, my dad: 3, me: 0.

We pulled into our next spot, which was packed, and stopped next to my dads friend Capt. Chad Kinney. Chad had put out his client and we jumped into the water. We were catching small fish quite often and my dad and my uncle were catching keeper trout. I was wading next to Chad and every time that I would lose a fish close up, he would cast right where I lost it and try to steal my fish. And then my dad went back to the boat and turned on the radio. My dad put on the local Tejano station because he likes to be funny like that. I looked at my dad and he was dancing weird and then I turned to Chad and so was he. Its always like this when I'm around my dad and Chad for a while. Together, my dad and Chad do some crazy things but I will talk about this at a later time.

My dad wanted to catch some bigger trout so went back to the first spot because that is where the bigger fish had been the day before. We got back out and waded for a while. Finally, I get a hit and set the hook. I land the trout and its one of the smallest trout of the day. That was the only fish on that wade so we went back to the second spot. Again, we started getting more hits and more fish immediately. I was still catching small trout and soon I wasn't catching anything. We were going to head in at noon, it was already 11:30, and I still had one more lure to try out. I switched to that lure and on the first cast, I hooked up. I landed a solid trout and another three after that. We caught our limit, took some pictures and headed in to get something to eat. That was my month and it was excellent.