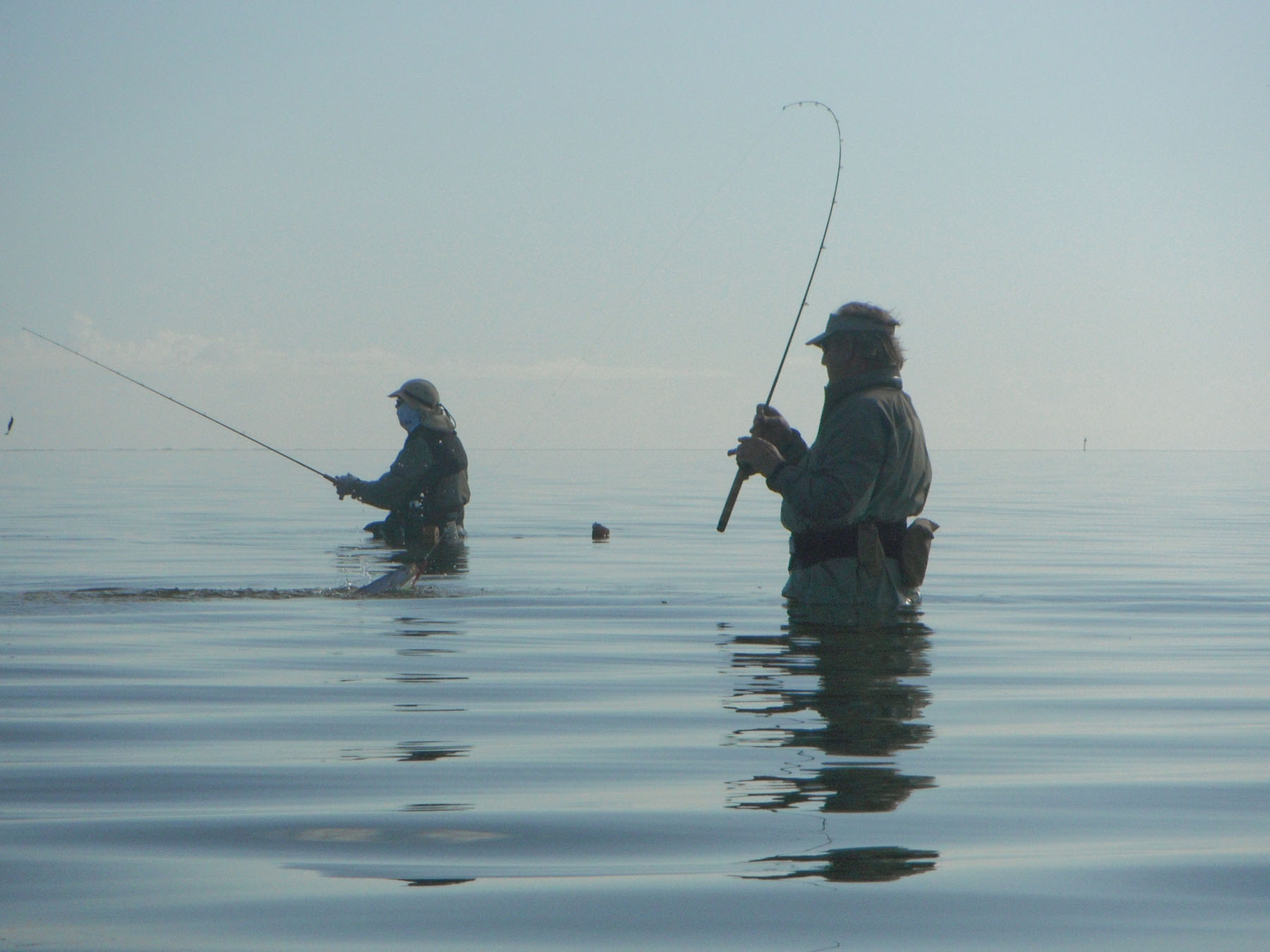 Cold and almost spooky calm, our day didn’t start with a bang, but it ended well.
It was a brisk Saturday morning. The cool air stung my lungs and made me shiver as I put on my waders. I loaded up my rod, wading belt, and tackle bag in my truck and headed towards the Mansfield Club. I was meeting one of my dad's good clients this Saturday morning for half a day of fishing. Mr. Pogue was leaving that afternoon and he invited me to fish with him and Kevin. As soon as I got there they were ready to leave. I hopped onto Mr. Pogue's 21' Hayne and we took off for the mouth of the harbor.

The boat ride was a quick trip up north. The sun was starting to come on strong and lit up the bay. We bailed and immediately we felt the arctic chill in the water through our waders. Myself more than the others because my waders were leaking for some odd reason. The wind was light and came from the southeast.

We walked slow, casting every which way to improve our chances of catching a fish. The day before, Mr. Pogue's group and my dad had done really well around the area that we were fishing. We were hoping for the same result. In the beginning there wasn't much action. We walked slow and in line. I was up next to the shoreline and I casted towards it every once in a while to see if there were any bigger fish up shallow. To our surprise, we did not hook up onto anything big and we were in a spot, notorious for big trout in the winter.

After walking about 75 to 100 yards, I turned around and started to fish into the wind. I had seen quite a bit of bait jumping and decided to give it a try. I walked slowly, without any luck. I changed my lure and after a few casts, I finally hooked up. It wasn't a big fish by any means, it wasn't even a keeper, but a caught fish is a caught fish. I walked down a little bit longer and failed to find another fish. I turned back and started fishing in the original direction.

While I was fishing in the opposite direction, Mr. Pogue and Kevin kept on going straight ahead. Not long after I had started walking the other way, they started to catch a few fish here and there. I had almost caught back up to Mr. Pogue when he turns to me and waves his visor at me. This was our signal for "there are fish up here." I stopped walking slow and I did a half jog the rest of the way to them.

I settled in right between Mr. Pogue and Kevin. I switched back to using Kelley Wigglers and I was now in the zone. We all casted out, we worked our lures and neither one of us hooked up. It was a slow bite and we were working the lures just off of the bottom. Some of them would hit like a freight train and others would just feel like grass. We weren't catching them right after each other either. I would catch one after every four or five casts maybe and that was about it, but we were still catching fish.

We caught fish for probably an hour and a half and then the wind died. If you've ever fished in Port Mansfield, you know that when it is too calm, the fish are spooked real easily. The fishing got slower and we stood there still casting and trying to catch a few more.

Then Mr. Pogue pulled out his secret weapon. He got the bottle of "secret stuff" and put it on our lures. Right then the wind picked back up and we had a small frenzy on our hands. We were catching fish left and right. The fish were gradually getting bigger and they were hitting the bait a little harder. We had a few double hook ups, and one triple hook up. We were in the right spot. The fish were hitting as soon as the lure hit the water.

Mr. Pogue hooked up again and said "Come out with your hands up!"