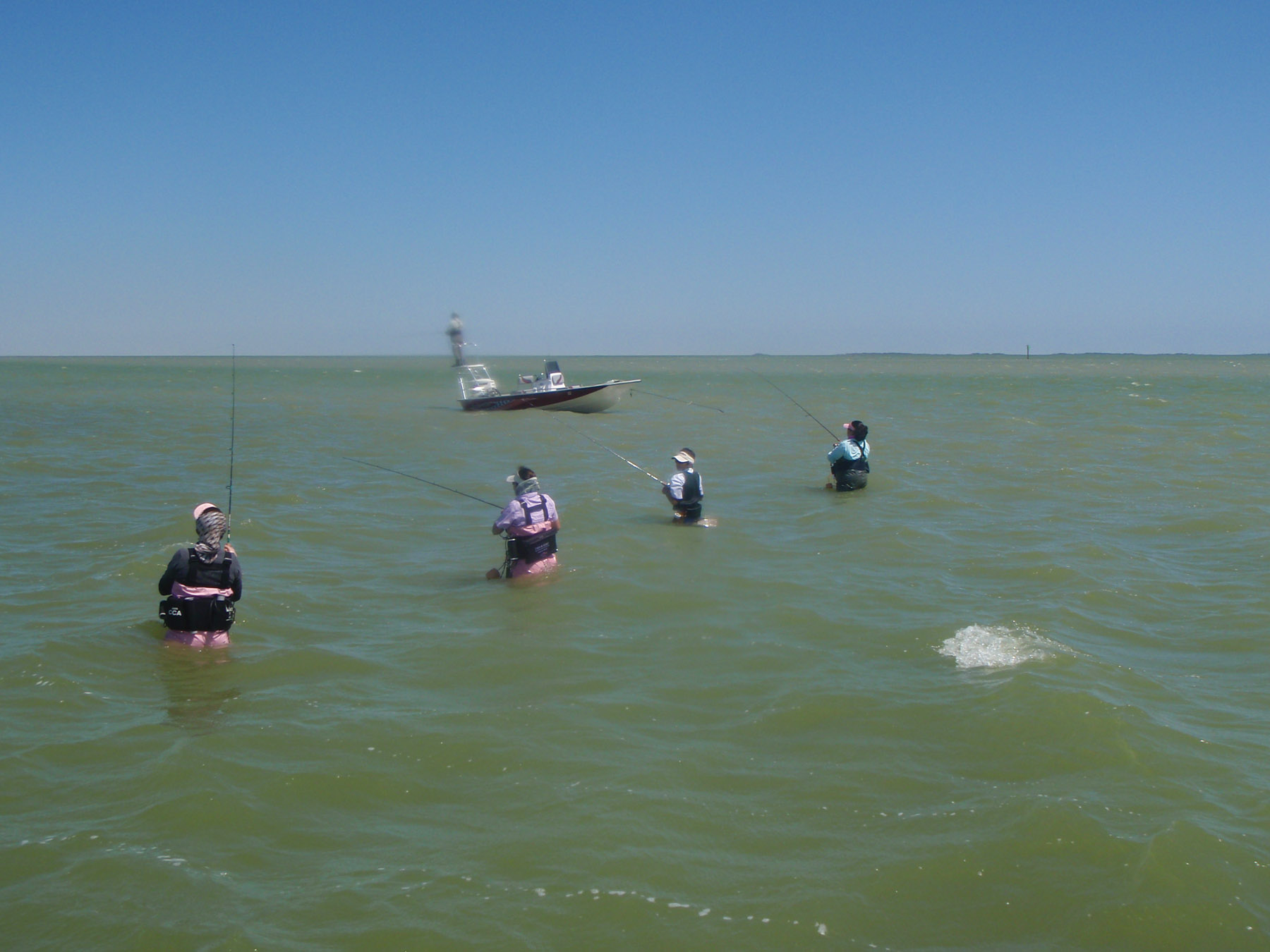 Jenny Fisher, Sandra Garza, then me and Erica Carpio. These are some excellent fisherwomen.

Don't know about you "guys" but I think we are lucky to know women that like to fish. However, with the women I know, it is a competition to see who can catch the most fish and/or biggest fish. Most of the time, these women are "lucky" enough to win when we go out fishing with them; and with this win comes bragging rights. I have fished with enough women to know how competitive they can be. I know that my mom uses her bragging rights all the time, and still reminds my dad of times that she kicked his butt in fishing. This article is dedicated to those women that brave the outdoors with us to come whoop our butts in the one thing that we love so much.

This month, I had the privilege to go offshore fishing on Capt. Shuler's boat with a group of young fisherwomen on vacation. This group had stayed at Getaway back in February and one of the girls landed a personal best trout of about 29 inches wading and throwing topwaters. That last sentence was just to tell you that these women that I was on the boat with were pretty serious about their fishing. So anyways, we headed out in the morning to our snapper spot to start the day. Our plan was to get our limit of snapper and soon after head closer to the beachfront and look for tarpon and kingfish. We arrived at our snapper spot at around 7:30 because of the wind chop that added to the 2-3 foot swells we were already going against. Brittney and Jennifer dropped their baits into the water as we drifted over rock piles, waiting for the right time to set the hook on a good sized red snapper. Our goal was to be done snapper fishing and be by the beachfront by nine o'clock.

It took all of about 10 minutes to get the first keeper sized red snapper in the boat and it went from there. Well since I was the one person designated to take all of the fish off the hooks, the girls were giving me a hard time about not being able to hold on to the fish. When a girl gives you advice on handling fish, it kind of hurts your pride a little, but seeing as how it was all in good fun, it was just something for all of us to laugh at. Our snapper fishing did not last long for we had reached our goal of having our limit of red snapper by nine o'clock. Our ride back towards the jetties was a long one because the girls were feeling a little sea sick. These girls were tough and even though they felt sick, decided to stay out and fish until they couldn't handle it any longer.

Now began our hunt for kingfish in our usual spot. We drifted through it many times, only able to get two kings to blow up on our Bomber topwaters. Getting to the kings was tough, so we finally decided to troll around for them while also looking for tarpon. We trolled a good while, then suddenly, one of the girl's reels started to spit out line and screech. We had hooked onto a nice king. This was Jennifer's first king ever and we had every intention of getting it to the boat, even if that meant following it. We were lucky enough that it was not too big and we did not have to follow it around. We got the king in and Jennifer was so tired it wasn't even funny. After I had unhooked the king, she got to take a picture with her first king and soon after was back to fishing.

Our day ended short because the girls were starting to feel worse, and chose to head into the harbor. We had landed around eight kingfish, and had limited out on snapper before noon. That's not too bad of a day with the conditions out in the gulf and the girls feeling sick. The girls will be back soon for a cast and blast. That should make for another excellent article don't you think?