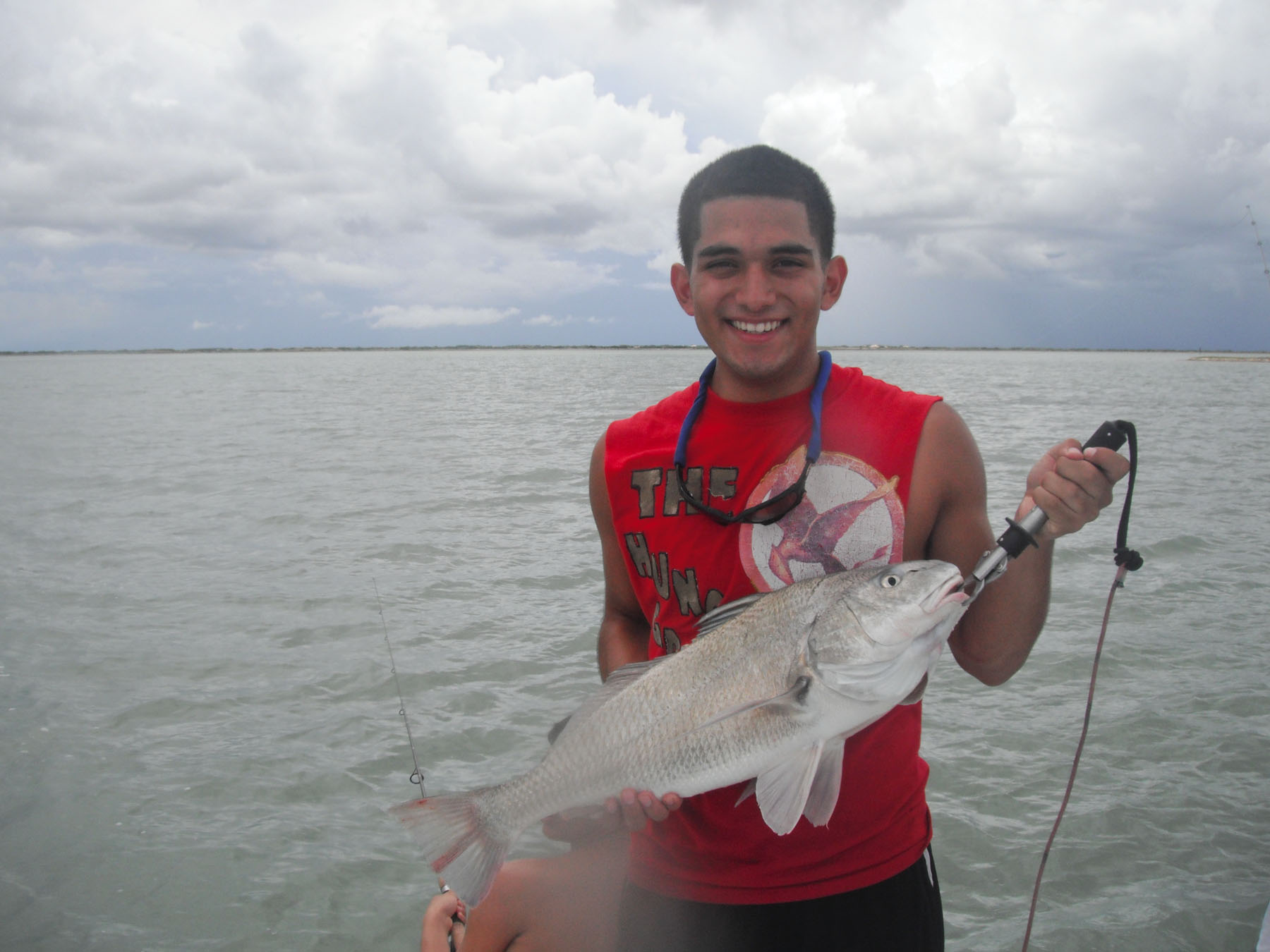 This past month my dad and I took my friends who have never wade fished before, for a day of fun on the bay. Marce and Robert weren't used to working artificial lures. Before this trip, Marce had never caught a fish in his life.

We woke up around six o'clock and we were ready to leave the dock at about 6:45. We headed out into a beautiful day on the water. The wind was light and the cloud cover was just right. It was the perfect day to teach them how to work a topwater on the flats. This would prove to be the most dangerous weapon of the morning, as usual.

Our day started off by selecting teams. Marce and I were competing against Robert and my brother Daniel. Our goal was simple, catch more fish than the other team. We were all set up with topwaters, and we were all in the same area so that nothing would be unfair. The first 30 minutes was slow. We had got a few blow ups while I was teaching Marce how to work his topwater. Then things picked up. We started to get more and more blow ups after walking for a while. Then the unthinkable happened, Daniel caught a fish before I did. I say that it's unthinkable because if you knew my brother, you would know that he doesn't really fish that hard. Anyways, Daniel and Robert were on the board. After about 10 to 15 minutes Robert hooks up on a fish. Robert got the fish to him and gets all excited about it. He pulls up about an 18 inch trout and immediately starts rubbing it in our faces.
Marce and I hadn't caught a single thing, but Daniel and Robert are catching fish like it's nothing. After a while, the score was 7-0 and Marce and I were getting skunked.

The next area we went to was a different story though. As soon as we got off of the boat in the next spot I was already getting blow ups. This was our chance to catch up or even take the lead from Daniel and Robert. After about 30 minutes, I had taken the lead by myself and had even strung a decent trout. The score was like 14-7 and finally, Marce had caught his first fish ever! To top it all off, he was using a topwater. Marce then started to catch a few and then we decided to call it quits on our little competition. After that, things slowed down for a while so we decided to move to another spot.

While on the way, my dad and I had spotted a large school of black drum. We decided to take a chance and chase them down. My dad turned the boat around and we headed straight for them. While my dad was driving, I was putting gulp on jig heads so that when we shut down we would be ready. The guys got lined up and casted out into the muddy water. Marce was the first to hook up. He fought the fish for about 5 minutes and then he lost it. Marce then threw back out to try and hook another one. Then Robert hooked up and his fish put up a good fight. He got it to the boat and I netted it. We thought it was going to be an oversized drum so we measured it, saw that it was at about 28-1/2 inches, took a few pics, and put him in the Yeti. This was just the beginning of what was going to be their best fishing trip so far.

We turned back around and hit them again. Robert hooked up again and we put another drum in the box. Robert caught a third drum and then I decided to join in. It wasn't too long before I was hooked up and then I handed the rod to Marce. He landed him and it was a decent sized drum, plus it was Marce's first ever. Then things picked up, Marce caught five drum in a row, he was excited that he had caught so many fish. Daniel caught two real quick and my mom, being the fisherwoman that she is, caught three drum on three casts.

We came in with one red, four trout, and three limits of drum. Not bad for their first fishing trip, huh? The guys had a blast and now they are hooked on using topwaters. I was proud to help them get hooked on artificials. I hope you all enjoyed this story and good luck to you all. Be safe out on the water and most importantly, have fun.