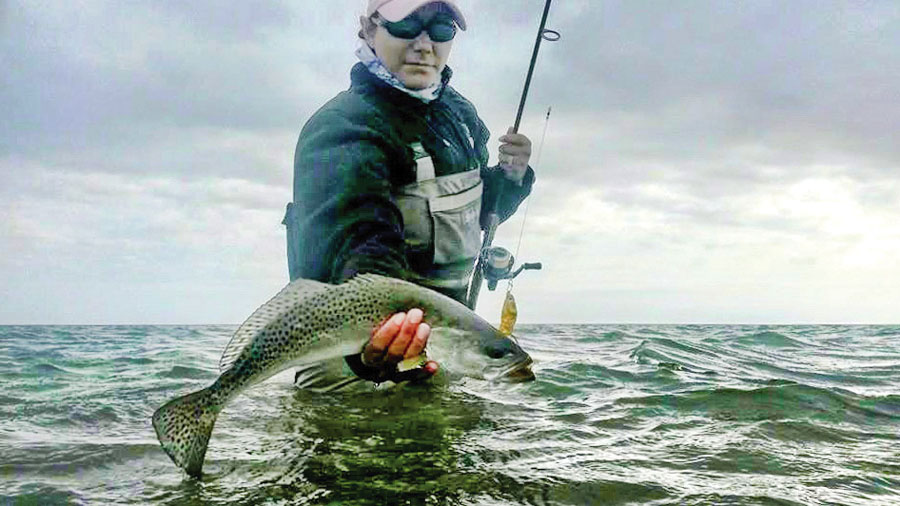 My mom, Sandra Garza, with one of the trout taken on a Stoker.
My dad, mom and I were at the dock at around 6:30am to meet up with Capt. Dean "Slowride" Thomas, Jennifer Thomas, Henry Stokes and Blanca. Henry owns Skinny Water Arsenal and wanted to look for big trout the next two days. We all caught up at the dock while we loaded up gear and fueled up. We were in for a long day of fishing, looking for big trout is some hard work. We left the harbor and headed for the first area. It was quite a windy morning and not like the predictions at all.

The boat ride wasn't too long. We got off and I immediately waded towards the intracoastal. I had fished this area many times with my dad and with Capt. Shuler so I knew how to work it pretty well. I got on the edge and started throwing topwater toward the drop-off. Dean was right behind me and behind him, Jennifer.

It seemed like it was automatic, everybody was getting hits, and then I hooked up. It wasn't a big trout by any means, but it was a fish. I got it off the hook, released it, and looked to my right. My dad was hooked up. There seemed to be plenty of fish in the area.

I kept getting blowups and then I would catch a fish and then another fish. Dean switched to top but everybody else stayed with the Stoker. My dad wanted me to keep some fish for trout rolls and so I strung three. Blanca was working a twitch tail Stoker on top and had a decent trout. Towards the end, Dean had a big trout swirl at his topwater. He tried to get it to hit again but the fish was uninterested. Dean said, "I had my chance to be a hero today" and I agreed. I was next to him when it swirled at his lure, it was a monster trout. We soon moved to the next area because it had gone dead and the wind was picking up.

We went for a short boat ride and got out into shallow water. It had become too windy for a topwater so I switched to a Stoker. At first I was using a slow sinker with a twitch tail but everybody else was using a weighted shrimp pattern so I switched to that instead. I was immediately amazed with this new lure. I loved it. I didn't catch anything in the area but I did have a few hits. My mom caught a nice trout on the shrimp pattern and my dad took some nice pictures and then let it go. Right as we were about to leave, Henry hooked up and also caught a decent trout on a Stoker.

We picked up and left to another spot. It was a small area and my dad decided to sit on the boat this wade. I was one of the first ones off and I was still using the shrimp pattern. After walking about 15 yards, my mom hooked up and then so did I.

My dad had placed Dean on the Intracoastal and after a few steps, Dean found some holes. I caught a few more fish there and then my dad decided that we should pick up and move again. The boat ride was a little longer than the other ones. We started looking for reds in the real shallow, clear water.

My dad and I have caught many reds back here and we were trying to do the same thing today. We got off and really spread out this time. I went far to the left and started fan casting. Dean and Jennifer went far to the right and everybody else was in the middle. The reds were scattered and shy.

I was still using the shrimp pattern and it worked quite well. After about 30 minutes, I hooked up onto a good red. At first I thought it was a big trout because of the way it came out of the water but when I got it up to me, I saw that it was a red. I had another hit and then it was dead. I was at the boat and then Blanca had a hit. Her line snapped and the fish was gone. We picked up and hit one last spot with little action before heading in.

Overall, it was a good day, I fished with some great people and then the food afterwards was also great. There's nothing like fresh fish. Tight lines to everybody and good luck.