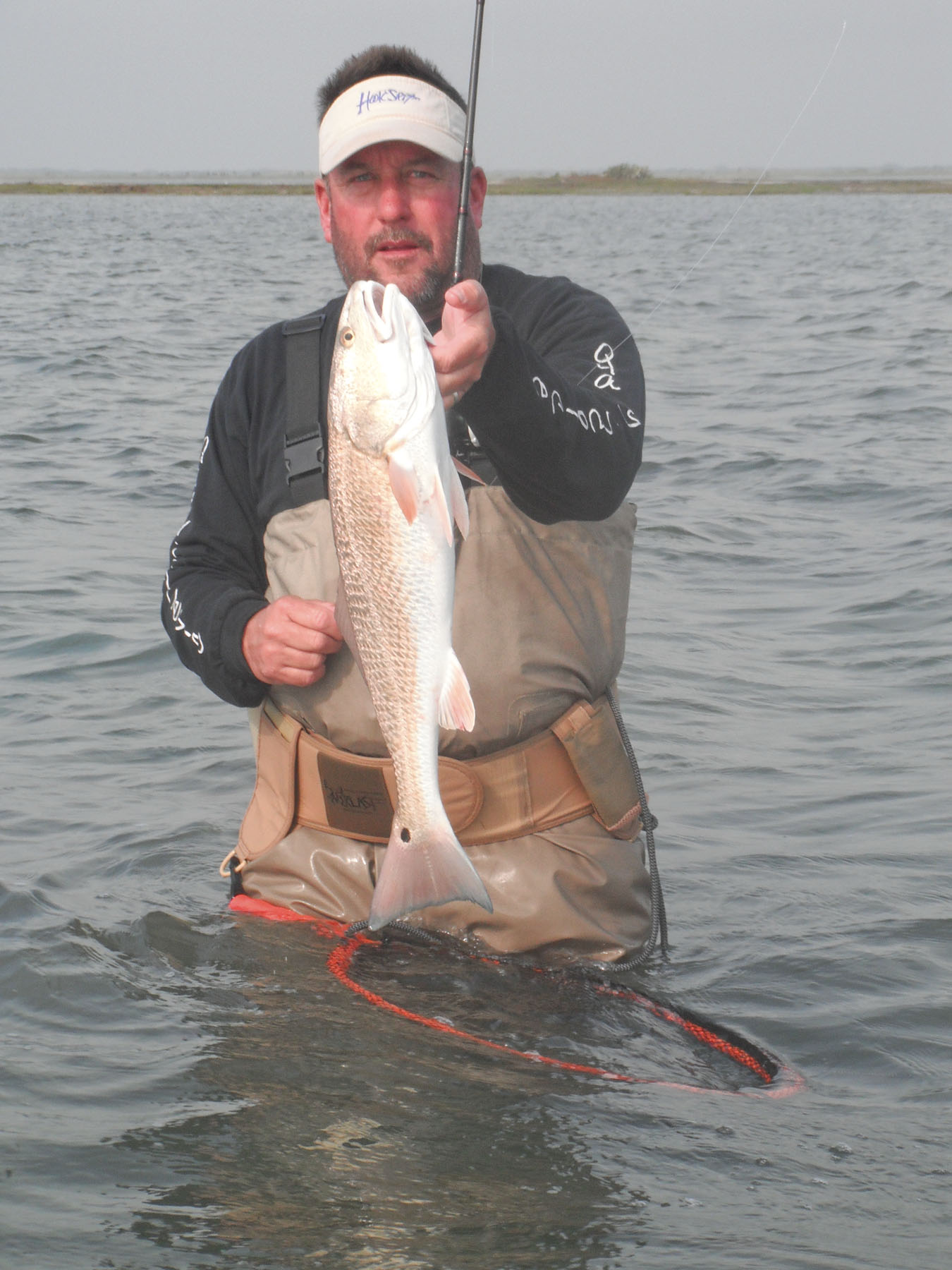 I think luck is a big part of fishing. I don't care what anybody says, there is always some type of "mojo" linked to fishing. For example: You go fishing with your friend and he/she is catching fish but you aren't. You can be standing right next to him/her, have the same lure, work it the same, but you still can't catch a fish. This is when you have no luck. I experienced a similar situation this past trip, but I was the one catching all the fish.

I went on a trip with my dad while he was guiding a group of guys for a small tournament that their friends put up every year. We met the guys at the dock and loaded up the boat. The host of the tournament, Dr. Ken Ellis, said "The youngest one on the boat is going to kick all of your butts" and that meant me.

My dad had fished up north the day before so that was where we were headed. We get to our first spot and start wading out. My dad told me to stay deep so I moved out and he and the guys stayed up shallow by the spoil island looking for reds. After about 30 minutes we hadn't gotten a hit at all. We picked up and headed to the next spot. Our next spot was the same spot that I had fished last time with Sonny, Derrick, and Aaron. The last time I had fished here, Aaron and I had caught trout over five pounds. It took us a while, but when we waded close to the shoreline we finally started to catch some rat reds. We then started to wade down the shoreline to the end of the spoil to a gut that usually holds fish. I was about 150 yards from the gut when I cast right up against the shoreline. When my lure hit the water, I hooked onto something that immediately peeled drag and thrashed in the water. I fought the fish and brought it in. To my surprise; it was another five pound trout. I had just gotten a new Sarge Customs rod and put it to the test with this fish.

After we took pictures and released the trout, we moved to another spot. This time I stayed shallow and the guys went deep looking for trout. The guys had better luck out deep than I did in the shallows because I didn't get a hit. My dad and the guys caught some keeper trout, but because they were fishing a blackjack tournament (the fish that is the closest to 21 inches is the winner), they didn't want to keep any fish that they couldn't enter.
Since we hadn't had any luck with getting the right sized trout or red, my dad took us to his flounder spot to see if we could pick up one big enough to enter for the tournament. This spot is in an oilfield cut up north that is really shallow. My dad walked us around the cut and had us walk down it back towards the boat. On the first cast, Jay catches a twenty-three inch red fish which is the only fish we see while wading down the cut until we reached a cove at the end.

The entire time we walked down the cut, we saw fish blowing up in that cove down at end of the cut. We walked slowly and were patient to get to the cove but we couldn't wait to get over there. We all lined up in the cove and started casting into it. The first to land a fish was my dad and then everybody started getting hits except Jay. I started to catch fish on every cast while Jay was standing right next to me not even getting hits. He got so frustrated and it was funny to the rest of us. Finally, I told him to stand next to me so that he could catch some fish but then he broke off and had to go back to the boat to re-tie. By this time, I was only catching small fish and everybody was already at the boat so I decided to go back so that we could move to the next spot but the guys wanted to go back in so we did.

When we got back to the dock everybody was happy and laughing because of the day's events. Although none of them had a fish to enter in the tournament, they were all pleased with the day. And I would also like to say that Dr. Ellis called it, so don't be to mad Jay.