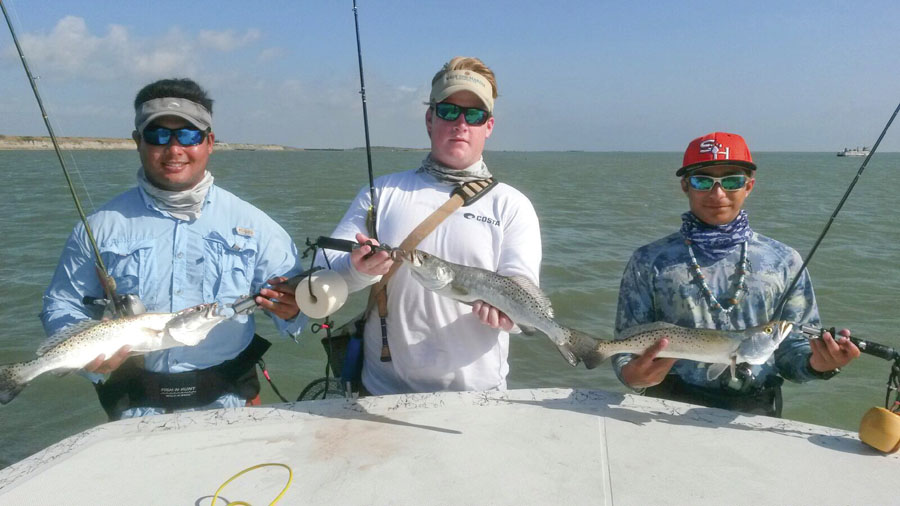 It has come to be that time–college. I will be heading to Sam Houston State University up at Huntsville and that means very little saltwater for me. I will, however, be starting a new chapter in my life with new friends. One of my new friends came to fish with me and my dad for a few days during the summer. Rick is a student at Sam and member of the Theta Chi fraternity. My dad went to school there and was also a part of the Theta Chi fraternity. I would like to share this last story before I leave for college about fishing with my new friends.

Rick and Graves met us at the dock at 6:00 AM. We loaded up the boat and took off in the dark. The blue LEDs light up my dad's boat so that we could see and move around more comfortably in the dark. My dad wanted to get to the area that he had fished the day before, early and before anybody else, so we left in the dark. We had a long boat ride ahead of us.

We got to the spot and we didn't get out right away, we took our time. It was early and we were still waking up. We got off the boat and spread out. Rick and I went up shallow, Graves stayed about waist deep and my dad was in the deeper water. There was a lot of bottom grass and floating grass in the area and it made it really hard to work a lure. It was either you got grass from working it too slow or too fast, there was no in-between. My dad was catching fish as soon as he got off of the boat, the rest of us were having trouble keeping our lures clean. It was to the point that I was getting frustrated. Rick, Graves and I caught a few fish, but my dad was catching one every few casts or so. We all moved over eventually and then we started to catch some. At the end of the wade we had a few keepers, not many but it was something.

We moved to a different area because most of the fish we were catching were undersized. The area that we were in now was deeper, about belly deep. We walked about 75 to 100 yards before we really got into the fish. From then on, it was almost every cast was either a hit or a fish. A lot of these fish were small but it didn't matter, we were having a blast catching them. All we wanted was a tight line and we got just that. Graves was with me this time, and Rick was with my dad. The area that we were fishing has lots of potholes. If you don't know what a pot hole is, it is a small area of sand surrounded by grass. We all had on a Kelly Wiggler ball tail shad in Mansfield Margarita. This lure was the key to catching fish.

We waded there for about an hour and a half, catching trout left and right, casting at the potholes. Almost everyone caught a limit. Graves said that this was the most fish he had ever caught while wading in one area and that it was phenomenal fishing. I'm so used to stuff like that because I've been fishing in Port Mansfield for so long that it's become the norm to me. I forget how hard fishing really is at times. You could say that I'm "spoiled" in a way. Well that day, everybody on the boat was spoiled; we were having a great time just catching small ones. It was a great day and I'm glad that I'm going where I am going because I will be joining a great group of people there.

With the end of this story comes the end of my time here at TSFM. It was great writing for the magazine and it has taught me a lot. I have learned more about fishing these past few years than I have my entire life. I've learned the struggle and the hard work that goes into being a fishing guide by fishing with my dad and various other guides. I hope that you all enjoyed my stories and maybe you learned something that I learned while writing. I would like to thank Everett for giving me the position and my parents and others who have helped me craft my stories for you all. If you would like to contact me, you can find me on most social media.