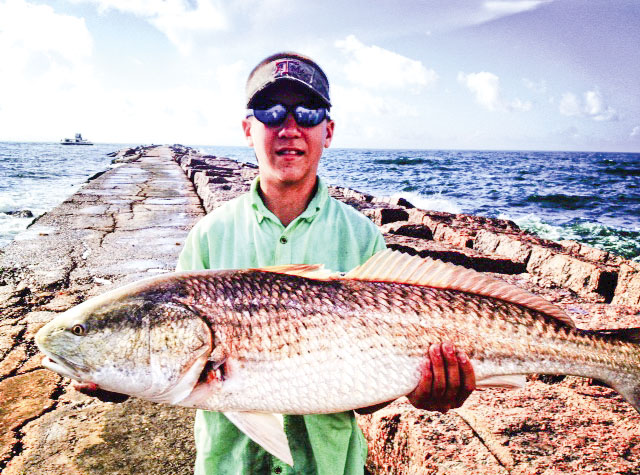 Summer is just around the corner and it will soon be time to start signing up for summer camps. This past summer I was a counselor in training (CIT) at the Outdoor Texas Saltwater Camp in Port Aransas, Texas. The activities at the saltwater camp consists of kayaking, fly tying, knot tying, bay fishing, offshore fishing, jetty and surf fishing, and an overnight trip on a floating cabin in the bay. Being a CIT meant that me and my co-CIT Garret Peay were in charge of cooking breakfast, getting the kids up in the morning, cooking lunch and some other responsibilities. I had fun even though sometimes the kids would get out of hand. Our campers had fun and we had caught a decent amount of fish for the week. The highlight of the camp we our offshore trips, jetty fishing trips, and the trips overnight trip on the floating cabin.

First, I want to talk about the jetty fishing. Fishing had been slow early on in the week and we had been going to the jetties in hope of catching a few fish. One day we had headed out in the morning to get a good spot out on the end of the Port Aransas North jetty. We got all of the gear distributed and rigged up. Fishing started off slow but one camper had a big bite. The fish ran and ran and ran. Finally, after taking almost all of the line the fish broke off and we had to rig the rod again. A few minutes later we had kids come ask for some more lures because all of theirs had been bitten in half. We gladly tied on new lures and sent them back out to try and catch the fish that took the other half of their previous lure. Garret grabbed an extra rod, tied on one of the half eaten lures and chunked it out pretty far and not soon after did he hook on to a nice bull red. After Garret had caught his red a few of the campers started hooking up and we landed a few more nice bulls.

Now the offshore fishing wasn't my favorite because I do the same thing out here in Port Mansfield quite often; without the bait, people, and a lot closer than 12 miles offshore. Putting my own thoughts aside, and putting the kid's enjoyment first, I did the best I could to make it as much fun as possible for the campers. The ride out to our spot was a long one so most of us took naps on the bunks aboard the boat. When we get out to our spot the deck hands rigged our rods with dead ribbon fish and we let out the lines into the water. Its not long until a few people hooked up on kingfish at the same time. The kids must have caught close to 40 kings between the 13 of them. They even had a few sharks and one bonito out there. The kids had a great time and we were happy that they enjoyed this part of the camp.

Lastly I'm going to talk about my favorite part of the camp, the overnight trip on the floating cabin. This is probably where the most fun is at besides at the jetties. We start by launching kayaks from the Red Dot Pier in Corpus Christi and paddle maybe a half mile to the floating cabin. I have my fly rod, my conventional rods, and all of my lures with me in the back of my kayak. Some campers have tackle in their kayaks and others have our food and drinks for the night. We get to the cabin and string up our kayaks once we are all up and on our feet. We take our gear and food inside and then start up the generator so that we can turn on the halogen light for later. Night falls and the big halogen light is blazing into the water, attracting all of the nearby trout. When we hear the pop of the trout feeding, we all grab rods and start casting away. I load up my fly rod and catch a few fish here and there. I give my fly rod to one of the younger campers so that he can catch some fish and so that I can go help unhook fish and measure them. The campers definitely enjoyed this activity.

Everybody enjoyed this camp and I had fun working with all of the kids and teaching them how to use different techniques. It's a great way to spend an entire week fishing if you're up to the challenge of waking up early and having fun all day. If you're interested you can visit www.OutdoorTexasCamp.com for more information.