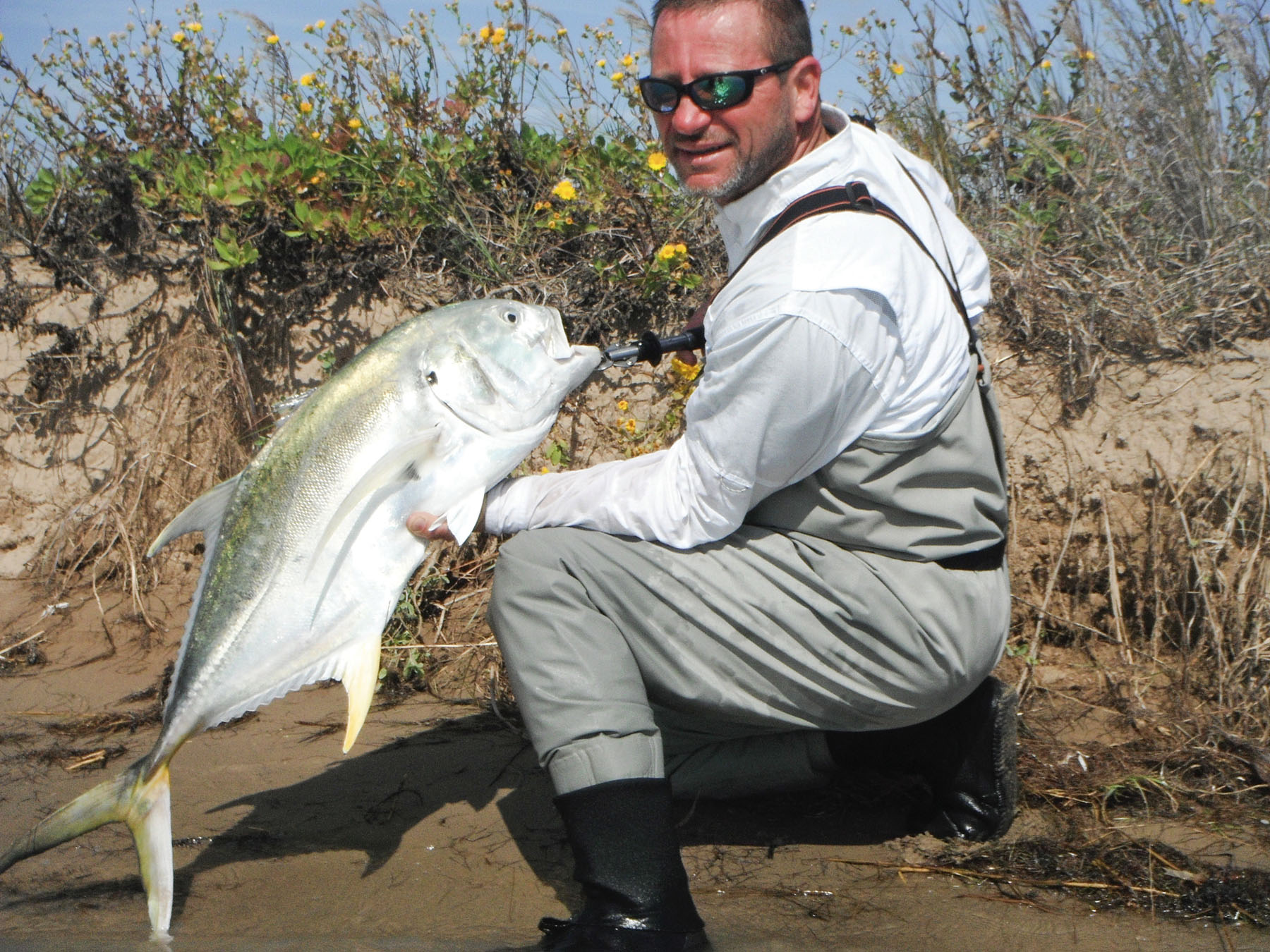 Ken posing with his jack after a long fight.
The morning was cool and fresh. My dad, Daniel, Aaron, and I waited on the dock for the guys to show up. My dad and brother were going out on a duck hunting trip while Aaron and I were off to hunt some trout. Mike and Ken were the guys we were fishing with that day. Mike had recently visited Getaway in July. He's wanted to fish with me since my dad told him pretty much everything about me. My reason for not fishing with him and Ken was that I was in Port Aransas working at the Outdoor Texas Saltwater camp at the time. Now we had the chance to finally meet and fish together.

We left the harbor a little after the sun had started rising and before we left, Mike and I made a bet. The bet was that whoever had the longest total length of their two largest trout would win $50. It seemed to me a reasonable bet, so I accepted. I love to have any kind of challenge while fishing because it makes it more interesting and fun.

We ran east of port and stopped at a spot that Aaron had recently fished. The water was a milky green and there was lots of floating grass. The floating grass hindered our use of the topwater, but we used them still. It started off slow, real slow. We had a few blow ups here and there. Ken caught a rat red or two on Gulp early in the wade.
We walked and walked and then finally, Mike hooked up. He was far ahead of me and apparently in the hot zone too. He had a caught a few trout up there and one of them was a decent 16-17 inch fish. Mike was in the lead with only one fish, but I didn't sweat it. It was only one trout and were there's one, there are plenty more.

I kept my hopes up and the blow-ups helped too. I thought, maybe, I might have one get on my hook the next cast. It went on and on. I was soon getting discouraged slowly and then, from up ahead I hear Mike holler up in front at about 100 yards. Mike had landed a nice trout. It was about 25" and the destroyer of my chances of winning.

Not having caught a fish yet, my hopes of winning the bet came crashing down. But there was still some light at the end of the tunnel. If I caught two decent trout over 20" each, then I might still be able to win. It was time to start working at it. I walked slow, fished every spot around me that I could. I casted behind me, to the left, to the right straight down ahead of me, but nothing worked. Until finally, I set the hook on a trout. I knew right away, that this trout wasn't going to do me any good for this bet.
We started getting closer to a drop-off so Aaron decided that we should load back up on the boat. We saw plenty of fish on the first wade, so Aaron dropped Mike and I off where we started. We worked our way back up again. And like the first wade, it was slow with little activity.

Mike and I saw Aaron and Ken, moving up and down the Intracoastal in front of us. We didn't know what they were doing until they came and picked us up. They were chasing jacks. So we got on the boat and rigged up the rods with topwaters to catch jacks. I lost the bet and fifty dollars, but it's just a bet.

We were in the Intracoastal, searching for the big school of jacks that Aaron and Ken were just on. The tide was coming in and so was the water from the gulf. The water was a very beautiful blue. We passed right over the school and immediately Aaron turned around and put us on top of them.

Mike and I got to the bow and casted. We "purposely" crossed lines and reeled in quickly as to imitate bait fish rushing and scattering to bring up the jacks. We both hooked up and the fight was on. Mike handed his rod to Ken and I lost my jack not soon after. Ken fought the jack for about 35-45 minutes and then I was finally able to grab its tail to call it a catch. We took pictures and then we released it back into that beautiful, blue water that we all consider home.