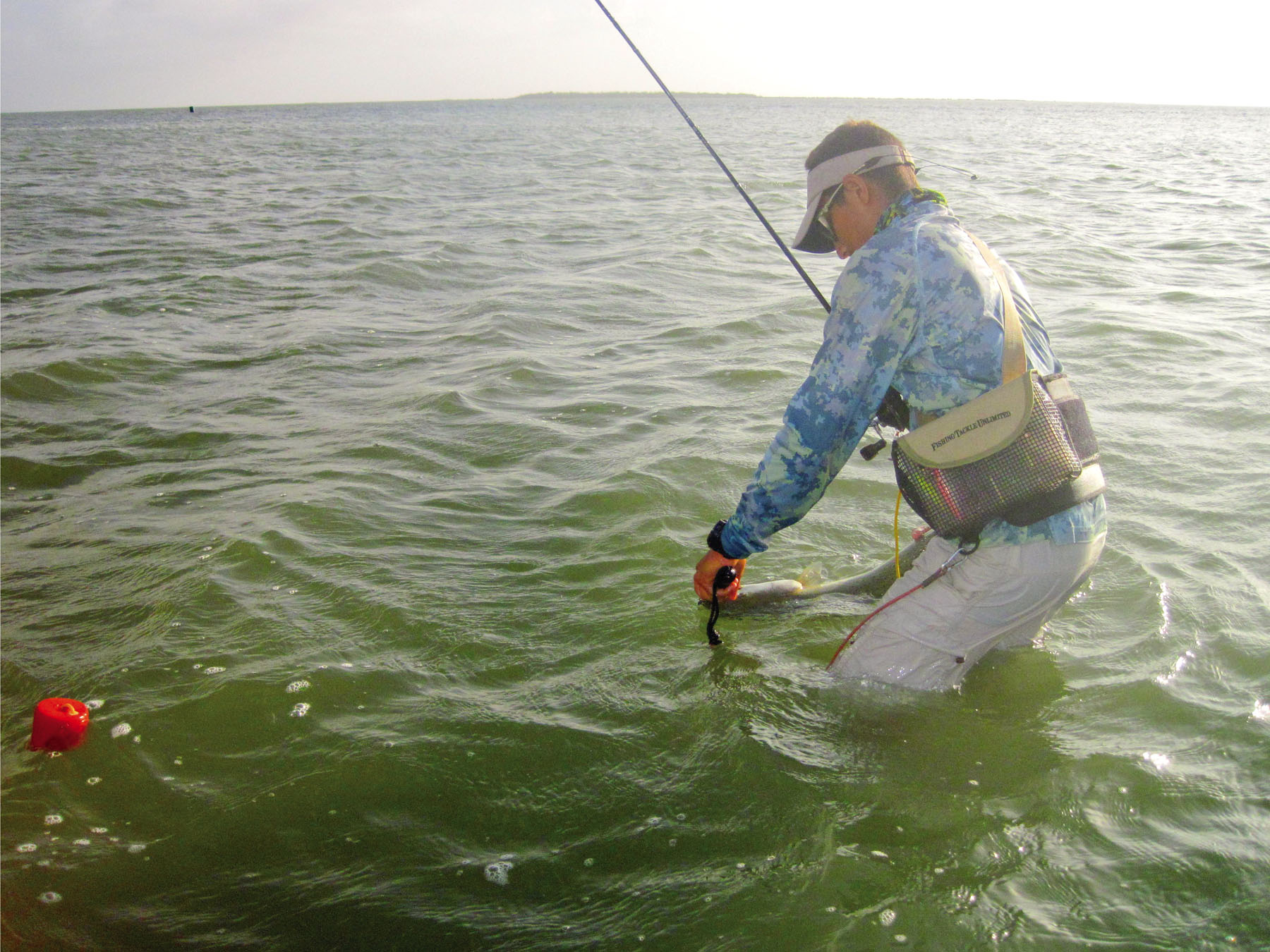 We left the Port Mansfield harbor just as the sun was rising. It was Sunday and we were trying to beat the weekend traffic to our spot. My dad and I had been fishing this spot frequently for the past three weeks and catching fish about 250 yards up from where we usually anchored the boat. My dad let Mr. Holcomb and me out to wade while he drifted with Mr. Holcomb's father and father-in-law. Rick and I worked the area pretty well. He worked the flat while I worked deeper toward the Intracoastal. We fan casted to cover more water because it was just us two wading. Rick and I walked slowly to work the flat thoroughly and to try and comb out every fish we could because we had only about a 200 yard area to wade. The fishing was slow. We had caught a few small trout and had only one trout on the stringer that was about 20 inches long.

Rick and I walked for a period of time without getting any hits on our plastics. We walked and casted with no luck. Finally, I had a hit and with no warning, the fish leaped out of the water and threw the hook. From what I could see, it was a very large lady fish. And then we got into a school of small trout for about 15 or so minutes. It was a tight line and it was a good break from the slow fishing. It helps to keep the mind off of the lack of catching and the monotonous walking and lure working.

A few casts after I had caught a dink trout, I set the hook on something big. I didn't know what it was until she jumped completely out of the water. I was hooked onto a big trout. The surface exploded as her whole body erupted from the water. Three times she rocketed out of the water. After the third, she didn't jump, but she still fought me hard. She thrashed in the water and made me shake where I was standing. I knew that this was definitely my biggest trout yet. I also knew that it would be the biggest trout that I would catch for a while. So I took my time getting her to me.

I loosened up my drag and let her run until she didn't have any fight left in her. I kept my line tight and brought her up next to me. The hard part was trying to get hold of her. She still had enough fight to evade me every time I tried to use my Boga. Finally I got the chance and I got her. I held her up to my rod and saw that she reached the 28-inch mark on it. I triple checked this just to make sure that I was looking at the right mark on my rod. I had indeed caught my personal best trout by length but I was a little disappointed to see that she only weighed 6 pounds. I was ecstatic nonetheless.

Of course when something like this happens, I never have my camera. It never fails. Luckily, Rick had his camera and a GoPro with him. Rick got the fight on video and we took pictures of the fish. Afterwards, I released her back into the Lower Laguna Madre to live and fight another day. Rick got photos and video of the release. As I watched her swim off into what seemed to be an endless bay, I removed the lure that I had caught her on. This was the trophy that I took for the day.

I was all hyped up now that I had caught my personal best, and that fish really distracted both of us from the slow fishing. After about 15 minutes, my dad pulled up to us. My dad told us how Mr. Holcomb and Rick's father-in-law had caught a few decent fish while drifting and that they had lost a few big ones also. Rick and I both told my dad about my achievement and showed him the pictures. My dad and I were both hoping for a STAR tournament winner but I was just as satisfied with letting her go. To me it's not the kill that matters, but the excitement in the fight and the feeling that you get when you release those big fish. I hope everybody has had a great summer and good luck to all out on the water.