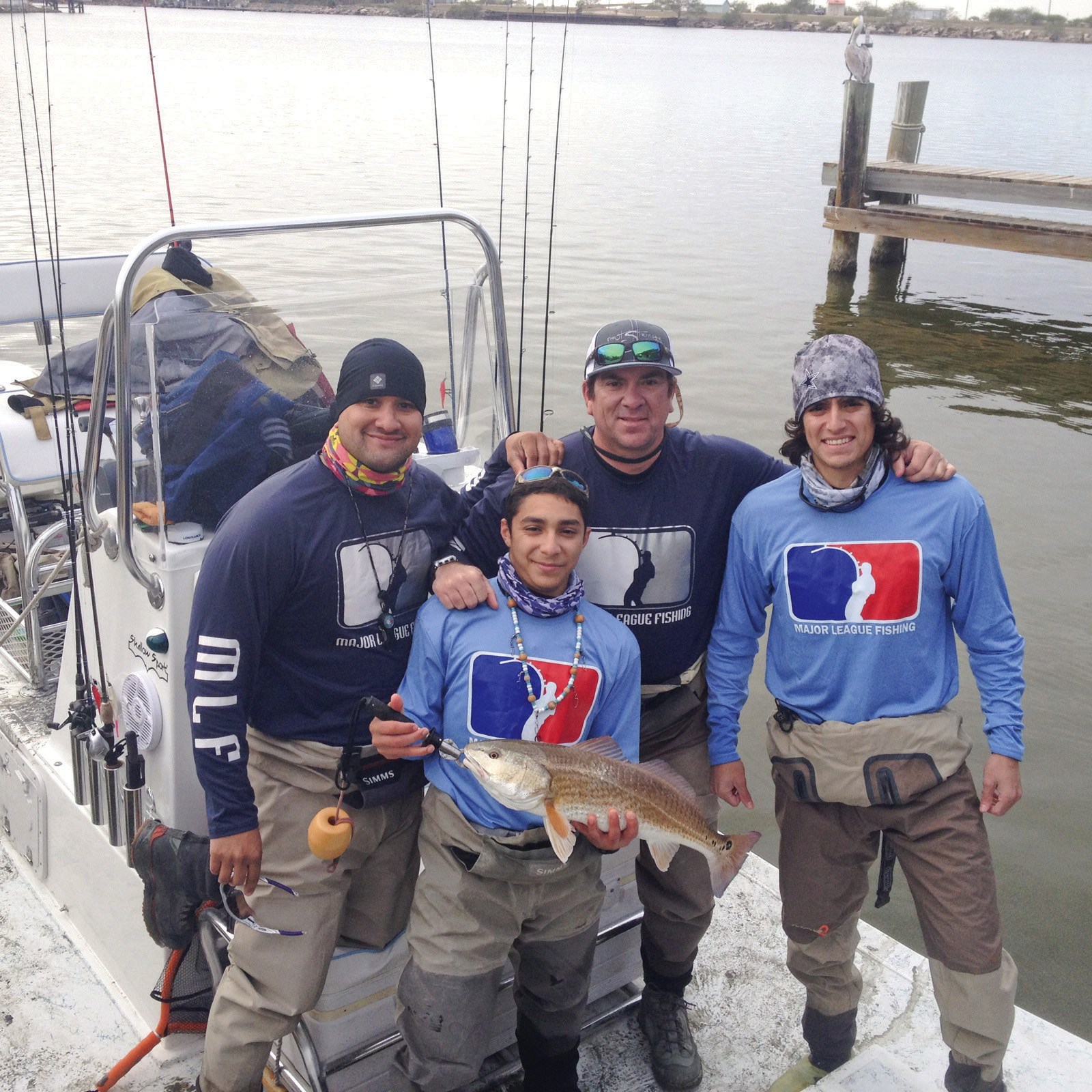 My day actually started at around 6AM because that's when Sonny, Dave and Derrick got to Port. We iced down the boat, got the snacks and drinks onboard, and then got our waders on. Today we would be fishing a tournament. It was an artificial lures only tourney, and there were only three boats fishing it because it was cold, and probably also because it was artificial lures only. We waited at the boat ramp for about an hour for some light to start showing before we left.

Our mission for the day was to catch the biggest slot red, biggest flounder, and biggest trout up to twenty-five inches. Three fish four Fishkateers and many hours to find these three perfect fish.

Our first stop was in an area that was reported to have been holding some nice fish. We got off the boat and spread out pretty good. I started off with a topwater and everybody else was using plastics. After about 20 casts, I switched to plastics. Now we were all set and focused on finding our fish. We walked for about 30 minutes without a single hit. Then off to my left, Derrick hooked up. He brought in the first keeper trout and our only fish so far. That was the only bite that any of us had in that spot so we picked up and moved to another.

We sped down the Intracoastal and saw thousands upon thousands of ducks flying and landing. We moved up into the shallows and started to see mud boils. Signs of redfish being spooked by us passing by. The further we ran down the shoreline the more mud boils we saw and so we eventually stopped. We drifted for a few minutes to observe the area. Then we heard a boat behind us. It was another boat from the tournament.

As the boat passed us, Dave and Sonny decided to play a joke. Dave got his rod and Sonny got a net. They both got on the starboard side of the boat and Dave started splashing water with his rod tip and Sonny got down like he was about to net a fish. It was pretty funny and we all laughed as they were doing it. It was obvious that we were just there to have fun and that it didn't matter whether we won or lost. Now it was time to get serious again and so we got off the boat and did a short wade with no profit.

We moved to another spot a little further south. We got off and started to wade. I was headed straight towards the shoreline when I jumped off the boat. I was looking for some reds or a bigger trout and I knew that they would be up on that shoreline somewhere. We walked and walked. Then Dave hooked up on a trout. We upgraded our trout but still not even in the game.

Soon after, Derrick hooked up and caught a bigger trout than Dave's. Sonny and I watched as we both had caught nothing. It was quiet for about 15 minutes and then I hooked up. I thought it was a nice trout that was on the other end of my line but it turned out to be a red that was about twenty-one inches. Now we had a red. Now we had some weight.

Then it got quiet again, nobody had any hits for a while. We decided that it was time to move again. Right when Sonny had picked up Dave, I hooked up again. It was another redfish. This one was about 24" and weighed almost 5lbs. After that we moved around and we didn't have any hits.

We moved back up north and Derrick had one nice hit but broke off when he went to set the hook. We all knew that he had broken off a big red. We moved to another spot about 15 minutes from the harbor. We were going out on one last effort to upgrade both of our fish. We waded for a while and then we heard Derrick holler. He was hooked up on a nice red, a red that would definitely win the tournament for us with 30 minutes left for us to make it back in time for weigh in, we kept fishing.

Soon Derrick hooked up again, it was another redfish but it wasn't as big as the first one. We had a few minutes before we really needed to leave so we took the time to take pictures. We got to weigh in and we won with only two fish. We were surprised but didn't complain.

This was my first tournament win and it was with the Fishkateers, what could be better than that?