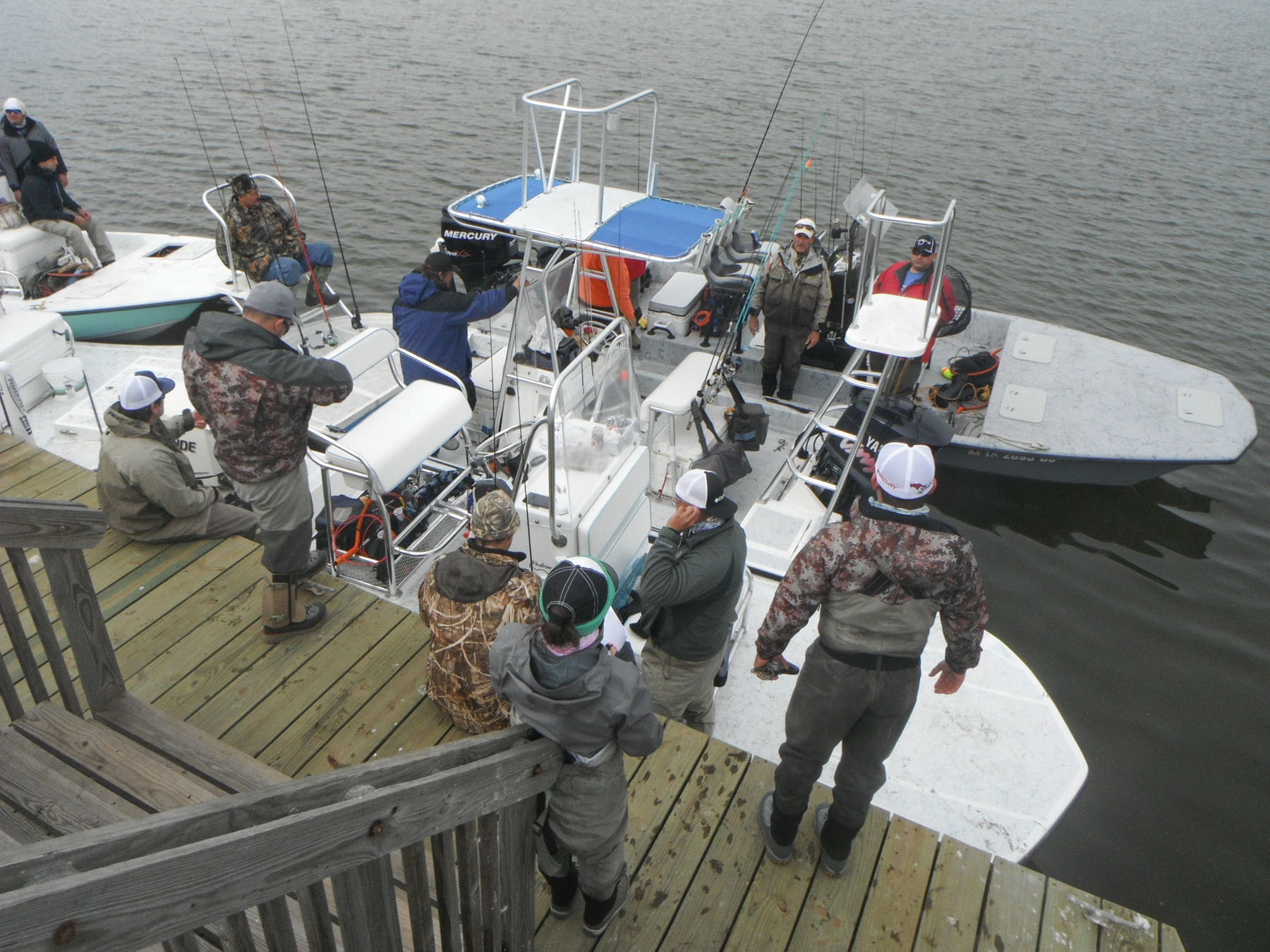 I woke up at about 5:30 in the morning and got suited up for the day. I was wearing at least three layers underneath my waders, plus a pullover, a softshell WindStopper, and a wading jacket. A real strong front had blown through a few days before and we were still enduring the chill of it. I made sure that I dressed warm.

I met Sonny, Dave and Michael (the new guy) at the dock for another tournament at six o'clock. We talked a while and tried to stay warm while Sonny put fuel in the boat. We all loaded up our gear, untied the boat, and idled our way to the pavilion dock for check in. We were the only ones out at that time and we got cleared to leave the harbor. We slowly made our way to the mouth of the harbor and we took off.

We were heading for a spot that my dad had been catching big reds in for a few days. We got off the boat and got into the frigid water. We were all hoping that we could catch the fish real soon because we were so cold. It was probably the coldest day that I had ever fished in my life.

After about 30 or maybe 45 minutes, I couldn't handle it anymore. I had to go back to the boat, I thought I was feeling water run down my leg and I just couldn't fight the cold. None of us could feel our feet or our hands, it was that cold. I got back on the boat and sat on the cooler trying to warm up while the guys stayed out there and fished. Eventually, I nodded off.

The guys woke me up when they started coming back to the boat and I had no idea how much time had passed. They told me it was an hour but I could tell that it had only been about 20 minutes. The guys didn't have any luck while I was asleep. We all had an awesome sandwich that brought a little warmth. After our sandwich, Michael and Dave got back off the boat in the same spot and fished. I went with Sonny scouting in the shallows to see if we couldn't find any fish. We didn't. The shallows were empty, I didn't even see bait back there. We turned around and headed back towards the guys. I realized when we got back that it wasn't going to get warmer anytime soon and got back to fishing. I had to do whatever I could to help the team and win the tourney. We had won the last tournament and we were determined to win this one too.

We fished and after being out there for almost four hours, the only person to catch a fish was Michael. He caught a decent red, now we were on the scoreboard. It wasn't all that much but it was something. We left the area after that and headed for a new one. We had a pretty good idea of where we were headed. We had a plan.

We staggered ourselves at about 500 yards apart along the shoreline. We tried to cover as much water as possible. Dave and I were ahead of the group, Sonny in the middle, and Michael in the back. Not much longer after Sonny dropped us off, I caught a fish. I caught about an eighteen-inch trout, the only trout we had seen all day. We had two fish now and we were definitely in the game.

We just needed to upgrade our fish and we would have a pretty good chance at winning again. After I caught the trout, I had another hit. I missed it, but another hit meant I was casting in the right direction. I casted over towards the shoreline again and had another hit. I was getting close. I had one more hit and then it was over. I didn't get anymore after that. We moved again.

The sun was finally starting to come up and things looked for the better. The heat from the sun made it awesome and bearable. Michael and I caught one more red each and then we had to make the run back to port to make it in time for weigh-in.

We got second place, which isn't bad, especially for my second tournament with Sonny and Dave. Hopefully there are many more wins for team MLF.

Good luck to you all and most importantly, have fun out there.