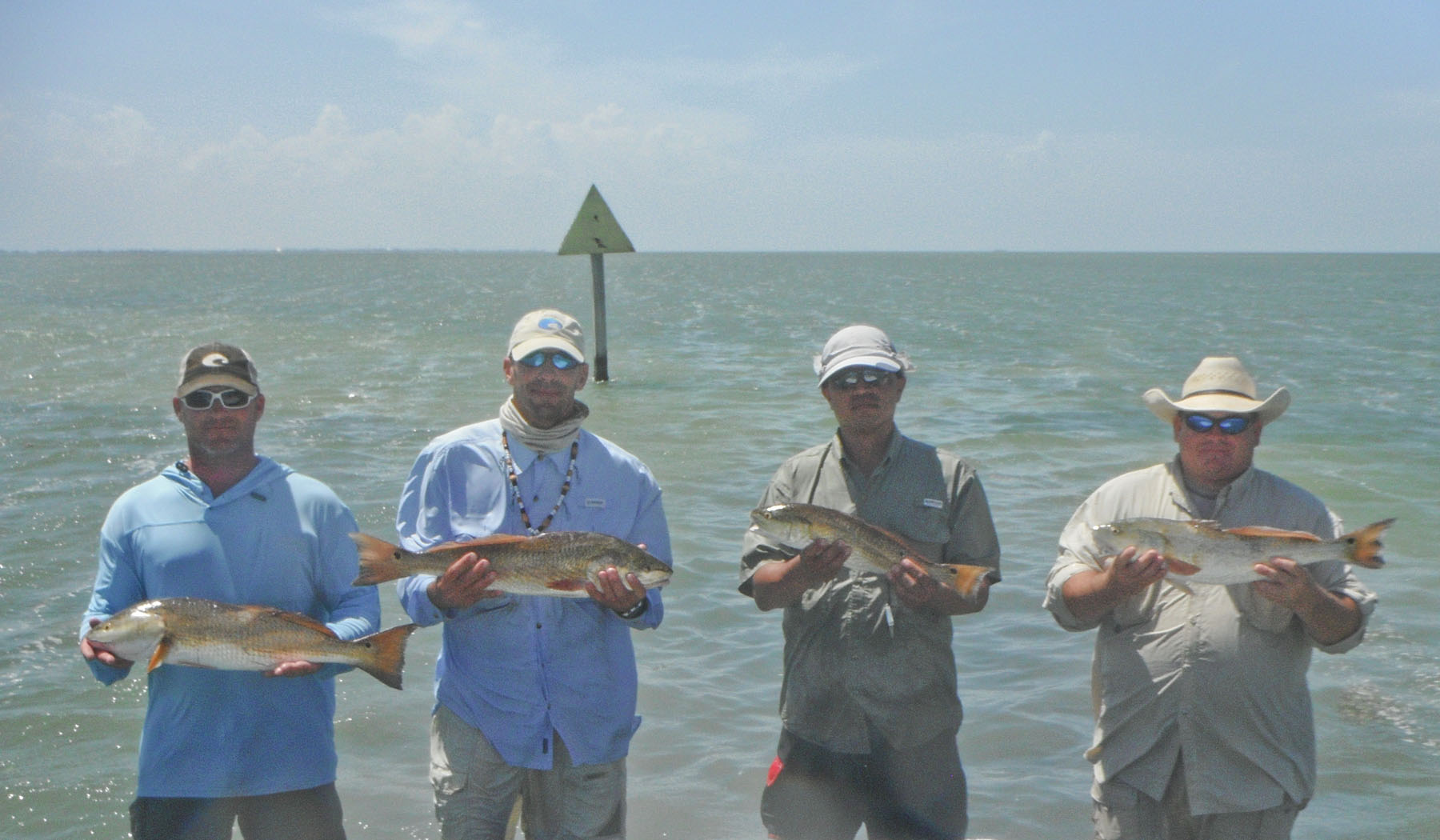 Fishing isn't always good down here on the Lower Laguna Madre. Just like anywhere else, we have bad days on the water. This is just part of fishing. We have to accept it. All we can do is fish hard and hope for a good day. Sometimes the best day of a trip is the first day and sometimes it's the last day, it really just depends on the conditions. On this past trip that I went on with my dad, it was the second day that the fishing was excellent.
Ready to redeem ourselves from the previous day; Kelley, Chad, Mike, Bobby, my dad, and I left C dock earlier and headed to our first spot of the morning.

It was about 9 o'clock and the water was crystal clear. We were spread out pretty good and everybody had a tight line, be it keeper or not. We strung a few solid trout and if I would have had a landing net with me, we would have strung a few more. It was too good to last as it seemed.
We had arrived at the tail end of the bite. Capt. Ernest picked up and left, but Capt. Aaron and my dad stayed in this spot, we just moved over a little to the west of where we had started. My dad stopped the boat and put down the Power-Pole. The guys waded downwind but I went straight into it. A few slicks had popped up behind us and I wanted to see if any of the fish responsible were still hanging around. They weren't so I started back down wind. After about 30 minutes, we finally started to get into some fish. One of us would catch a trout here and there until we walked up on a large plot of grass lines.

Once we were there, it all started to go down. Bobby was the first of the group to get a bite. He cast to the edge of the grass line, twitched his lure a few times and then his rod was doubled over. He fought the fish and finally got it to him. It was a red just shy of 20 inches so he let it go. A few casts later, Bobby had another red on the line but broke off. He re-tied and cast back out. He hooked another red and this time he strung it. This was just the beginning of what was to come.

I was standing next to Bobby and the both of us were catching fish. He caught his limit of reds and I caught my limit of trout. We were catching so many fish that we were throwing back nice keepers. Soon it was my turn to hook on to a red. I cast at a pothole in between two grass patches and as soon as my lure hit the water I was hooked up. When the fight started I knew that I had a big red on the hook. He fought hard but it was useless. He ended up in Bobby's net and on my stringer. After taking some pictures, we got back into the action and I called Mike over but the action faded so we picked up and moved back to where we started the wade and had lunch.

After we had lunch Capt. Ernest showed up with his guys and he and my dad started being the funny guys they are when they are together. When we were all done laughing, Aaron showed up with his guys and we all set back out again. All of the guys from the three boats lined up together and started to catch fish. I wasn't planning on getting back out but my dad sent me out to go help the guys if they needed it. I had no problem with it so I got back out there and almost immediately caught a solid trout. A few casts later I caught another. After a while I told Chad and Mike that it was their turn to catch a red. I was right, surprisingly, and a few casts later, both of them had caught some decent sized reds. We ended their trip on a good note and they all enjoyed it. I hope you all have a safe summer and tight lines to everybody.