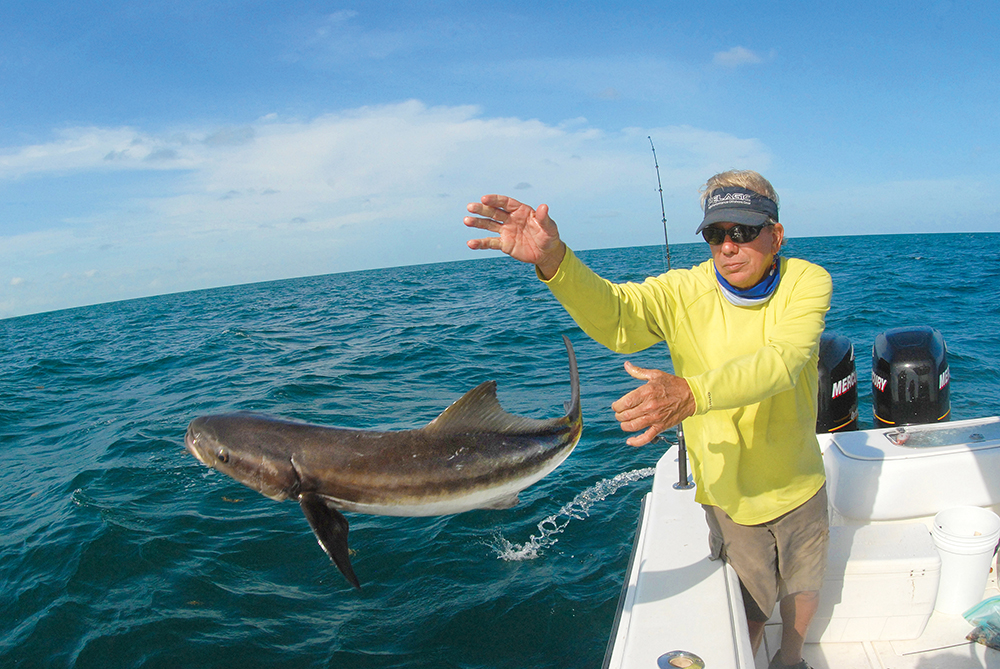 John Milne releases a ling off Port O’Connor. These fish are tough to land, handle or toss back.

Texas had a lucky run of 32 years since the last big winter freeze that seriously crippled coastal bay fish populations, and we’re thankful for that. But overall we’ve now had four big freezes in the past 38 years, a sober reminder these events do happen, and have since records were kept. Last February’s cruel blast was matched with angler effort and fishing pressure now at historical highs. As a result, some bay tournaments have been cancelled or certain species eliminated from the lineup. Some have even turned to catch and release.

After last winter’s serious bay casualties, there is motivation to learn or practice catch and release, perhaps keeping only a couple of fresh fish for dinner, preferably something other than trout. Releasing fish helps one realize that the bays are not one big grocery store with a never-ending supply.

My attitude towards releasing fish traces back to 1987, when I set a difficult goal of tagging and releasing 1,000 Gulf fish (no catfish) during that calendar year. Not an easy task when you live in the middle of Houston, but somebody had to do it. Every tagged fish had its own data card to fill out listing species, length, location, date, etc. During heavy action we had to work fast, and those cards sometimes carried permanent bloodstains from me or the fish, and sometimes both. Imagine dragging kingfish into the boat one after another without using a gaff, flopping around with teeth snapping. Measuring and quickly jabbing deep a spaghetti tag. If memory serves, we tagged 172 kingfish and 107 ling that year, among other species.

We were told by non-believers that releasing fish was a waste; they always die, but it wasn’t true. Some of ours were recaptured in faraway lands. We tagged from Port Arthur to South Padre and our fish showed up sometimes years later, anywhere from Cape Canaveral, Florida to Mexico’s Yucatan peninsula. It was strong evidence that Gulf resources are in fact finite, they don’t always just disappear back into the waves. Amazingly, someone I knew in Alabama recaptured one of my Texas kingfish, offshore of Mobile Bay. It was proof that catch and release really does work. (Note: It’s a lot easier on fish to shake them off a hook back in the water, rather than land them in the boat, measure and stick with a tag. Catch and release can go too far on juvenile fish; there is no point in targeting dozens of small, delicate undersized trout with bait, just to throw them back).

A few friends showed interest in our catch, tag and release back in ’87. They gathered up some fishing buddies, and we had a tag tournament out of Galveston Yacht Basin (back when it was accessible and cheap). They were all experienced anglers. Boats were launched and spread out in perfect, late-summer weather. All fish were released, and data cards were tallied back at the dock. Even the little boats, including my 17-footer, were free to roam. I’d picked 10 top sport species that could be found in the bays or up to 20 miles offshore. A big (donated) ice chest was the prize. There was no entry fee and we didn’t worry about cheating. The day’s big stack of data cards was mailed in bulk to Fish Trackers in Flour Bluff, where they were sorted and entered into an archived data base.

The same thing could happen today, and that’s just one form of a release-all fish tournament. While participating, anglers may realize it isn’t that painful to release fish, especially not after a recent, devastating freeze in the bays. In recent years, it does seem like more anglers are receptive to the idea of releasing fish. In 1987, not so much. Back then it was the older generation, raised without size and bag limits of any kind on Gulf fish, who looked askance if we even mentioned fish release. I remember those days 50 years ago, when people in Port Arthur sold their fish to pay for the trip.

Another source of educating the public and promoting catch and release is from  fishing guides. In my guiding experience, anglers have been generally open to advice about conservation, keeping some fish and releasing others. The problem with guided trips keeping a pile of fish, sometimes filling wheelbarrows, is that the guides don’t offer an opinion on the matter during the entire day, or even drop a few tips on coastal conservation. I’ve found that people from upstate generally have little knowledge about the habits or population densities of coastal fish, or even the species available. They usually want to carry home “eating fish” but if you tell them that a big trout can carry up to a million eggs, they generally agree it should be released. That’s a speech I make before a big trout is landed. A quick picture, and off they go. I may have offended some people, but they never said so. They might not have returned to fish again, but that’s okay.

On some days I’ve even had customers at day’s end say they really didn’t want to keep fish, could I give them away? Which was annoying. Charterboat captains and guides going back almost a century, have hung up their fish at the marina as advertising, hoping to snag passerby customers for the following day. That’s especially true on docks with a lot of tourist foot traffic, and not so much in the smaller towns. Thankfully, with today’s social media, pictures of a good fish can be sent to friends or clients in a minute or less while the action is hot. (Often with the GPS number attached to the photo, a cellphone function that should be turned off and kept away from Facebook at all costs).

Uniformly cutting trout limits to five has certainly made a guide’s job easier, since clients almost uniformly want trout and it means half the work and more trout in the bays. The guide spectrum on release varies widely, ranging from indifference or scorn, all the way to guides in South Florida, where red tides in recent years have impacted their trout population. Today, some guides there won’t allow anyone to keep a trout if it doesn’t croak. Croaking means it’s a male trout, not one of the precious females in short supply, fish that carry many eggs and batch-spawn repeatedly through the summer.

There are a great many Gulf species not affected by last winter’s freeze, and even a small boat will reach up and down the jetties, distant surf, or near-shore artificial reefs and rigs in the Gulf. I’ve always been partial to jetty action instead of wading the bays, and that’s probably why I’ve never been hit by a stingray. Along with a few friends, I have been crippled up from jetty miscues, slips and falls, however. Even pushing 70, I’m still fond of walking those Texas jetty rocks, slinging spoons for a variety of fish out there. Many of them migratory species that never even noticed last winter’s Texas freeze.