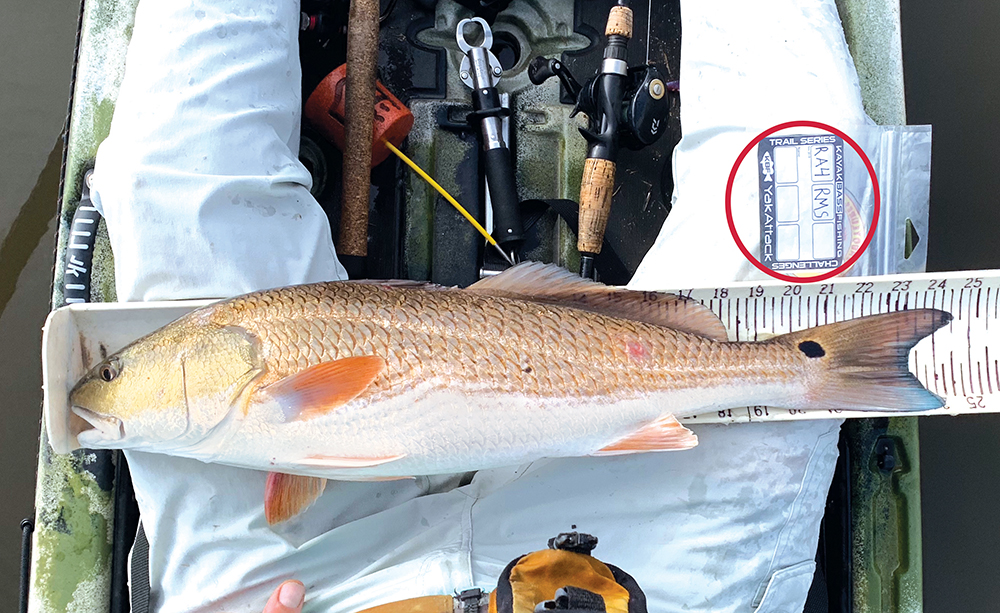 Note the "unique identifier" is included in photo submissions. These are issued in a fashion that helps insure fish were caught and photos made during specified fishing hours.

Everything in our world is constantly changing and fishing is no exception. Often times it is advancements on fishing gear and techniques, maps to help anglers find new spots, navigational technology, and the list continues. One aspect of the sport that has seen very little change since the beginning is tournament fishing. However, within the last few years we have seen a trend in tournament formats that does not require a traditional weigh-in.

We started to see this change with professional bass anglers after they realized how much stress is put on a fish after being caught. Between spending all day in a live-well, getting dragged around in a bag to the scales, and then being released in foreign waters, there was a significant mortality rate. So someone had the idea of changing that by having anglers with their own certified scale weighing their fish and releasing them immediately. Thus the beginning of Major League Fishing.

On the saltwater side of things we have been slow to accept this change, but this year we are going to see it and I believe it is going to stick around. In light of the recent freeze, we are recognizing that we need to take as little as possible from our resources and give them a chance to bounce back. This year along the Texas coast we are starting to see several tournaments switch to the Catch/Photo/Release format. Now this is nothing new to kayakers, but to the rest of the fishing community, it is a revelation.

The current CPR format originated with kayak bass anglers; keeping five bass on a stringer is impractical. So, the next best thing was to determine winners by the length of their five longest fish – whoever has the most inches wins. Since then, saltwater anglers have adopted the practice and have several different types of tournaments across the coast.

With the rising popularity of CPR tournaments, there has been a demand for a platform to make the process of hosting one of these tournaments easier. There are several apps currently available that cater to every aspect that can be imagined when it comes to hosting an event. You can choose species, number of fish to be measured, individual or team event, etc.

Let’s say that TSFMag is hosting a CPR tournament and the format is the three longest trout. An angler can then download the appropriate app and sign up for the event. The night before, the tournament director will release a unique identifier code that has to be in the photo of the fish. This is to ensure that the fish was caught within the specified hours. Once you get the identifier and you catch a trout, it is then time to make your photo. You place it on a measuring board, facing left with the belly of the fish towards the angler; note that every measuring board must have a 90 degree lip. Once the fish is settled on the board, make sure that the nose is against the lip of the board. Once there, place the unique identifier in a spot that is visible, stretch the fish to max length and take a photo. Be sure to take several!

Once you have a good photo, open the app and submit your fish. It’s that easy! Another great thing about the app is if you happen to upgrade by catching a larger fish, you can go back and cull your catch. Then after your submission, the judges will examine it and, if accepted, it is applied toward your total score. At the end of the day, the angler with the most inches wins the tournament. The rules will vary with every tournament but that is gist of it.

I know this may be a new and somewhat foreign concept and it is going to take some time to get used to it, but I believe we are going to start seeing more tournaments like this. I know that Babes on the Bay adopted this format this year and CCA Texas did as well for any of their sanctioned tournaments. I have been helping my local chapter organize one here on our end of the coast and I believe it is going to be a great event.

With this new format coming into play, I know that it will do nothing but help our fisheries; especially for larger, multi-species tournaments. This will ensure that anglers can still have a friendly competition and be able to help conservation by releasing their fish. It may be new but I promise it is just as exciting as any other tournament. If you happen to have a CPR tourney in your area, be sure to sign up, have fun, and help sustain our fishery!