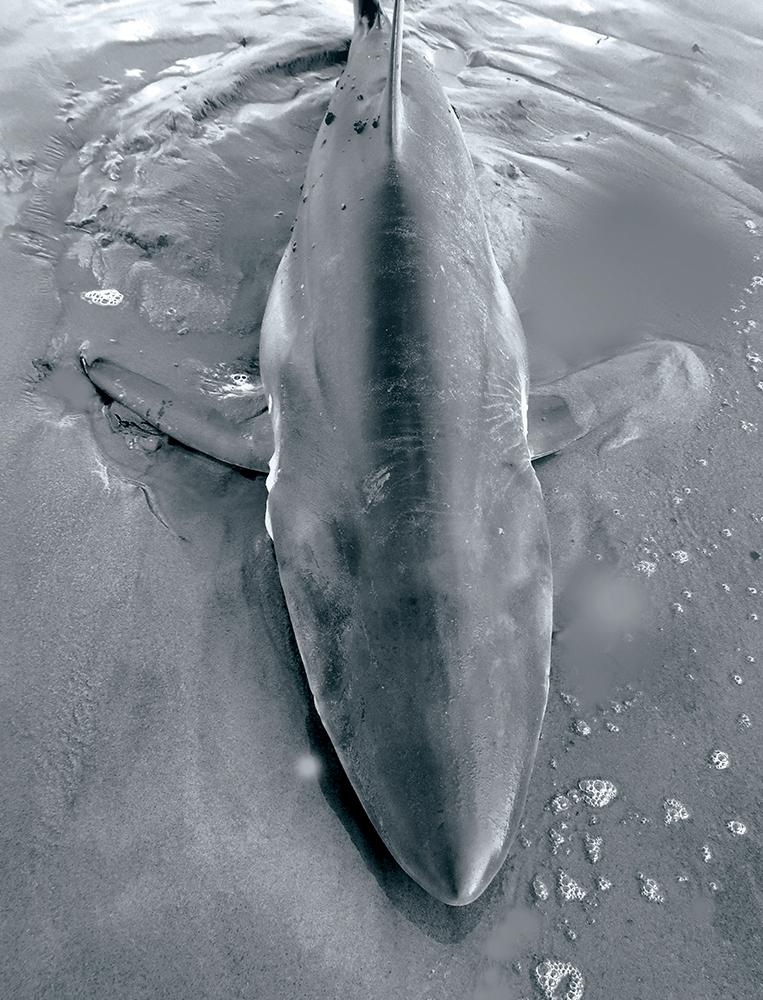 The spinner shark has a long, pointed snout; blacktip is shorter and more rounded.

Those of us who love fishing for sharks in Texas can count our blessings. Though we typically don't experience ideal conditions on a daily basis like our Florida counterparts do, we certainly have a productive fishery. Over a dozen shark species can be caught from the Texas surf, ranging in size from frisky and small to monstrously large. I've been lucky enough to land 13 species of the toothy critters from Texas' beaches and been present while others landed additional rarities.

Out of all these, one species here in Texas stands alone as the most abundant, most frequently encountered shark of the surf—the blacktip shark. These are acrobatic, medium-sized sharks which max out at around 100 pounds. When hooked, they often leap into the air, spinning radically. When beginners and novice anglers see this, their first thought typically is, “That's a spinner shark!"

Spinner and blacktip sharks are separate species, both of which occur in our waters, the blacktips far more abundant, spinners less common. Most of the breaching, leaping sharks fought in Texas are blacktips, not spinners. Labeling blacktips as spinners and vice versa ranks at the top of biggest identification mistakes made by anglers who target sharks.

All over the United States and beyond, people regularly mistake blacktips for spinners. Certainly, this is true in both Texas, and in what I like to call the “over glorified” Florida waters. In fact, some academic references name the blacktip the “lesser blacktip shark” and the spinner the “greater blacktip shark,” probably because the markings on the two species look so similar. Their flank patterns and coloration are nearly identical. Their size averages quite close as well, and the behavior of one is also basically a carbon-copy of the other, so it's easy for newbies to confuse these two.

Though spinners and blacktips share some similar traits, each species shows some unique features. Three main physical features aid in definitively identifying blacktip and spinner sharks. First, spinner sharks have a much smaller dorsal fin—almost 30% smaller. Their smaller dorsal fins help spinners move hydro-dynamically, with faster forward speed bursts, but provide less balance and turning power than larger dorsal fins. Sometimes, this feature alone allows for positive identification of an individual specimen. An angler reeling a spinner in from the beach who gets a glimpse of its dorsal fin and thinks they've hooked a really small shark, only to beach it and realize it's much bigger than anticipated, has received a useful clue.

The creature's head provides a second helpful physical trait to use when trying to distinguish the difference between these two sharks. Overall, spinners have longer, more slender bodies. At full maturity, they average about a foot longer than blacktips. Spinners well over eight feet long have been documented around the globe. The snouts of spinners perfectly match their long, slim bodies, looking more pointed and extending further out than those of blacktips. Additionally, spinners have slightly smaller eyes than blacktips; the difference is slight, but discernible.

Behavior patterns also help distinguish the two species. Spinners are opportunistic feeders. At times, people see huge congregations of the species, either during mating season or when they're in a feeding frenzy. Here in Texas, the majority of our spinners will be encountered in late spring and early fall. They show a liking for small baitfish like menhaden and anchovies, which form tight schools, or balls, sometimes measuring in acres, in the surf. When such schools form, hundreds of spinners may lurk close by. From the kayak, I've seen enough circling a bait ball to send shivers down my spine!

Spinners spend more time offshore than they do in the surf zone. Offshore anglers regularly encounter spinners scavenging behind culling shrimp boats. This fits into the opportunistic methods of the species; they seem intent on getting fed without working too hard. As shrimpers shovel countless pounds of by-catch into the water, swarms of spinners often swim in the depths, gulping down easy meals.

We sometimes encounter spinners during offshore mako adventures in winter. Where sandbar and/or mako sharks swim in Texas' offshore waters, spinners likely also gather. One of the most incredible experiences I've had occurred when I hooked a spinner nearly eight feet long, while fishing for grouper. When I got the shark up close to the boat, I noticed a giant silhouette underneath it—a mega mako. The spinner dove down deep, and the mako followed. When I succeeded in wrestling the spinner back to the surface, I saw dagger like marks on its side, mind blowing proof of nature's savage way, left by the teeth of the attacking mako.

This year has proved to be a good one for spinners in the Texas surf. Some years they run; some years they don't. Quite a few quality specimens have been landed recently in our state. One of the more curious anomalies is the high number of spinner pups running rampart in the waves along the beach. This year, more than any other I've experienced, we have a copious amount of small spinners in the two to three-foot range. For weeks straight, we were catching them cast after cast, on small baits. Does this have anything to do with enhanced nursery habitat provided by all the freshwater in the surf? It's tough to be certain.

The good news is the numbers of reproducing spinners seems high and viable for a stable fishery, one on the rebound. Spinners, like all other sharks, play important roles in our marine ecosystem. The balance of nature depends on them, so catch and release is highly encouraged. Any angler who hooks an acrobatic shark on a beachfront excursion will likely find the thrill to be real, whether the flying critter turns out to be a common blacktip or a member of the less abundant species, a truly legit spinner.

Spinner Sharks and Blacktips Are Similar; Here’s How to ID