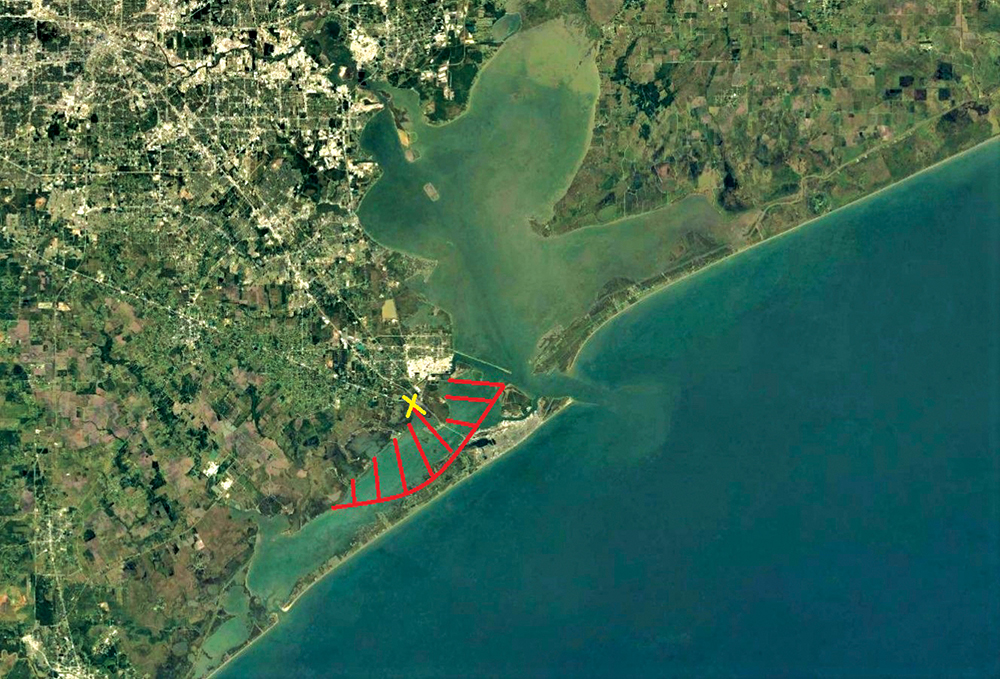 As a fishing guide, I operate in some unusual ways. For one thing, I regularly fish with customers in their boats, with the express purpose of helping them improve their decision making and physical application skills. After doing this for years, I've identified two choices made by many boat owners which limit productivity in the most basic ways.

I became aware of the more obvious of these two decisions (and its consequences) while making my home in Hitchcock, along a canal in Bayou Vista, on the marsh side of Jones Lake. While I lived there from 1993 through 2001, many residents chose to construct boat houses along their bulkheads, so they could keep their skiffs ready for almost instant deployment on the water. At the time, the going rate for a covered boathouse ran about $10,000, so I couldn't afford one.

About the time the roofers nailed down the last shingle on the first house, I began to believe people who had paid for the convenience of having a sling on the bulkhead should have spent their money on other things. I heard complaints about the hassles and high costs associated with purchasing fuel on the water. More importantly,  I learned anglers who had chosen to hang their boats out back spent most of their time fishing within eyesight of the neighborhood.  All boats have a finite range, dictated by the amount of fuel they carry, but more importantly, human nature prevents most captains from pushing their boats to the limit every time out.

Folks who embark from a canal which connects them directly to Highland Bayou and Jones Lake spend most of their time fishing in the shallow bodies of water close to home. Some venture across West Galveston Bay to fish its south shoreline, or around Virginia Point to fish Campbell's Bayou, maybe on a wild hair head all the way down the ICW to check out San Luis Pass. Most spend virtually all their fishing time in Jones Lake, Green's Lake, and the waters near Mecom's and Green's cuts. As long as the boat hangs out back, few will ever set foot or pull a drift in East or Trinity Bay again, at least not at the helms of their own hulls.

Limiting the location of the fishing efforts generally reduces the productivity of these anglers, compared with the potential they might realize if they remained mobile by keeping their boats on trailers. This truth stems from a basic fact about the optimal ways anglers select places in which to make their efforts. I place strong faith in a relatively simple concept related to fish location skills—the angler with the most extensive knowledge of the bodies of water will achieve the highest level of productivity. One of the keys to consistent productivity involves the captain's ability to identify which parts of the local waterways offer the best potential for catching as the seasons, weather and other environmental conditions change.

Consistency depends concurrently on both the angler's ability to identify productive places and eliminate unproductive ones. People with more knowledge of the entire area make better choices than those with a less thorough grasp of the features of all the local waters. Ideally, an angler chooses to fish most often in a place best suited to the conditions when they run favorable, or the one least negatively affected by them when they run counter to our efforts.

In order to do so, captains must appreciate how wind and other aspects of the weather either elevate or diminish the potential in all local areas. When primo conditions prevail, captains can expect to catch fish wherever they choose, but when strongly negative conditions affect much of the area, small pockets in remote portions of the bays often offer much better potential than the main basins. In many cases, these nooks and crannies lie outside the range of captains who choose to dangle their boats on slings in the back yard.

This causes two related problems for anglers who lack the desire or ability to access all the far-flung parts of the bays in which they operate. They sometimes choose not to fish at all, knowing the weather has trashed the potential in all their familiar spots close to home. At other times, they stubbornly venture out anyway, hoping against the odds for an outcome they know won't likely occur, winding up disappointed more often than not. Either way, these captains can't possibly hope to achieve the same level of long-term productivity as those who trailer their boats away from the house to launch them in places where they can more easily access the parts of the bays offering the best potential in the constantly morphing situation.

People can find ways to push back against the limitations inherently created by the choice to keep the boat in a hangar on the bulkhead. Some might choose to carry extra gas in plastic cans to increase the range of the boat, allowing them to make longer runs to access places farther from home. Many folks who stay in cabins in and around Baffin Bay and the Land Cut do this on a regular basis, so they can spend multiple days on the water. Many folks find this practice tedious and abandon it soon after trying it.

Pouring gas from a heavy container into a funnel proves problematic at times, especially when the need arises while the boat bobs about on tall waves in strong winds. Extra gas cans take up space on the deck of the boat; dirty funnels create a mess in the hatches. Other choices might make more sense for more people.

One way to fight against the limitation of the scope of efforts caused by hanging the boat in the yard is to choose to put the boat on a trailer at the beginning of a busy streak of fishing.  When on vacation, or when a stretch of benign weather approaches, even when reliable reports indicate prime potential in a distant part of the area, savvy anglers could do this to maximize productivity. Putting the boat on the trailer will allow them to temporarily remain mobile in their choices and expand the area they can reach. In most parts of the state, multiple boat ramps lie in relatively close range of all parts of the local waterways, and for people who want to fish Trinity Bay, launching in San Leon, Baytown or Anahuac makes more sense than launching in Bayou Vista.

Trailering the boat several times throughout the year also provides an indirect advantage over not doing so. Like bird dogs and pickup trucks, trailers need some work in order to stay in good shape. Left idle beside the house for too long, they develop problems related to lack of use. When used regularly and treated properly, trailers last longer and will likely stand ready for use when the need arises to take the outboard to the shop for maintenance or repairs.  This fact alone justifies the idea of regularly putting the boat on the trailer and taking to the road to fish farther from the house.

Of course, some will point out the advantage of fishing a smaller area all or almost all the time. Anglers who stay in a limited part of the local waterways have a better chance to achieve more intimate knowledge of the place, especially how various conditions impact productivity in its different parts. Consequently, captains who choose to hang their boats in a slip should make every effort to learn all they can about every single nook and cranny of the waters within their easy reach.

In order to achieve this goal, these captains should do an honest assessment of the parts of the area where they have weak knowledge, and consciously seek to learn productive spots within them, in various conditions. This means heading to unfamiliar places with a purpose and a plan, and documenting results over time. Using Google Earth to gain a basic grasp of the metaphorical anatomy of the weak areas provides an excellent starting point.

Satellite images serve a more productive purpose in some places than others; the eyes in the sky see the bottom better in bodies of water which run clear more of the time.  Clear water allows for better perception of structural and cover elements and the depth of the water, all of which help the angler make predictions about which spots provide the ripest potential.  Old school fishing charts also provide clues which can help studious anglers make solid plans to enhance their knowledge of new areas.  After using such resources to identify potentially productive spots, anglers should venture to them and put them to the test.

In this way, anglers who have chosen to limit the scope of their efforts by hanging the boat in a sling for convenience can offset the inherent loss of productivity somewhat. For many folks, the die has been cast; the boat hangs out back today, and it always will. I readily admit none of this matters much to some folks, specifically those who have scant interest in working harder to increase productivity. They see fishing as more of a leisure activity than a sport or art. Certainly, limiting the scope of effort for the sake of comfort makes perfect sense to them.

But folks who perceive maximizing productivity as a critical component in the enjoyment of the sport can fight back against the limitation in the ways described above.  The next step in the process, specifically for those who prefer wading over fishing from the boat, starts with recognizing how another choice limits the scope of effective efforts and adjusting methods to properly reduce its effects.  That issue will serve as the source of Part 2 in this series.