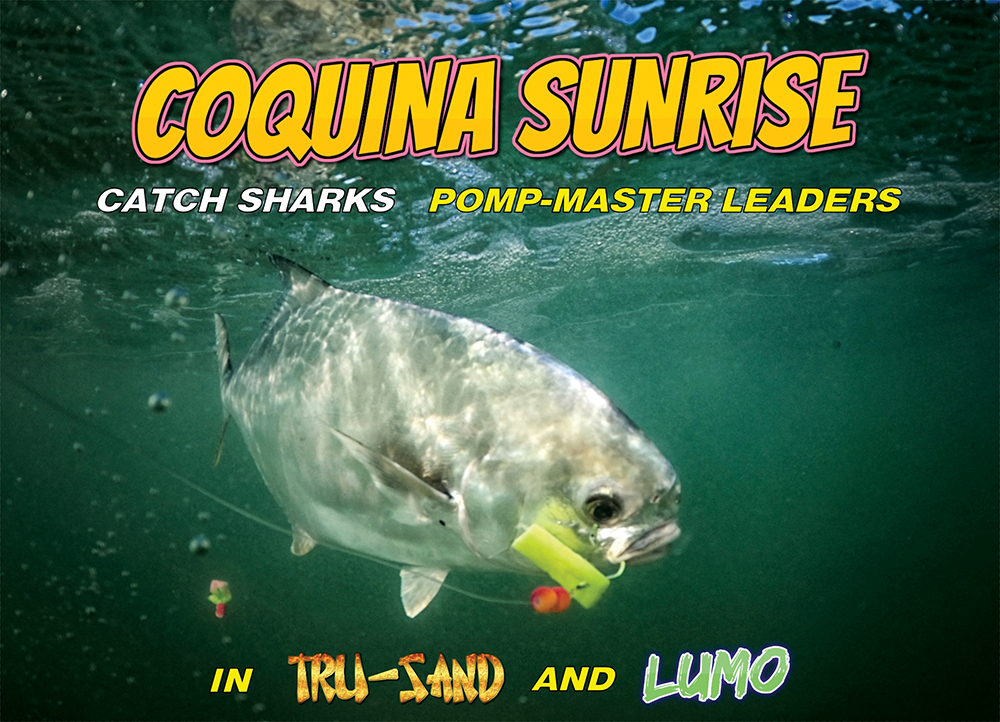 Our Coquina Sunrise pompano leaders have been doing great work on pomps, and even a few redfish and black drum.

Many different species of fish inhabit our coastal waters, keeping us entertained as the seasons come and go.  Some anglers prefer to target trophies, while others feel content catching whatever will bite, putting a priority on harvesting healthy table fare for their families.  In winter, Florida pompano become a prized catch for many anglers along the Texas beachfront.

Despite the reference to the Sunshine State in their name, Florida pompano are common in Texas waters.  They typically move into the shallows in great numbers during the cold months, but are present and caught throughout the year.   Their shortened snouts, forked tails and silvery white sides above yellow underparts make them easy to identify.

Similar to palometa and permit, pompano are far more numerous than either of those species.  Due to the healthy state of the fishery in our part of the Gulf, no regulations limit the harvest of these prolific fish.  Anglers can take advantage of this to stock up for the year during the annual run.  When the pomps raid our beachfront waters to gorge on small crustaceans and coquina clams, they become easy targets.

Averaging about three pounds, the species ranks high on the list of favorites in the surf.  So far this winter, the pompano bite has been outstanding, one of the most productive in a long time, and the run continues to this day.  Many of us welcomed this great blessing at the end of such a chaotic and abnormal surf-fishing year in the Lone Star State.

Since the catastrophic freeze back in February of '21, the rhythms which define the surf fishery have fallen out of sync.  Timing has been way off; some expected migrations never materialized.  Then, extremely warm water temperatures prevailed until late in the year, so it's a mystery why this species has been so prolific this season.  Theories abound to explain why the pompano bite has been so stellar recently.

The abundance of coquina clams in the surf might provide the most logical explanation for the big numbers of pomps coming to the hands of coastal anglers this year.  Maybe the invasion of smooth pufferfish in the fall pushed out other fish that would normally eat the clams.  Pompano favor coquina clams and ghost shrimp as food sources, as do black drum and whiting, when in the surf.  When a prey species proves abundant and readily accessible, predators come out in full force to gorge on them.

In clear or green water, Florida pompano flourish, because they find their food easily, by sight.  So, catching plenty of them normally means fishing for them in pretty water.  Harvesting good numbers of pompano is not necessarily a high art form, but a few things enhance the chances for productivity.  First and foremost, anglers should search for an optimal location to make their efforts.

Much of the time, schools of pompano inhabit the deeper guts fronting the beach.  Most notably, they seem to prefer the second gut, when good depths separate the two shallow bars defining it.  Most pompano enthusiasts insist on setting up in a location where the first bar lies relatively close to the beach, so they can cast beyond it without having to wade far from the sand.  Some people prefer wide guts, while others prefer narrow, deeper ones.  Basically, as long as the spot allows for casting baits beyond the bar and into the depths, success likely follows.  Savvy pomp hunters accomplish this by using long, light-weight surf rods to sling the small payloads as far as possible from shore.

Many different types of terminal rigs work well to catch pompano.  Some people make their own, but the market includes many built from generic hardware.  Conventional wisdom says pompano like bright colors, and I agree, but some of the pre-fabricated rigs include so much bling they look like honorary hippy necklaces.  Offering plenty of flash without crossing the line into the realm of the absurd provides the key to creating the best rig to use when targeting these fish.

After countless hours of testing in the field, I feel I have figured out the optimal design for a  pompano leader and have appropriately named these rigs the Coquina Sunrise Pomp-master leaders.  I developed this ultra-simplistic, highly effective rig strictly for pompano, but I've caught lots of redfish and black drum on it too.

The Coquina Sunrise rigs have double drops and come in two variants.  One offers my acclaimed Tru-sand coating to blend the hooks with the surf bottom, and the other has Lumo chartreuse hooks for added visual appeal.  The only other visual aid I add are double-gradient Coquina Sunrise beads, two per hook-drop.  With anti-slip mechanics, these two small beads hug right up against the hooks.  I don't include any unnecessary floating mechanisms; as designed, these leaders create the perfect presentation of baits to passing pompano.

Look for these leaders on the Catchsharks.com website.  I've had several trips using them, with astonishing results.  The catch rates of high-priced, ultra bling leaders cast alongside them just could not compete.  One day, I caught 40 consecutive pompano on a single Coquina Sunrise leader before catching another species on it.

Another trick further enhances the productivity of these rigs.  While many folks use shrimp or a shrimp/Fish-bite combo, I deploy Fish-bites exclusively.  I utilize bright colors like yellow or pink and cut them into diamond shapes, roughly three-quarters to one inch long, to mimic the natural look of a coquina clam.  Often, I double the Fish-bites for a thicker, more lifelike look.  Using this technique yields  impressive results when appropriate conditions prevail, as they often have this winter.

Highly sought and desired, the flesh of Florida pompano ranks as arguably the tastiest in the ocean.  Accordingly, pompano fetch high prices in commercial markets; cooked just about any way, they turn out well.  Here in Texas, a trend of smoking the fillets has become popular.  The smoked fillets can be eaten alone, or utilized to create pompano dip, which explodes with amazing flavors.  Vacuum sealing several smoked fillets at a time allows for using them as needed, without further preparation.

This adds appeal to fishermen looking to stock up on fish when the opportunity presents itself.  But as with any fish, no matter how useful in culinary classics, we should catch and keep what we can utilize, and release the rest.  We currently have a healthy stock of the delectable Florida pompano, and as long as we respect the resource, we’ll have plenty around for a long time to come.