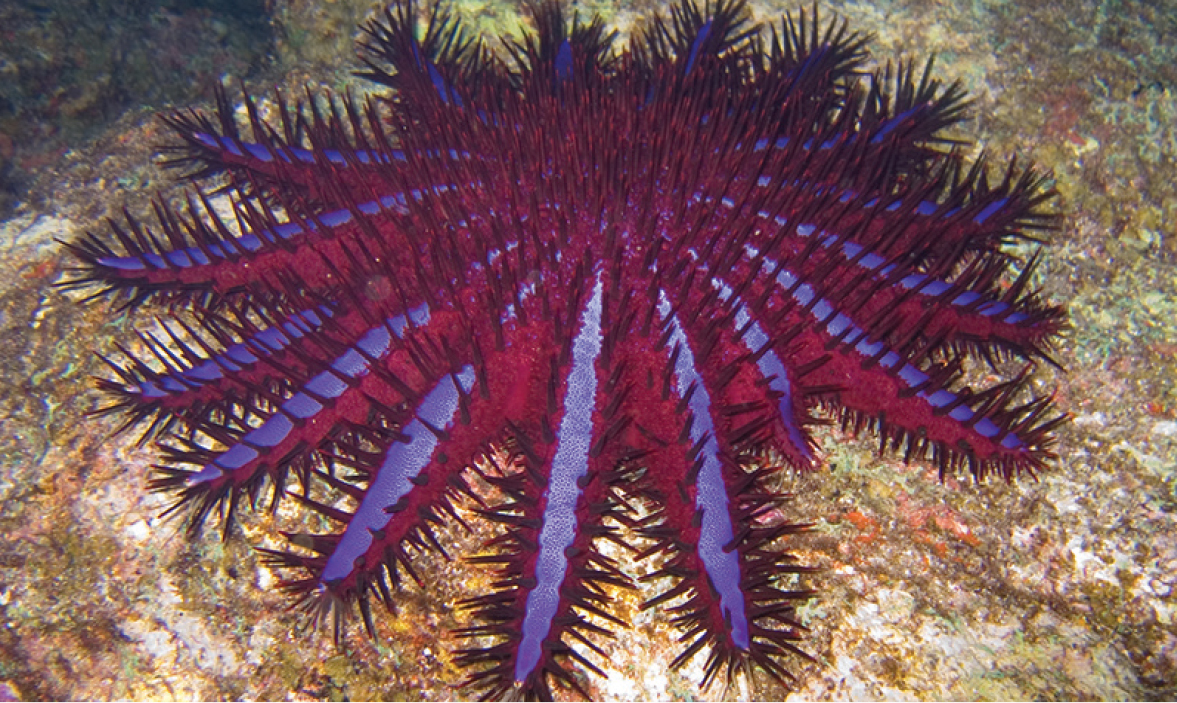 Crown of thorns sea stars eat coral and often devastate reefs. Credit: Jon Hanson, Wikipedia, CC-BY-SA-2.0
Crown of thorns sea stars are dangerous predators on coral reefs. The sea stars are intimidating creatures that can grow to nearly a foot and a half across. Their multiple arms—up to 21 on a single individual—are covered in long, toxin-tipped spines, and they feed on coral. They can devastate entire reefs. One of the sea stars’ primary natural predators, the giant triton snail, is a threatened species, so it has been unable to prevent the crown of thorns from taking over massive coral reef regions in the Pacific Ocean.

But it turns out, coral isn’t as helpless as scientists previously thought when it comes to defending itself against the crown of thorns. Young crown of thorns sea stars feed primarily on algae and then switch to feeding on coral as they grow into adults. During this transition, stinging cells on coral’s tentacles and outer tissue can damage the delicate tube feet the sea stars use to move across the coral.

Scientists have been able to catch this interaction on video. They watched the juvenile sea star curl back its arm to avoid the coral’s sting. Repeated damage to its arms can stunt the sea star’s growth and reduce the arm’s length by up to 83 percent. More than a third of the 37 sea stars studied by Australian biologists sustained injuries. Most of them survived and regenerated the missing or damaged arms within a few months, but 11 percent of the young sea stars studied died.

It’s good news that corals can fight back at least a little against these ruinous sea stars. But scientists also know these defenses aren’t enough to save coral when it still faces threats from global rises in temperature, acidification of seawater, fishing and pollution.