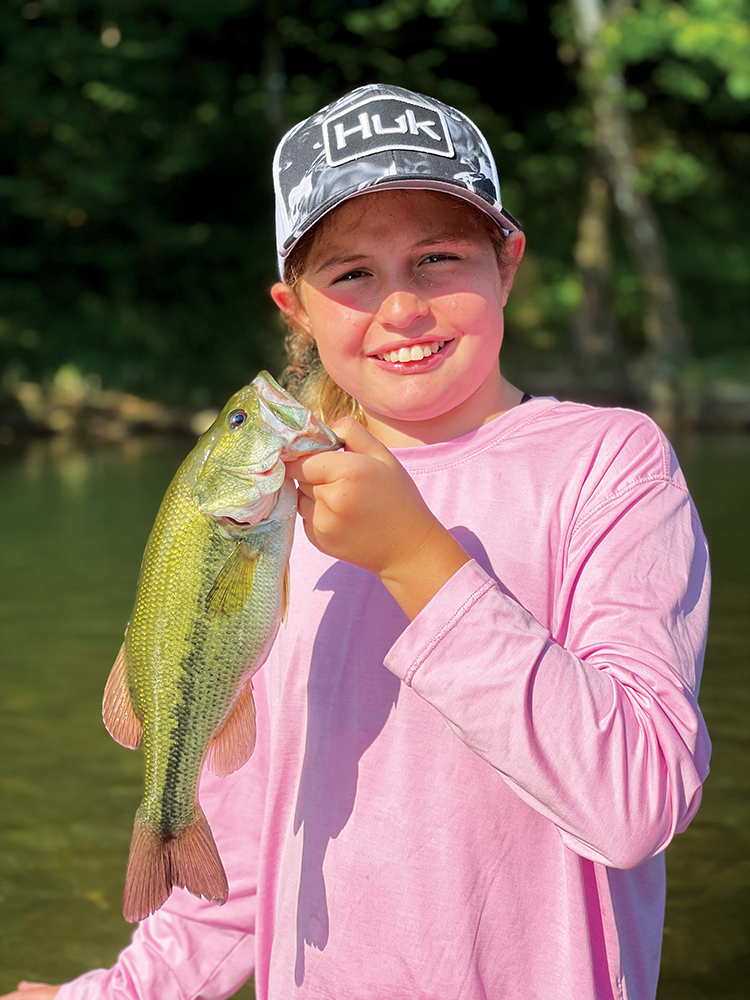 Briley Burtsfield was a quick study with spinning tackle.

Perhaps one of the greatest gifts one could ever share is time and knowledge, while the greatest reward is seeing the things you share being put into use by the next generation. I have been fortunate to have seen many young anglers and outdoors enthusiasts get their start and, at this point in my life, I truly enjoy seeing those younger than myself flourish in these areas.

One such group of young anglers has stepped to the forefront for the good of all those around them and for the good of the sport they love. The “Islanders” from Texas A&M Corpus Christi’s fishing club got together with Dr. Matthew Streich (PhD Assistant Research Scientist) in their free time and started up their own fish tagging program. Over the last year or so I have been fortunate to be able to spend some time with several of these young anglers, all I can say is they are top notch in every aspect and are exactly what the fishing community needs.

Three of the “Islanders” who are engaged heavily in this program are Carlin Leavelle, Parker Shelly, and Liam Qureshi. All three of these young men are very accomplished anglers and can catch fish with the best of them, which is exactly why they are so valuable to this project. “The whole idea started because of a video we watched of Capt. Wayne Davis (Lower Laguna Madre fishing guide and writer with TSFMag) tagging a speckled trout and saying it was for the Harte Research Institute. As soon as we saw the video we knew this was something we needed to be a part of,” said Leavelle, who is a senior student at TAMU Corpus Christi. “Once the decision was made to get involved with the program the Islander Fishing Club paid for the tag applicators and tags to kick start the project,” he added.

“The goal of the tagging program was a collaboration between the Islander Anglers and the Harte Research Institute, to assist in growing their tagged fish database as well as involving students from the university in preservation and research efforts for the fish they love,” said Parker Shelly, who is a junior at TAMU-CC. Shelly went on to say “The tags we use are all “recapture” tags, which means an angler will tag a fish they catch, take note of length, weight, location, and tag number, with hopes of the fish being caught again at a later date. Once that fish is caught again the new length, weight, and location info can be updated in to enable scientists monitor growth rates and potential travel or migration patterns.”

Also a junior, Liam Qureshi told me that thus far the Islander Anglers have tagged several other species of fish to go along with the speckled trout. “To this point we have tagged speckled trout, snook, flounder and kingfish. Each species has a minimum size in order to be tagged, for example all our speckled trout must be at least 25” long and weigh at least five pounds. Since we started the program in April of 2021, and tagged our first fish on April 20, the majority of the fish we have tagged have all come from the Upper Laguna Madre region. We hope to continue to expand our program and the areas where we tag fish in the future.”

Programs like the one started by these young anglers will do nothing but help the fishing community in the future and I applaud each of the members of the Islander Fishing Club as well as Dr. Streich for assisting them in this endeavor. To see this level of involvement and interest from young anglers is amazing and a welcome breath of fresh air, especially after the set of circumstances brought to that area by the fish killing freeze this past February. Conservation knows no age and the members of the Islander Fishing Club are proof of that.

Speaking of young anglers, I recently spent a couple of mornings on a river in southwest Arkansas giving lessons to several youngsters who wanted to learn a little more about the sport of fishing. Several times a year my family and I frequent this river and I have grown increasingly fond of catching smallmouth bass each time I go. On my most recent trip I had a couple of kids who had been watching me catch fish start asking questions and expressing interest in catching some on their own. I happily obliged to share a few tips and a lesson or two. My preferred tackle, for not only this situation but for most involving kids is a spinning reel, rather the old push-button spincast reels that so many parents provide them. The spinning reel offers a much better platform to both learn from and fish from for several reasons when it comes to new anglers. First off, spinning reels have much better drag systems and much better line capacity, which is a big plus the first time a healthy fish decides to take off. The spinning rod and reel are much more user-friendly and will translate well going forward for any angler.

My young friends on the river took to the spinning set up quickly and in no time were catching fish with the best of them. As we walked down the river and waded into the gin clear water I took the time to point out things that would be beneficial to them later. Things like how to read the water and where the fish might stage while waiting for their next meal to appear. It was lots of fun watching these youngsters enjoying success and becoming excited about the sport of fishing. Opportunities like these are great for everyone involved because it offers a chance to get back that feeling you had as a kid and share it with another. I can’t get enough when it happens.

Easily the star of the riverbank on this trip was my niece Briley Burtsfield, she picked up the technique quickly and in no time was casting like a pro. One observation I have made over the years is how well most of the female anglers take direction, they are usually much more coachable than us guys because they listen better and have such great feel for technique. Briley managed to pick up several fish on our little stretch of river including a very solid largemouth bass to go along with some respectable smallmouths. I can say it with all honesty, coaching someone to catch a fish is often better than catching it yourself, especially when it involves young anglers.

Take the opportunity to invest a little time in a young or inexperienced angler because the reward is much greater than you could imagine, and that makes fishing’s future brighter for us all.

Lure Choices for Trout and Reds Along Jetty Rocks