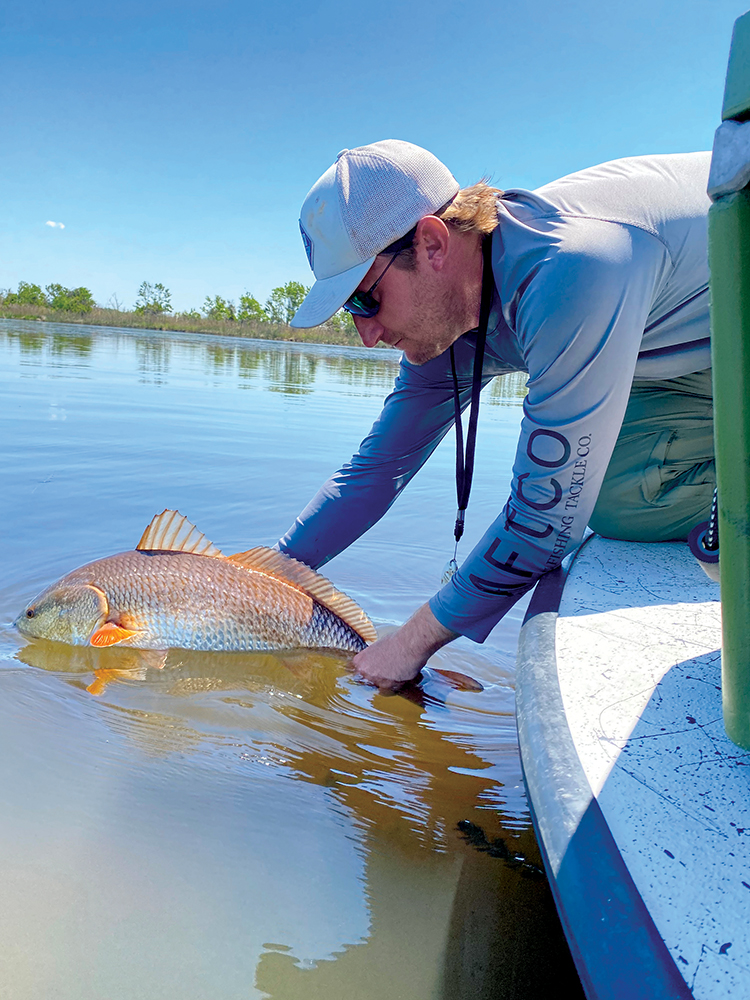 I believe I can speak for all Texans when I say we are tired of the rain. This summer has certainly been one to remember, and not necessarily in the best of ways. It seems that every day for the past two months brought rain somewhere along our coast, sometimes several days in a row. The only thing that likes this amount of rain is the grass in our yards and mosquitoes. However when it comes to chasing fish in the marsh, if there is any merit, I have been forced to learn new fishing strategies.

It’s no secret that fisherman dread rainy days, especially when they fall in succession. When a substantial amount of freshwater comes rolling down the rivers and into our bays and estuaries, it tends to change the fishing patterns. It typically is nothing major but it is definitely enough to shift the fish around and make it a little more challenging to pinpoint them.

One of the major lessons I have learned throughout this rainy summer is that you have to stay near deeper water or channels. I have found that tidal flow is the key to making an area more productive than others. With the access of deeper water and stronger tide flows nearby, it allows water with a higher salinity level into the marsh. Even though the water may still be rather fresh, a little bit of salt will go a long ways when it comes to holding fish.

Another lesson I have learned when it comes to rainy conditions is to avoid going too deep into the marsh. It has taken me a few years to put this piece of the puzzle together but I am certain of it now. The reason why I don’t like going to the remotest and most secluded ponds is because I believe that the water generally has less oxygen and nutrients in it. I think what happens is the rain water filters through our marsh grass and takes some of the soil with it. Once it drains into the ponds, that water is tainted and the redfish know that and leave. The first time I ever saw this was several years back and I was on my kayak with a redfish on the stringer. She swam around with me all day and was healthy as can be until I got further back. I hit a pond that I could tell had a slightly different water clarity and an odd smell to it; not two minutes later my fish was dead; killed it instantly.

For a while I would go to the marsh and never catch or see any fish and I would blame it on the water level. Thinking to myself, the water is so high they could be anywhere, and that’s why I’m not seeing or catching anything. The reality of the situation was that they had left days prior to my arrival. As far as my tainted water theory, I cannot speak for the middle and lower coast but I know for a fact that it happens on the upper coast. I know that sand is a much better filter than marsh mud so this may not occur further south.

So, since taking into consideration these two factors I have had much better luck putting a pattern on fish in the marsh. Typically I do not pay much attention to the tides when I hit the marsh but after several days of rain, I now study it religiously. I have found that it is much better to fish on an incoming tide as this is the best chance to bring in water with greater salinity, even if only slightly saltier. The other is fishing the primary or secondary ponds fed by a channel or slough. This, I believe, allows fish to easily get into the marsh to feed with less risk of getting into the tainted (lower salinity) water that lies further back. And, after they are done feeding, they can make a short retreat back to the refuge of deeper and saltier water.

Here recently I have had a chance to hit the marsh and put my theory to the test. Several buddies and I loaded up and went to go see what we could find. We arrived to the first pond just after the incoming tide began and we were pleased to find plenty of fish hanging around the edge of the flowing water. I stuck the Power Pole and we began fanning casts with She Dogs across the flat and…it was on! We caught and released several mid-slot reds on topwaters and when that bite dwindled, we switched to spoons and swimbaits. Finding the bite again we finished the morning and decided to call it early before it got too hot.

Even though we had a fun time, it took me several long slow days to figure it all out. Time on the water is the most valuable and rewarding way to gain knowledge. Changing conditions will always make fishing tough but once you figure it out, you know exactly what to do and where to go in the future. That being said, don’t let a few rainy days or excessive freshwater scare you off. The fish might have moved but they likely didn’t go far!


Tips for Fishing the Jetties