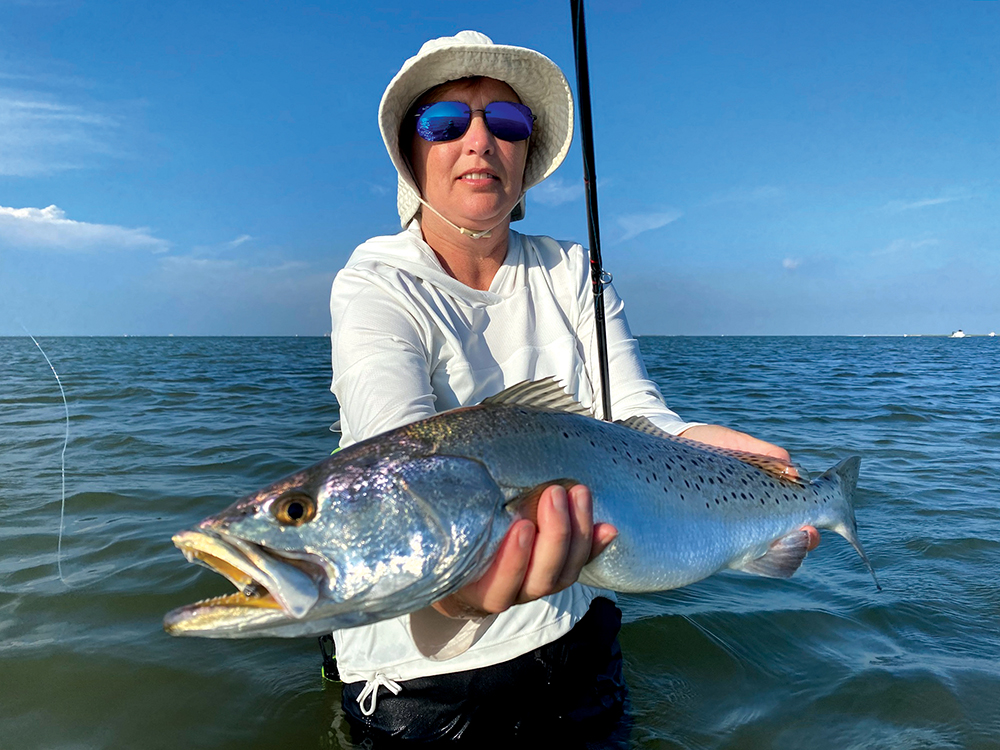 Summer heat has arrived and Rockport water temperatures already above 85° are living proof. Afternoon surface temps are bumping 89° in the shallows. Water temperatures this high will most often push bait and game fish alike to the nearest drop-off. Understand that the word drop-off does not always mean deep as many of our drop-offs along the edges of large grass flats are only a foot or so deeper than the flat itself. Finding large numbers of redfish and black drum becomes more predictable when water temperatures are aiding in concentrating them. Add a mid-afternoon falling tide and locating good numbers of reds and drum can nearly become a gimme. The heat can be even tougher on anglers so be sure to stay hydrated and wear protective clothing to protect your head, neck, arms and hands. I talk a good game but the sun is brutal and has definitely taken its toll on my skin.

I am excited to talk to you today about some of the trout we are catching and explain how and where we are doing so. First, I want to say that my trout fishing is much tougher than 2020. I have 1 or 2 days a week when I struggle if conditions force me to abandon areas where I have quality trout located. Our trout are still moving more than normal and I feel this also increases the percentage of misses. I saw similar inconsistencies in ‘83 and ‘89 but they were even greater then.

A quick side note: I had a guy ask me if I had actually documented those events when I was that young. I did not hesitate in saying that I absolutely did and that is the only way I have to measure what I am seeing now. I have always been that angler who wanted to know WHY I caught what I caught. WHERE I caught them. WHEN I caught them. And, of course, HOW I caught them.

I honestly wish I were one of those lucky fishermen who just seem to fall into them but I have never really considered myself lucky in that way. I have always had to work to catch them and maybe that was actually an advantage. I believe we learn more and we learn faster when we have to work at something.

On the days when we struggle it seems you can feel it coming from the start. Bait presence is diminished and signs of activity are fewer. There are plenty of signs to get me to punch the Power Poles but nothing in particular just jumps out at you. With the super-heated water and summer crowds it is important to sit down right on top of them whenever you can. Many days that first hour in the morning produces half or more of the day’s catch.

Lloyd Lassiter, one of Rockport’s best guides, used to tell his clients that it was a fish a minute during summer’s hottest times. I tend to agree with the captain on this one, especially this year. All that said, my point is that once I am in an area where I previously found good fish, and I see at least some of the signs I feel I need to see, it’s hard to pass without fishing. Quite often though, it doesn’t take long to get the feeling that it just isn’t going to happen in that spot that day.

The problem is that we are there and we are chasing the bite rather than allowing the bite to develop around us. This leads to tougher days and most all the time that is on me. In the best of times we can still scratch out six or eight fish in such areas but too often this year this has not been the case. Ok, it’s a given that we are going to experience tough days this year and you get that. Let’s move on.

On those days when everything looks right and turns out right, bites come much earlier during the first wade of the morning and I am seeing constant slicking as we are fishing. Early morning slicks have been the key to the larger fish that I have been catching. These are shallow shoreline platter-sized slicks and the action sometimes ends almost as quickly as it starts. More times than not these slicks are coming from the fish we want a chance at catching. For the most part the numbers are much smaller and true patience and a conscious effort is required in the patterning process. You must allow the pattern to develop and allow them to show themselves, which they will do if you don’t push them. We have to stay off the area were the fish have become comfortable. Slow wades, parallel to the activity, casting at angles that allow the wind to bend the line during the retrieve is a must.

I like at least thirty-six inches of clear mono or fluorocarbon leader in the clear, shallow stuff. Long casts that land as quietly as possible along with a big dose of confidence that I can get these girls to eat are essential. It’s been early when we have seen these fish and caught a few of them. Now the real beauty to this article is the next pattern I am going to share.

As the sun warms the water and light penetrates the clear, shallow water, the water temperatures begin to rise rapidly. The combination of super-heated surface water and the light penetration drives these fish deep, right? Well, not so fast.

One of the biggest obstacles we face today, that we did not have nearly as much of in ‘83 or ’89, is dolphins. I cannot recall or did not notice them hawking fishermen back then like I do today. These guys are eating machines and super smart on top of that.  This year with decreased numbers of baitfish and trout, these apex predators have been brutal. I just leave when they start acting like they are going to start eating fish off our lines. Some areas are worse due to fishing pressure and many anglers that get enjoyment from feeding them small trout or croaker. I say make them work like all the rest of us to get a meal. If you think I am suggesting leaving the bite you’d be right.

So with all that put into play, the larger trout are now holding on shallower underwater grass edges and submerged grassy points. They are sticking right to the grass, even in it. I believe that when the trout are close to or in the grass and not moving it is much harder for the dolphin to locate them. Out deeper the dolphins herd them and slap the surface of the water hoping to make them move so they can zero in.

What we did the past couple of weeks was target these areas specifically after the early morning slicking had ceased. I found that by getting my anglers positioned properly we could all cast to slightly different areas where submerged grass edges and submerged grass points had formed. We had zero slicking during these periods but when we stuck a fish and she came to the surface and shook her head, a slick formed about 90 percent of the time. I believe these are the same fish that were feeding up shallow earlier. On the mornings where my clients could see the edges and points for themselves it was money and provided the best trout action I have seen since the freeze. On overcast days I have to quietly evaluate each angler’s casting abilities and arrange them on the proper line. Coaching the unseen is more difficult for sure but if anglers will listen and trust me, it works.

Another pattern we discovered was how the trout picked up the lure either in the grass or just as the lure was coming in contact with the grass. My video this month includes a discussion of this very topic. You can also view it on Instagram at jaywatkinsfishing.

I noticed my anglers were missing lots of takes. I use the word take rather than strike as they were very light and not really a strike in the classic sense. The take is a slight tick on the line and then it just loads the rod a little. The trout were pushing straight to us and if they jerked to set the hook the fish felt it and came up spitting the hook. I instructed them to reel down to the fish. Just crank down and keep reeling until you feel the weight of the fish as she turns left or right and then set the hook. This prevents the fish from being telegraphed by a sharp hookset when the line and rod are not properly loaded, which almost always results in a miss. When this technique is applied properly the fish will be hooked in the hinge of their jaw where we can then apply the pressure required to land larger fish.

It was amazing the numbers of fish my groups caught by switching to this method of setting the hook. We caught big numbers of trout to twenty-six inches while targeting the submerged grass edges and submerged grass points. Many times each day we could literally call the shot as we approached a likely looking edge or point.

It’s the brain game or fishing smart, as me and my boys would say, that will make or break you during a year like this one. No matter how few fish there may be, the best of the best will consistently figure out what it takes to catch them. This is not the year to follow the crowd. Venture out on your own and let your fishing skills point you in the proper direction.