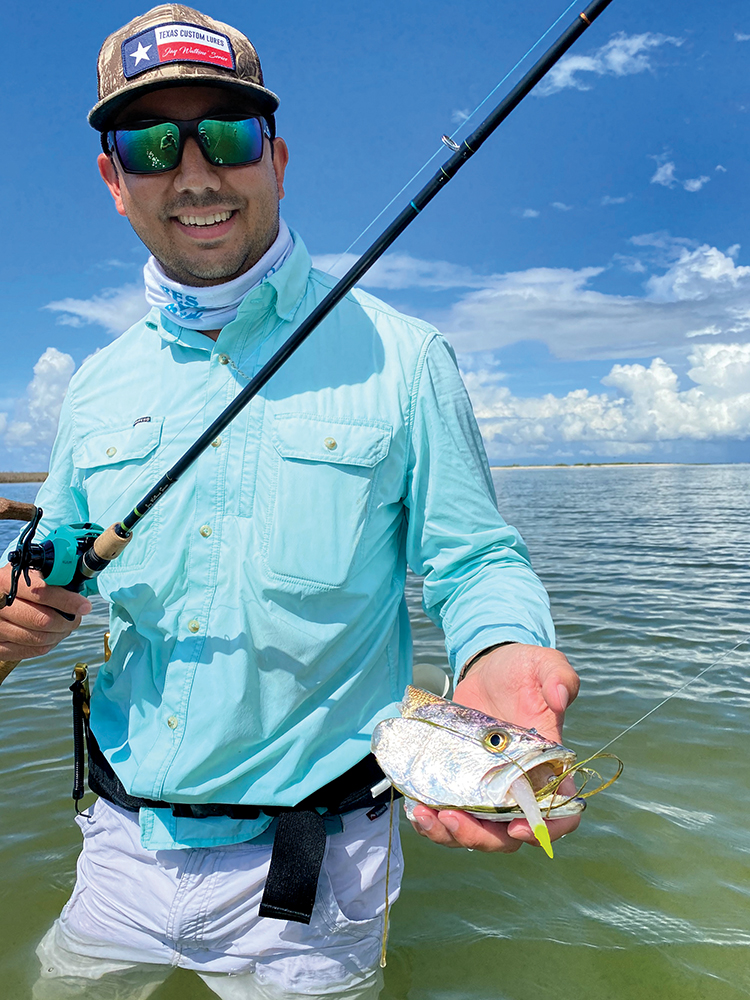 Hunter Finley…”Do I release this one also?”

Boy, have we had some rain or what? I’ve dumped twenty-six inches from my rain gauge, along with several overflows, so my total is less than accurate. Given a choice between drought and rain, as regards fishing, I’ve always said it’s better to have a lot than too little. I will go on record right now though and say we’ve had enough!

So, what has all this rainfall and fresh water inflow done to my fishing game plans? Before I get into the meat and potatoes of this article we must consider two other major factors. First would be the Covid-19 pandemic and the second would be the February freeze. The effect of both these events on our fishery were very significant in my opinion.

During the pandemic, the Rockport area bays were slammed with fishing effort. Great for business once Aransas County officials allowed us to go back to guiding. Due to restaurants being shut down, I believe visiting anglers were keeping more fish than they would have under normal conditions. I was still able to convince my groups to keep only what they might need for a meal or two, but I totally get keeping fish to eat. This was especially true when so many eateries were closed and selections at grocery stores were very limited.

Then in February we had the freeze and we know what happened there. No areas were spared and some experienced very significant losses of trout, redfish and black drum. I will go on record and say that I do not agree with TPW’s surprisingly low estimates of fish killed in the Aransas Bay complex, and I base this on my 2020 daily catch logs, compared with 2021. And, by the way, this is not something I started recently; my daily catch logs go back 35 years.

Now, there is the chance that I am not as good a fisherman as I once was, but my bookings are as busy as I have always been. Add the fact that I see the catches coming to the docks each day.

Have we had some really good trout days this summer? Have we seen strings of days when we did not catch them? Are fish mostly absent in some areas? Do I believe the fishery will make a speedier recovery than in past freeze events? The answer to all these is a resounding, yes. So, with all that said; what am I doing in my daily game planning that might help you catch a few more fish?

We cannot do much about the generally lower population numbers except hope for good news from TPW’s bag seine surveys to declare an uptick in spawning success and fingerling recruitment. We should also be doing our part in releasing trout and redfish to boost the spawning biomass. I have been a promoter of keeping only enough for a meal or two for many years. In fact, in all the years I have been going to Port Mansfield during winter we have practiced catch and release except an occasional redfish for dinner at the Pelican or KJ’s.

With numbers obviously low, anglers must focus on the basics and trust in historically proven patterns. I have the luxury of thousands of days and conditions in my logs that I can refer to. Freezes, droughts, floods, red tide, brown tide, blue-green algae, and fishing pressure that has increased tenfold over my career. I always focus on predominate types of bottom structure wherever I am fishing. Most systems will have multiple types – grass, shell, etc., and all possess some type of shoreline drop-off.

My experience this summer suggests that the southern portion of Aransas Bay, toward Corpus Christi Bay, fared better during the freeze than the rest of the Aransas system. Here we find submerged grassbeds and grass flats to be the predominate structure. Next is to locate an adequate and dependable food source in the area of structure. Water movement (current) is a must-have and deeper-water access is also crucial in the equation.

Water movement is huge when water temperatures reach 85° and higher. Another plus is bait staying close and being pushed-pulled across structure during tidal movements. This is the formula and foundation of my everyday fish locating process.

Never is this more critical to success than when fish populations are low. I am finding fewer numbers of fish in each area but the areas that I have cultivated over the years are still consistently holding some fish. Some is the keyword.

September plans will include targeting areas where I have numerous suitable spots in close proximity of one another. This allows me to stay on the proper structure longer and provides more targets. More targets provide more possibilities, more possibilities will give us more fish. I saw this scenario play out in ‘83 and in ‘89 and I am seeing it again 2021.

I will not harp too much on the importance of spending longer periods in areas where all the right signs are present, even though you are getting only a few bites. I will say that the clients that have learned to listen to me and practice these methods catch more and better fish. By setting up and allowing feeds and patterns to develop around us we give ourselves the opportunity to catch the very best fish an area has to offer. Post-freeze conditions require that anglers be as educated as they can be if success is the goal.

Now add 26-inches of rainfall and runoff to areas already stressed by the freeze and fishing pressure. One might think Mother Nature has it out for us but she does not. What is happening is happening for a reason and nature always seems to find a way. I guess it’s a continued evolution of nature and its beings reacting to the conditions placed upon them. This would probably be a great topic for a future article.

Fresh water runoff can be used the same as tidal movements. I found myself fishing small drains and inlets that held little water before the floods but had become small rivers dumping off the shoreline and out of low areas in the marsh. The nutrient load being transported into the bays was being consumed by hordes of baitfish, and the bait, along with water movement, attracted gamefish.

During my six-day rainout period with no charters, I found myself fishing along Fulton Beach Road in the mouths of the storm drains. I caught a few fish and observed many locals doing the same. One particular lady from a local trailer park was catching some really nice trout but did not want her photo taken. Maybe she thought I was some kind of staIker. It was even better in the bays with several small drains that I frequent regularly producing numbers of better than average trout. As tides receded the size and numbers of fish also diminished.

Fresh water runoff to the extent that we are presently seeing pushes and stacks saltwater along windward shorelines and in back lakes. Over my career I have seen this many times in the San Antonio Bay complex and the many back lakes that lie north and south of Panther Point. You should also be conscious of the line where fresh meets salt in each bay system. Tidal movements will create lines along the shoreline that can stack fish on the higher salinity side of the current break or rip. We see good things happen when these lines pull up tight to shorelines and flood shallow grass with higher salinity water. We experienced this very thing recently and for three days it was about as good as one could wish…considering all that we have had to deal with in 2020 and 2021.

Last but not least, I will relate a tale of thirty years ago, pre-fishing a Trout Masters tournament with Mickey Eastman on the northern portion of Sabine Lake. Mickey was the tournament promoter and ineligible to fish but agreed to take my partner, Lowell Odom, and me. Mickey leaned over the gunwale and scooped the tea-stained water in his hand and tasted it. Swishing it in his mouth, he spit it out and looked at me and proclaimed it to be “perfect.” It looked like iced tea but he’d just stuck a three pound trout. When he wasn’t looking I leaned over and took a sip. I needed to know what perfect tasted like. Thanks to you Mickey, that one sip changed the way I think about fishing in fresh water and I have never forgotten the lesson.

Incidentally, Lowell won that event in the area where Mickey said the water was perfect. I finished a close second and we watched as Mickey (unable to compete in the event but went out for fun) landed and released a 31/32-inch fish that looked huge from our vantage point.

The reason behind this story is to reinforce the importance of not giving up because the water looks fresh. Water of suitable salinity is heavier than fresh water and typically lies near bottom (and holding fish) while the fresh, muddy stuff will be layered on the surface. Other times we see a distinct tide line or rip forming where salty water is being delivered to an area of predominately low salinity on an incoming tide. Now, back to the Mickey story for a second, all the fish we caught in the fresh-looking water that day were on topwaters…so go figure. Just goes to show you that nothing is ever really set in stone with this fishing thing.

The next time you’re on the water try to practice fishing a little smarter and see if it makes a difference during these tougher times. Please release all the trout and reds you can talk yourself into letting swim away. The fishery and your fellow fishermen will appreciate it very much.

May your fishing always be catching!  Guide Jay Watkins

Hot Weather and Fresh Water – We Can Still Catch Trout