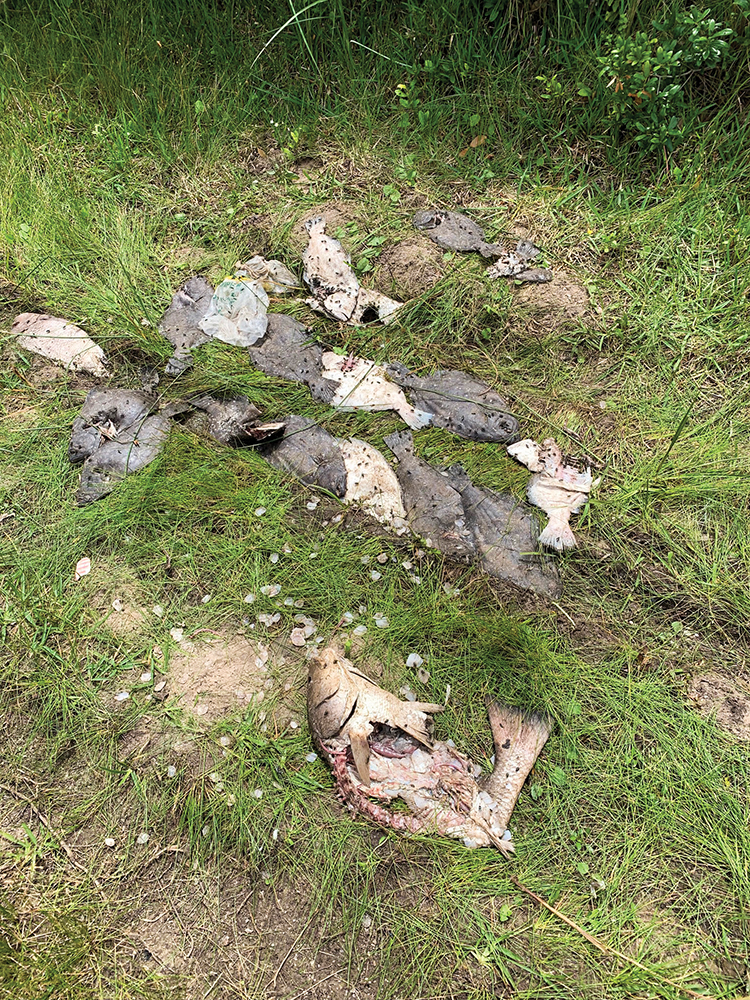 Got quite a shock a couple of weeks ago. I was headed to town and at the intersection of Lane Road and TX 185 there was a flock of buzzards working on something in the ditch. Not at all uncommon to see a flock of buzzards gathered on roadkill – but it wasn’t roadkill.

Twenty-two flounder, two redfish, and a black drum, in total. What a disgusting display of disrespect for resources. Unlike a cat that at least tries to cover its mess. I was incensed and took a closer look.

Examining the evidence at hand led me to believe the fish had been taken on hook and line. There were no punctures that could be associated with gig fishing, neither could I determine they had been taken by a gill net. Gill nets leave their own telltale signs. A strike net, perhaps, but outlaw fishing by gill net is far more common. Add to that, flatfish do not become entangled in gill nets as readily as other species. I learned this by accompanying Coastal Fisheries staff during gill net surveys.

An ice chest had also been left at the site, along with several empty ice sacks.

Assembling the evidence; the number of flounder was well beyond that normally captured by hook and line on a one-day fishing trip, even by party of several fishermen. Whoever did this knew how to catch flounder.

The ice chest and empty ice sacks seemed to indicate the catch had been iced but not cared for. The ice melted and the fish spoiled. The whole mess was dumped on the roadside. I have included a cell phone image and I hope the wanton waste of these fish  disappoints you as it did me.

A box of legally obtained fish makes for great bragging material but allowing them to spoil is not only illegal it is immoral. Let’s hope the individual or individuals responsible for this horribly disrespectful deed read this and change their ways.