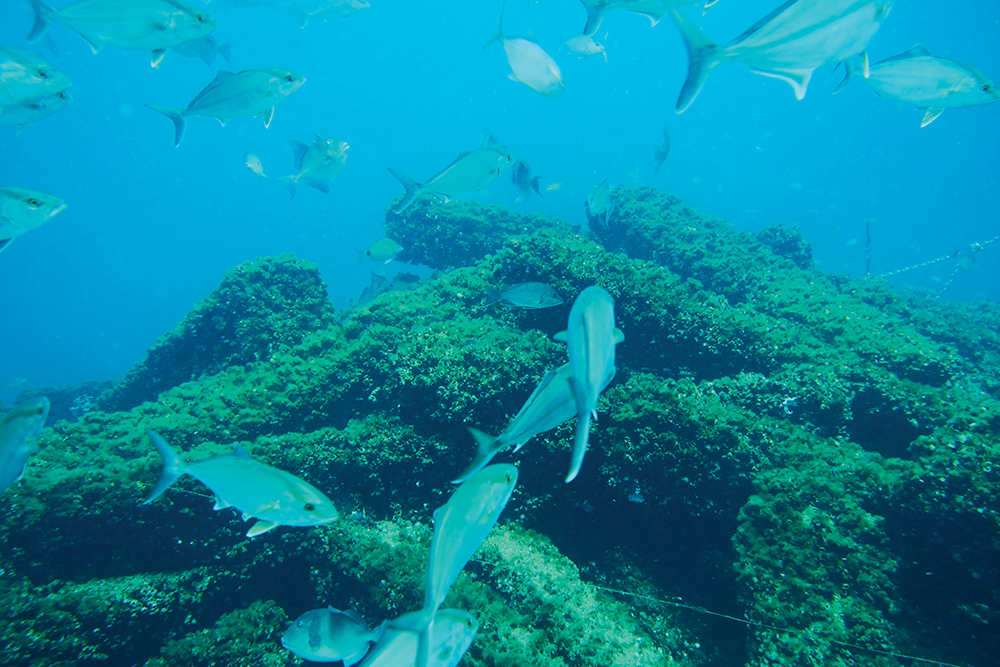 CCA Texas’s Habitat Today for Fish Tomorrow (HTFT) and Building Conservation Trust (BCT) recently approved another $250,000 for nearshore reefing. With this new commitment, CCA Texas and BCT have now directed $2.361 million to nearshore reefing along the Texas coast. This commitment is further cemented by continued active fundraising to provide the necessary dollars for the deployment of more materials into current and future permitted sites along the Texas coast.

Freeport’s Vancouver nearshore site was the first site CCA Texas was involved in.  CCA Texas contributed $50,000 to the project and secured over 100 concrete culverts and catch basins of different sizes through donations from Old Castle Precast in Houston. In addition, 24 granite and limestone blocks ranging in weights from 2 to 16 tons were deployed as well. Since those material deployments by CCA Texas in August of 2010, Texas Parks and Wildlife Department (TPWD) has deployed an additional 800 pyramids into the site. CCA Texas and BCT funded an additional $10,000 in 2018 that was used to deploy an additional 50 reefing pyramids that were donated by Atlantis Marine Habitats.

As CCA Texas’s Habitat Today for Fish Tomorrow (HTFT) habitat initiative began to grow, one of the HTFT committee’s goals was to see a permitted nearshore reefing site out of every Texas port. Some sites were already permitted by TPWD, and others were to still come. CCA Texas approached TPWD about permitting an area out of Port O’Connor and committed the funds to pay for the permitting process. As the permit process was progressing, Texas Parks and Wildlife Foundation’s Keeping it Wild Campaign for Texas picked the Port O’Connor nearshore site as one of its project areas. Through the efforts of the TPWD Foundation, CCA, and BCT, $1.0 million were raised to deploy 500 reefing pyramids into the site in early 2017. In addition, Shell Oil contributed the funds to deploy an additional 100 reefing pyramids within the site. CCA Texas and BCT have contributed $700,000 to the Port O’Connor Reefing Site

The Corpus Christi/Packery Channel nearshore site began receiving materials in the spring of 2013 with more than 100 culverts and catch basins, and 470 reefing pyramids being deployed. In October 2015, the 155 foot freighter Kinta was sunk within the site, providing more diverse marine life habitat and recreational diving and fishing opportunities. This project exhibits the power of community support and partnerships through the efforts of TPWD, Saltwater Enhancement Association and CCA Texas.

The Lower Texas coast nearshore waters have benefited from the efforts of TPWD, CCA Texas, BCT, Friends of RGV Reef (FRGVR) and others with multiple deployments in the Port Mansfield and Rio Grande Valley Reef out of South Padre Island. CCA Texas and TPWD teamed to deploy more than 4,000 culverts into the Port Mansfield site. These culverts were donated by Alamo Concrete. These culverts provided immediate and close-to-shore fishing opportunities for recreational anglers out of Port Mansfield and continue to provide angling opportunities.

The Rio Grande Valley site grew from a dream of local RGV recreational anglers Gary Glick, Bob Glick, Daniel Bryant and others in the community to a 1,600 acre permitted reefing site. This site is the largest ever permitted in the state of Texas and FRGVR is setting the bar high in effort and the amount of materials that have been deployed into the site. To date, the material deployments have been numerous and include more than 50 reefing pyramids, over 87,000 cinder blocks, low relief concrete rubble, and a shrimp boat and tugboat have also been deployed into this reefing site. Concrete railroad ties have been used to create a 500’ long ridge that stands 10- to 15-feet above the seafloor in a location appropriately dubbed “CCA Corner.”  Additionally, a 32-foot tall “Mountain” consisting of concrete railroad ties was created within the reefing site. CCA Texas and BCT have committed an additional $150,000 to the RGV Reef, bring the total commitment to this site to $611,000. These funds along with other funds raised by FRGVR will help grow the “Mountain” to a height of 45-feet. An additional ten 200-ton patch reefs, also of concrete railroad ties, will be deployed to “armor” the new CCA nursery reef. This new nursery reef will be constructed from cinder blocks, which have shown to be very effective habitat for a variety of juvenile fish species. FRGVR has laid the foundation of future nearshore reef habitat for the entire Texas coast by implementing varied forms of small, medium and high relief materials that ultimately create life-cycle reefing for all age classes of finfish.

The Upper Texas coast nearshore waters began seeing the benefits of the TPWD Nearshore Reefing Program in the fall of 2018. CCA Texas and BCT contributed $211,000 to the Sabine HI20 nearshore site and these funds were used to deploy 200 granite and limestone blocks, and a steel-hulled barge into the Sabine HI20 site. In July 2019, CCA Texas and BCT approved another $100,000 in funding to be used as matching funds with Cheniere Energy. CCA Texas and BCT are currently working with Cheniere to deploy another load of materials in the near future. This new commitment further cements CCA Texas and BCT’s commitment to reefing permitted sites along the entire Texas coast, working with various partners and Texas Parks and Wildlife Department.

Reefing in Big Man’s Reef began in 2018 with the deployment of 180 reefing pyramids and the site received an additional 180 low-relief reefing modules funded by Texas Parks and Wildlife Department in September 2019. This combination of low and mid-relief reefing has proven to be effective in the RGV site and CCA Texas and BCT look forward to seeing this trend continue up and down the Texas coast. CCA Texas, BCT and Shell Oil Company have committed $329,000 to the Big Man Reef site, and are currently working with contractors to deploy reefing pyramids. Plans are to have these materials deployed in the winter of 2019/2020.