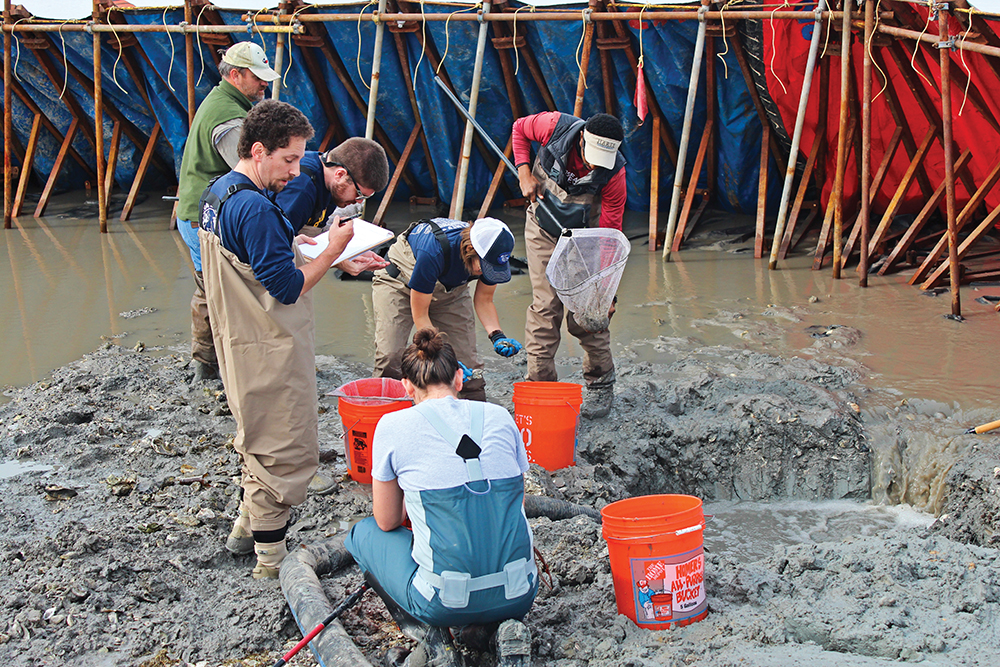 Construction for the restoration efforts to restore over 100 acres of estuarine marsh habitat in the Egery Flats area of Upper Copano Bay started in August 2018. Since that time, the first set of culverts have been replaced, and the replacement of the second set of culverts began in early December 2018. The replacement of these culvert sets is critical in the effort to restore this important estuarine marsh habitat. Once the replacement of these culverts is completed, additional efforts such as marsh grass plantings will help jump start the long term goal of a restored and healthy marsh.

Habitat within eco-systems along the Gulf coast, and all the coastal regions of the United States and the rest of the world, has declined for decades due to development, transportation infrastructure, oil and gas operations, natural causes, and much more. CCA Texas and Building Conservation Trust (BCT), CCA National’s Habitat Program, have both played key roles in helping restore degraded habitat.  These efforts are often through partnerships with organizations such as Coastal Bend Bays and Estuaries Program (CBBEP), Galveston Bay Foundation (GBF), Texas Parks and Wildlife Department (TPWD), and other similar non-profit organizations and government entities.  These projects have included marsh restoration efforts through the use of breakwaters, beneficial use dredge spoil, grass plantings, and floating island methods.  Phase One of one such restoration effort was recently completed in Egery Flats, located on the upper end of Copano Bay.

Egery Flats sits on the western edge of Copano Bay near the mouth of the Aransas River. In 1945, when Farm to Market Road 136 was constructed, two culvert systems, each consisting of two 30” round culverts, were installed to allow water to flow in and out of Egery Flats. Over time, the water flow through these culverts has become restricted enough to impact water quality and habitat, which has resulted in the conversion of over 100 acres of estuarine marsh and habitat to open water since the 1950s.  While FM 136 connects local communities and is a favorite spot for roadside fishermen, crabbers, and birders, Egery Flats has deteriorated greatly since its construction.

“This hydrological restoration project will lead to reduced salinities in Egery Flats and will improve conditions for over 600 acres of marsh, submerged aquatic vegetation, and tidal flats,” commented Coastal Bend Bays and Estuaries Program Project Manager, Rae Mooney. Mooney continued, “This will lead to overall increased ecological productivity in this area as these habitats serve as a critical nursery for finfish and shellfish and important feeding grounds for waterfowl, wading birds and shorebirds.”

CBBEP received a grant from the National Fish & Wildlife Foundation’s (NFWF) Gulf Environmental Benefit Fund for the project. The project will replace the two 30” culverts with three 3’ x 6’ concrete box culverts at each location. These new culverts will not only increase water flow greatly, but they will restore critical hydrology which will lower salinity levels in the area and enhance over 600 acres of emergent marsh, submerged vegetation, and tidal flats at Egery Flats. Prior to the start of construction, CBBEP worked with Mission-Aransas National Estuarine Research Reserve (MANEER) at the University of Texas Marine Science institute and TPWD to collect valuable preconstruction data, including porewater salinity and vegetation monitoring. This data will be valuable in the evaluation of future projects. Once completed, monitoring will continue and will help determine the effectiveness of the culvert replacement and success of the restoration effort.

Successful projects are often successful because of a strong partnership base that works together hand in hand. The Egery Flats project has several partners including: National Fish & Wildlife Foundation, Coastal Bend Bays and Estuaries Program, Texas Parks & Wildlife, US Fish & Wildlife Services, Building Conservation Trust, Coastal Conservation Association Texas, Mission-Aransas National Estuarine Research Reserve, University of Texas Marine Science Institute, and Texas Department of Transportation.  All of these partners have and will continue to play a vital role through the completion and post-monitoring effort of the project. CCA Texas and BCT contributed $70,000 to this project. These funds will be used primarily to plant approximately eight acres of emergent marsh, to help enhance the re-vegetation of the flats.

“Partnerships are a key and critical component in completing projects such as Egery Flats,” commented Habitat Today for Fish Tomorrow committee chairman Jay Gardner. Gardner continued, “CCA Texas and HTFT are excited to see the outcome of this important project, and we look forward to continuing to work with Coastal Bend Bays and Estuaries Program and other partners in the future.”

Habitat restoration and creation is a vital component to insuring healthy and bountiful coastal resources for the future. CCA Texas and BCT are committed to continuing their support to projects along the Texas coast for generations to come. This support would never be possible without the continued success of the grassroots efforts of CCA Texas volunteers across the state and supporters within the communities in which CCA Texas chapters exist. CCA Texas and BCT are continuously seeking project and funding partners for habitat efforts. For more information about CCA Texas or BCT, please contact John Blaha at (713) 626-4222 or [email protected].