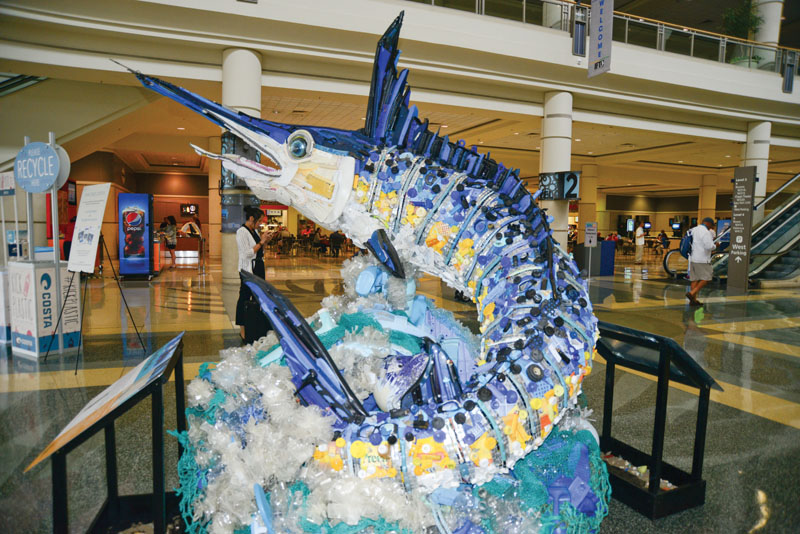 Costa’s “trash marlin” that greeted visitors to ICAST 2015.
One evening last week I was watching the serial television show, Buccaneers and Bones. This series is presented by the Bonefish and Tarpon Trust to raise awareness about conservation of three very popular saltwater species; bonefish, tarpon, and permit. Some legendary anglers as well as celebrities host the series. I was watching an episode where actor Liam Neeson describes his connection to the fish. And while I cannot recite verbatim what he said, the gist of it was that the connection between him and the fish was accomplished through a marriage of technology and engineering. In a weird kind of way what he said spoke to me. However, it also troubled me.

To be a little more specific, the connection Neeson described was a highly-evolved and engineered graphite rod, a well-engineered and precisely machined reel, and a polymer (plastic) line. It is the last item that I want to discuss. Not so much the line, but the plastic.

Now, I sure do not want to come off sounding like some kind of left-wing enviro-nutcase because, believe me, I am not. But – one of the biggest threats to our environment and especially our oceans is plastic waste. If you don't believe me, do an internet search and read up on the "island of plastic." If you would like more information, go to the Costa Del Mar website and check out their Kick Plastic campaign. Of particular note is the marlin sculpture they created using only discarded plastics collected from oceans and beaches. It is eerily spectacular.

With that being said, many of the products we use in the fly fishing industry (as well as conventional fishing) have plastic components. But this article isn't about the plastics used in our gear because, let's face it; plastic is an important part of our daily lives. This is about how fishermen can reduce the impact of plastic on the environment.

I would like to believe when I see a drink bottle or other plastic floating in the water or washed up on a shoreline – it never got there through careless action of a recreational angler.

More than likely, at least in my mind, I prefer to think it came from some type of commercial vessel dumping trash overboard, maybe some dirty redneck who could not care less about litter on roadways or waterways, but that's another problem, entirely. However, my idyllic thoughts/hopes notwithstanding, there are many things we all do daily that increase the amount of plastic that ends up in the environment in general, not just our oceans and bays.

Probably, one of the biggest things that we are all guilty of when we go fishing on a hot summer day is loading the ice chest with bottled water. I know that I have been. The amount of plastic bottles that eventually make it into the environment is astonishing. Now I have always been a proponent of recycling no matter what the cost, however, maybe the point should be that we need to try to reduce the amount of plastic we use, whether we recycle or discard properly.

One of the things I am currently doing to reduce the amount of plastic I could possibly introduce to the environment is buying drinking water by the gallon jug rather than bottles, and offering it to clients in Yeti Rambler insulated cups. This is working very well so far although it does require daily washing of the Ramblers in preparation for the next outing. A small price to pay in exchange for a more environmentally-responsible alternative.

Another thing we can do as anglers to reduce the amount and effects of plastic on the environment is to purchase goods in plastic containers made in the USA. The reason here, as much as I detest some things about the EPA, this agency imposes regulations on US manufacturers that help protect the environment, while many countries do not. This especially seems to be true, based on my research, with China.

Another thing that we can do to reduce the amount of plastic going into the environment is to reuse plastic containers that some everyday items we use are packaged in.

Not too long ago I was fishing with my friend Jason "Smarge" Smargiasso and he broke out a waterproof container he uses in his skiffs to organize and protect some of his gear. It was made from a plastic bottle, a product he purchases regularly. He had spare sunglasses, a spare handheld GPS and many other items potentially necessary for a day of fly fishing. Another cool thing about his containers is that they make great "sticker farms" to acknowledge/recognize his favorite fly fishing products. There actually is a little more to the story than just this but, I will save that for another day.

The point is, as fly fishermen, we have always led the way when it comes to conservation. Trout anglers from the mountains taught us much about catch and release, long before we felt it necessary here on the coast. So, why should we not also do the same with the protection of our environment? Let's all take a look at our buying habits and reuse/recycle all that we can. The future of our oceans, bays and estuaries depend on it.

Until next month, be good and stuff like that.