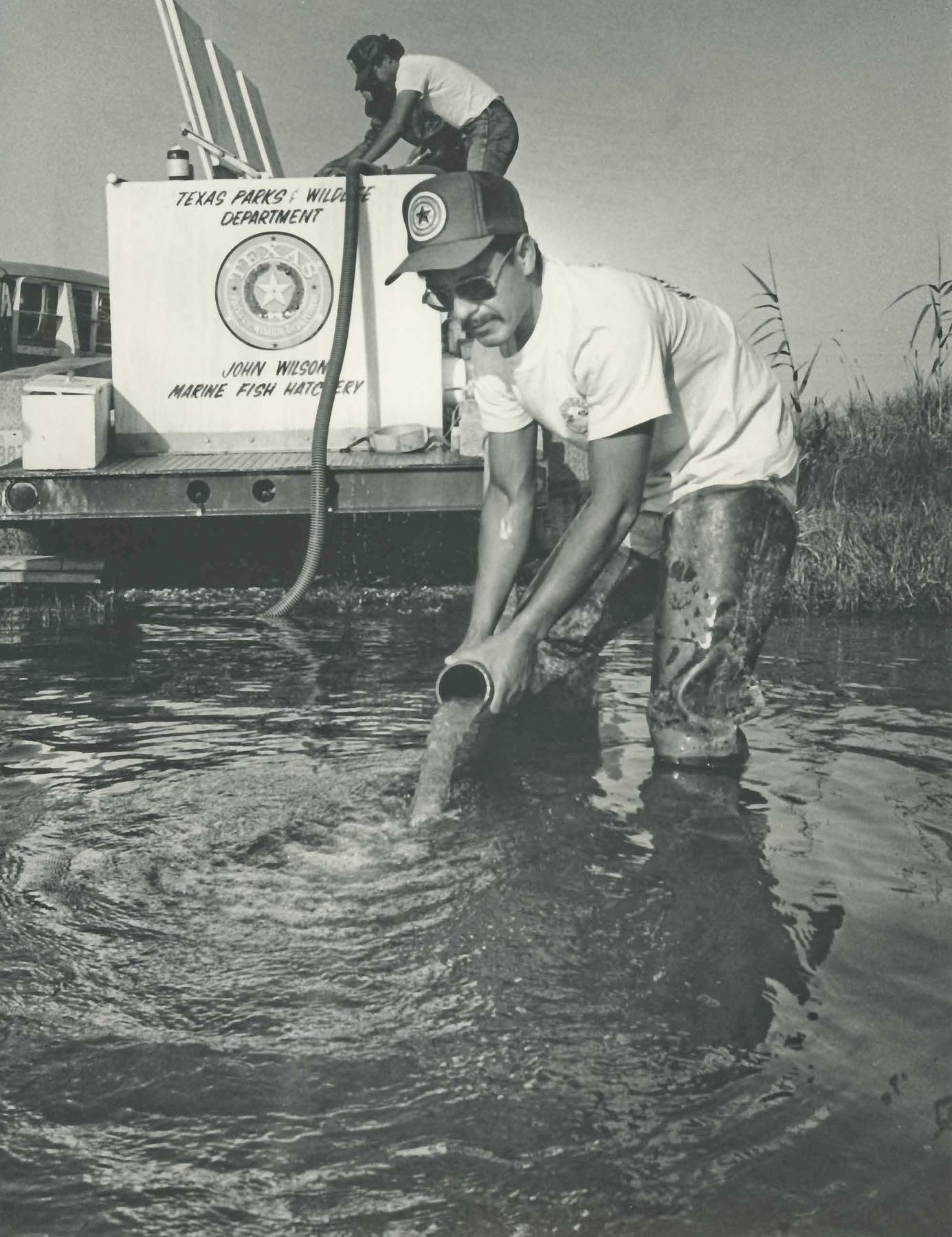 Fishery managers utilize stocking for any of several reasons. Although the particular goals of any given stocking program may vary, overall they usually seek to accomplish one or more of these goals:
1) provide additional harvest for commercial and/or recreational anglers,
2) augment numbers of individuals capable of spawning,
3) prevent extinction of threatened stocks,
4) replace losses due to human interaction, and/or
5) introduce different genetic makeups into a population.

The first hatchery in the US was built at Mumford, New York, in 1864. The idea of stock enhancement as a means to increase commercial and recreational catch was politically popular, and many other programs soon followed the Mumford trout hatchery, such as those in Gloucester and Woods Hole, Massachusetts, and Boothbay Harbor, Maine.(4) For over sixty years, these hatcheries released annually many millions of young cod, haddock, polluck, winter flounder, and lobster. But by mid-twentieth century, the programs for marine fish were discontinued, primarily because the technology for marking hatchery fish didn't exist, so there was no way to evaluate whether or not hatchery releases were actually contributing to the population. Furthermore, scientific knowledge of the early life of these fish in nature was limited, so it was just a guess as to where to release eggs and fry.(1) The expectations of stock enhancement as a remedy for overfished wild populations were unfulfilled, and hatchery programs lost favor during the 1940s.(4)

Luckily, research into the possibilities of augmenting wild stock through hatchery programs continued, and technology for the mass production of fingerlings began to appear in Europe and North America in the 1970s.(1) Just in the nick of time! In 1970s Texas, the red drum population began a severe decline from overfishing, prompting the Texas Parks & Wildlife Department (TPWD) to instigate a three-pronged recovery plan in 1975.(4)
1) Initiate an independent monitoring program to assess populations of marine species, including red drum.
2) Implement restrictive regulations to reduce fishing pressure (ultimately, no nets were allowed in Texas waters, the commercial sale of wild-caught red drum was banned, and sport anglers were restricted to three fish per day, 20-28 inches long).
3) Develop and set in motion a marine enhancement program (release hatchery-reared fingerlings and assess ensuing survival).

Texas had long been aware of the need to regulate its fisheries resources, passing protective legislation as early as 1874. The state's first hatchery was built at Barton Springs in 1881 to propagate the then-popular German carp (which lost popularity about four years later - typical celebrity). Ten years after the German carp's fall from the limelight, the Texas Fish and Oyster Commission was established, which after a few mergers and name changes became the Texas Parks & Wildlife Department.(4)

By the mid 1970s, state research into the culture of popular marine fishes was taking its first big steps. In 1974, researchers at the Port Aransas National Marine Fisheries Service Lab were the first to spawn redfish in captivity. At the time, the goal was to study the fish themselves, their life histories, and not necessarily from a practical point of view, but just to learn.(5) State researchers at the Perry. R. Bass Marine Fisheries Station in Palacios built on these advances and took the project in a new direction. By combining the experience of established stock enhancement programs, such as the striped bass program that was started in South Carolina, and the new research coming out of Port Aransas, the researchers at Perry R. Bass succeeded in growing out red drum larvae to fingerling size in fertilized rearing ponds in 1975.(6) These were then released into Matagorda Bay. Free at last!

In 1976, capture of tagged stocked red drum up to 284 days following release in Matagorda Bay documented that stocked red drum could survive in the wild. From 1979 through 1981, tests were made in St. Charles Bay for the possible use of hatchery-produced fingerlings for stock enhancement. Some fingerlings were micro-tagged before stocking, a few of which were later recaptured. In addition, some redfish fingerlings were stocked in the spring; these out-of-phase fish were easy to distinguish from natural wild stock, even months down the line.(6) Following this double confirmation of the survival of stocked fish, the TPWD, in partnership with the Gulf Coast Conservation Association (now CCA Texas) and the Central Power & Light Company (now American Electric Power), constructed its first production-scale marine fish hatchery in 1982, the CCA/CPL Marine Development Center (MDC), in Corpus Christi, which began large scale stocking a year later.

Texas now has the largest marine stock enhancement program in the US and annually stocks over thirty million hatchery-reared early juveniles.(1) The process: mature adults are housed in the hatchery and induced to spawn naturally in tanks. Eggs are transferred to incubators to hatch. The tiny larvae are then stocked in ponds to grow. Fingerlings are collected from the ponds in about a month and a half and transported to bays, thus enhancing the wild populations.(3)

With the success of the MDC at their back, the TPWD, Dow Chemical USA, and CCA Texas collaborated to construct a state-of-the-art hatchery. In 1996, Sea Center Texas, near Lake Jackson, became operational.(4) Since 1985, the coastwide gill net redfish population count has stabilized and increased. Stocking augmented the natural spawn; improved harvest restrictions allowed more fish to survive. Together, these two practices have proven to be a successful combination for managing Texas's natural marine resources wisely.(2)

But the road to redfish recovery had its share of potholes, many of which are still there today. Beyond the scientific difficulties of simply keeping the fish alive and convincing them to breed, there was a prevailing cup-half-empty attitude to combat: it'll never work, so why try? Some people believed that since it had failed in the past, there was no reason to try again. Some thought that the numbers hatcheries could produce just wouldn't be enough to actually impact the wild populations.(7)

Redfish release totals since the inception of the program have varied from seven to thirty-seven million per year, peaking in the 90s and early 2000s. In 2008, there were 25,136,802 redfish stocked in Texas bays.(4) According to a study published in the North American Journal of Fisheries Management, the percentage of hatchery-released redfish in 2008 ranged from 1.13% in Aransas Bay to 9.35% in Galveston Bay. Hatchery fish were identified in sample nets by genetic markers.(8)

Some criticisms were fair, even constructive,(6) and through such "robust exchanges," the program has grown by integrating several scientific disciplines (genetics, physiology, marine ecology, mariculture, etc.) into the evaluation of the stock enhancement program.(4) Everyone involved is very aware of past mistakes, such as when the introduction of small mouth bass into Texas nearly wiped out the Guadalupe bass (the state fish!).(6) What did we learn, class? Fish with little mouths can still have a big bite!

Other concerns also exist. Does stock enhancement reduce genetic variety in wild stock? Well, there are certainly still uncertainties about the effects on wild stock. Despite being over 100 years old, stock enhancement science is still pretty young. As more research is collected, this and other questions may be answered.(4) But there are already practices in place to prevent genetic stagnation. Brood stock is regularly changed out. Current brood stock is returned to the bays, and new wild stock is brought in.

Finally, there's this: is the program cost effective? Early stock enhancement programs were not, requiring large sums to create and maintain, but having nothing to show in return. Despite large hatcheries, many species still declined. Nowadays, however, the value of recreational fishing in Texas has increased ($2.2 billion a year!), and new technologies are refining hatchery processes.(7) At the risk of sounding like a political candidate running for office, there's a lot of numbers behind the curtain, but the main point is, we're in the green. Of course, that's disregarding the real value of the program, which is that we still have redfish and trout in the bays.(4)

In the beginning, the most important part of the program was the science and the support;(4) processes needed to be sound and implementation of management strategies needed to be understood.(7) But every phase was interconnected; if one failed, all the dominoes fell.(6) At first, the plan was to stop stocking when the populations recovered and move on to something else, but recreational fishing today is impacting the stocks as much as or more than commercial fishing did 50 years ago.(6) While the number of redfish being stocked annually has decreased in recent years, it's clear that if the current growth in fishing pressure continues (which it will, parallel to population growth), stocking will be a necessary management tool in the future.(7) Those popular fish that have not yet been recruited for stock enhancement, beware. Your time will come.

"Three fourths of the Earths surface is water, and one fourth is land. It is quite clear that the good Lord intended us to spend triple the amount of time fishing as taking care of the lawn."
~Chuck Clark