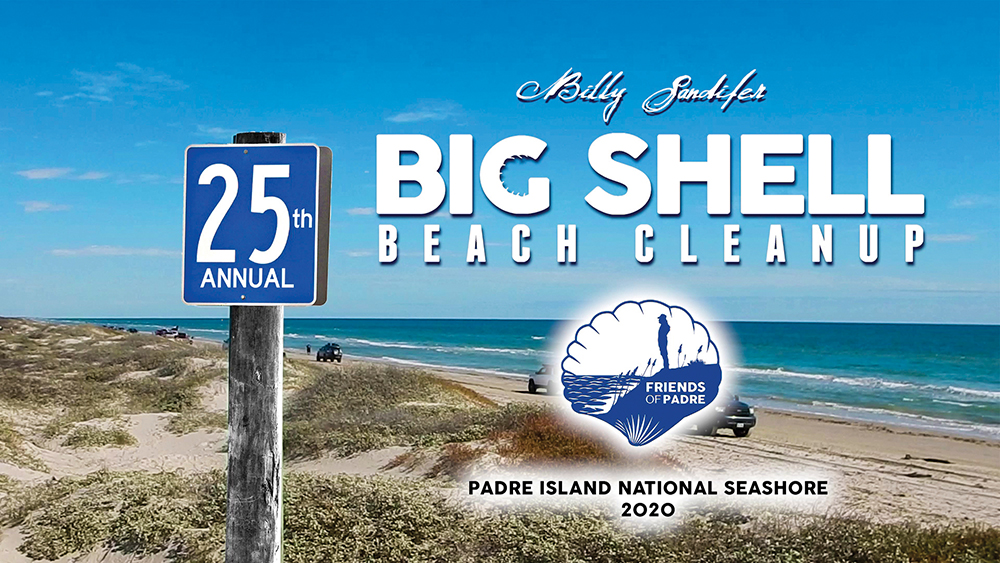 Saturday February 29, Leap Day, dawned with clear skies and temperatures in the upper 40s. The tide was fine and we found ourselves with perfect conditions. No northeast winds or frontal system to push the tide toward the dunes, so we were set with a plan. This time we would send the first groups farther south than ever before with Clay Wernli’s crew headed all the way down to the 45-mile marker.

A new record of 1500 volunteers showed up and together we removed 60 tons of trash from 33 miles of beach – more than half of the 62 miles that comprise Padre Island National Seashore south of Park Road 22. Billy would have been proud although those that knew him well also know he would never have said so. He would instead have said, “We got half the beach, but y’all missed a half mile near the blah-blah mile mark.” Billy’s way of reminding us that we can always do better for our beloved PINS beaches.

We’d like to thank Leon McNinch and the Ruth Parr Sparks Foundation for their continued support. For the second year our point man representing Yeti, Kurt Obersteller, came in huge with Yeti products – water bottles, cups, and 500 Yeti hats. Kurt also led a group of Yeti campers cleaning the north end of the beach.  Thanks also to Curtis Mai and Sharkathon for their generous donation toward this year’s commemorative t-shirts created by Jacob Augs of Augs Art and Design.

Our media partners came through again. Many thanks to Big Frank Franklin and Sam Eulenfeld of K99 and 1360 KKTX for their promos and the public affairs podcast promoting this year’s cleanup. Thanks to KZTV’s Action 10 News Coastal Living Program for featuring us on the February 28 program. Thanks to Everett and Pam Johnson of Texas Saltwater Fishing Magazine for getting the word out all across Texas. Thanks to Dale Rankin and our own Jay Gardner for their coverage in the Padre Island Moon. Ron Henne Jr., thank you for running our ads in the Saltwater Angler. Thanks also to Corpusfishing.com for highlighting us on the forum and the Weekend Outlooks.

Thanks to Katherine and Daniel Dain of the Corpus Christi area Domino’s locations for the generous pizza donation. They have been with us since the early days, as has the Corpus Christi CCA chapter who furnished the swag bags and Wienerschnitzel chili cheese dogs. Thank you John Blaha. Thank you to HEB in Flour Bluff for providing the troops down-island with snacks and supplies. Thank you to Michael Laskowski Sr. and his wife Lisa of Trac-Works for the donation of work gloves.

We’d like to thank these partners in conservation for their sponsorship this year – The Coastal Bend Bays and Estuaries Program, Coastal Bend Audubon Society, Mission-Aransas National Estuarine Research Reserve, and the Ekstrom family who spearheaded our plastic recycling effort that resulted in 1.5 tons of recyclable plastic.

I would like to conclude with a shout out to all the people behind the scenes whose efforts are so invaluable to us. Without them none of this would be possible: Padre Island National Seashore personnel; our intrepid section leaders who organize the troops down island – Clay Wernli, Mel Schneider, Don Kraeft, Ricky Torres, Eddie Collins, David Williams, Rolland Hyatt, Brad Tabor, Troy Adler/Greg Stanford, Reagan Arnold and the Citgo Crew - Sean Curless/Casey Sanger, Bill and Will Bray, Dr. Tony Hein, Chris Cherry, Steve and Donna Gregory, Logon Connor, James Clark, Shawn Queeney, Eric Ozolins/Scott Nelson, Tim and Jennifer Merchant, David Webb, Russell Weir, Jay Gardner, Tyler Thorsen, Patrick Sciantarelli, and Jeff Wolda in the Friends of Padre Command Vehicle.

Until next year, it is very appropriate that we sign of with some of our founder’s famous bylines, as only he could say them… "Life's A Hoot. Get You Some of It.” “Be Careful, Be Courteous, Be Kind."