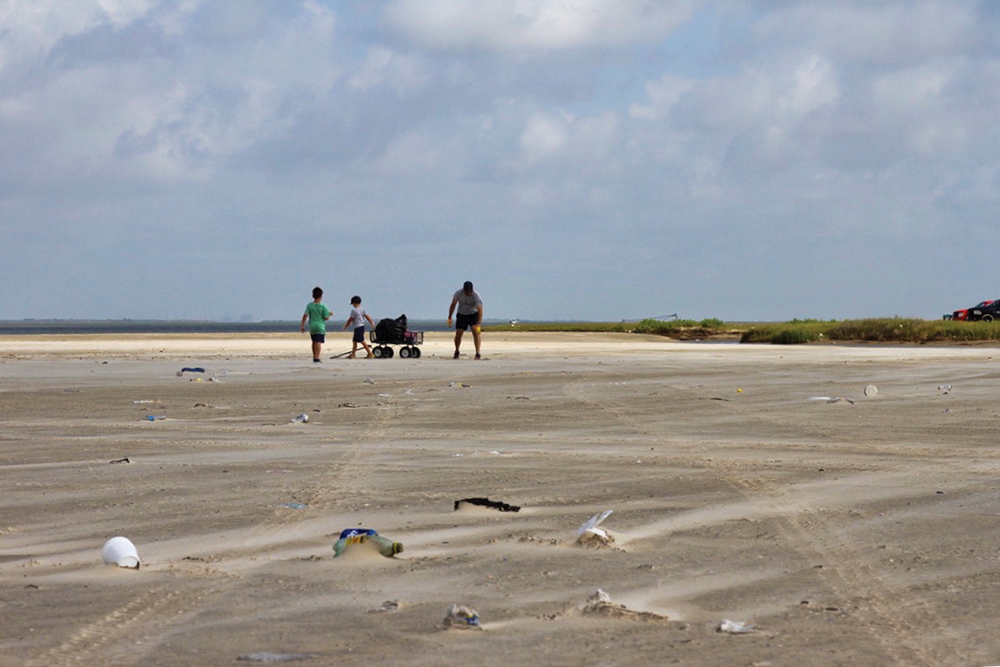 Our column this month recognizes the conservation effort of Houston-area angler Brian Adams.

San Luis Pass has long been a popular destination for fishermen from all across Texas. Boaters and beach anglers alike find uncommon opportunity for a variety of species – speckled trout, redfish, flounder, Spanish mackerel, sharks, occasional king mackerel, and more. Anglers can be seen almost shoulder-to-shoulder during the bull red run – that’s how good and popular the Pass is.

Besides great fishing, one of the most popular things about San Luis Pass is the accessibility. Unlike other popular fishing spots, the pass provides free access to the public and you can drive right to the shoreline. You just don’t find that everywhere you go – nowadays anyway.

Although four-wheel drive is advised, the short distance from the pavement at the Galveston side of the San Luis Pass bridge to the edge of the water can be covered handily with two-wheel drive anytime recent rains have tightened the loose sand of the two-track trails.

Sadly though, it just might be the free and easy access aspect that brings out the worst in some of the people who fish there.

Word got ‘round in mid-June that the pass was full of specks and Brian Adams paid a quick visit to check it out. Sure enough, the fish were there. But what he saw on the beach was very disappointing.

Trash was everywhere, some freshly deposited, some older and partially buried by blowing sand and tide. Interestingly enough, some of the trash had been bagged but still abandoned. All manner of discards were in evidence – food and drink containers, broken lawn furniture, buckets, and even several E-Z-Up style shade canopies. Some places appeared to have been overnight campsites. While some of the trash may have washed in from the gulf, Brian says it was clear to him that the majority had been left behind by fishermen.

Why anybody would treat such a beautiful place with horrible disrespect can only be imagined. Brian took the insult very personally.

His first stop was the popular 2CoolFishing internet message forum where he posted photos and sought help in organizing a cleanup project. Lots of good people on 2Cool. Next he made a call on the leaders of Boy Scout Troop 320 – Crosspoint Community Church, Katy Texas – Texas Skies District.

Hoping to make an impact ahead of the July 4th – Independence Day holiday, Brian marshalled a squad of 34 volunteers (including Boy Scouts) to hit the beach the following weekend. Not much time to get everything organized, but as the old saying goes, “If you want a job done, assign it to somebody that’s already busy.” He hopes to able to give more notice and invest more planning for the next event he promises will happen soon.

Bright and early Saturday morning June 23, Brian and his all-volunteer crew hit the beach running with rakes, shovels, trash bags, and desire to get the job done.

The total area restored to pristine beauty measured out to a little more than 18 acres. And the trash, weighed at dump, totaled 3,240 pounds – much of it plastic!

TSFMag offers mega-conservation kudos to Brian, Boy Scout Troop 320, Techline Pipe (of Montgomery, TX for donations of cash, equipment, drinking water, and work gloves) and all the volunteers from 2Cool and/or word-of-mouth who care enough about Texas coastal resources to join Brian’s team.

As my dearly departed friend Billy Sandifer used to say of the volunteers who participated in his Big Shell Beach Cleanup – “You are my heroes.”

Kudos and sincere thanks to all!