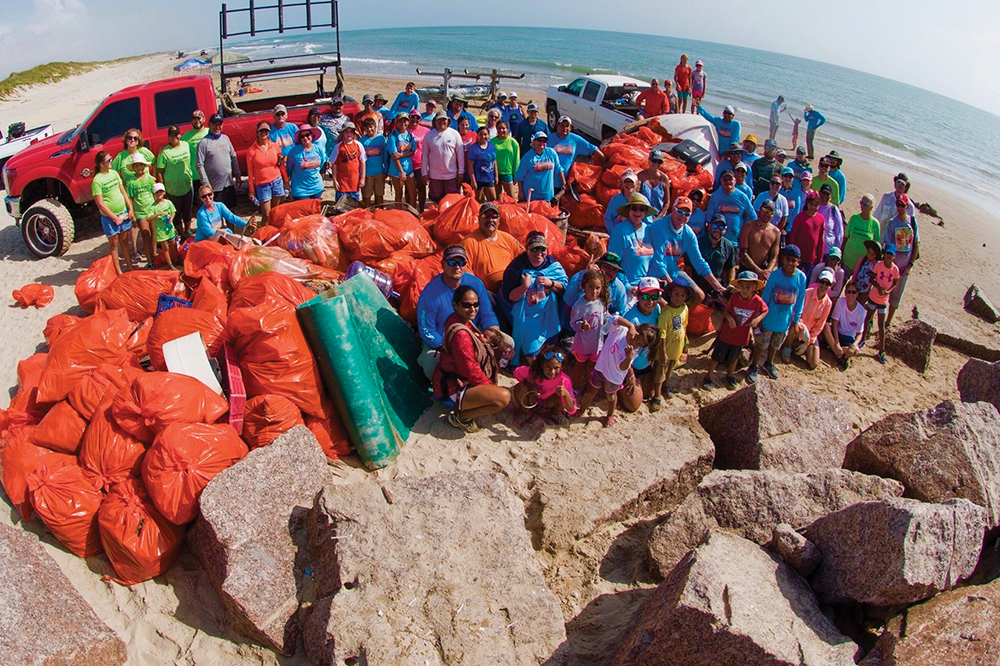 TSFMag salutes Miller and Kathie Bassler and the incredible team of volunteers they have brought together for their efforts in the recent Port Mansfield East Cut and Beach Cleanup.

Recently accomplishing their tenth and largest cleanup event to date, participation numbered near 100 hard-working conservation-minded men, women and children. There were no doubt even more engaged behind the scenes organizing and providing meals, logistics and other details.

Logistics and safety in this event always pose a tremendous hurdle as the mouth of the East Cut Jetty lies approximately six miles from the harbor, accessible only by boat. And even more challenging, some sixty-two miles down the Padre Island National Seashore from park headquarters. Sixty-two miles of treacherous sand that can swallow the most meticulously prepared four-wheel-drive vehicles and buried debris that can flatten tires faster than you change them.

So, if getting the cleanup team to the work site might seem daunting, consider hauling 15-tons of beach debris back across the bay, or all the way back up-island to park headquarters for proper disposal.

Where does it all come from? Some of it drifts ashore on gulf currents, sure enough, and one can only speculate the source. Sadly, though, a significant portion of the debris is left behind by careless fishermen and campers who have no regard for the wonderful resources they enjoy.

The day began before sunrise with the cooking crew preparing a hot breakfast for volunteers at the Port Mansfield Chamber of Commerce Pavilion and packing sack lunches. Some twenty-five bay boats manned by volunteer owners and charter captains donating the day (rather than running a charter) then departed for the East Cut. Leapfrogging as sections of island shores were cleaned, eventually making their way to the jetty and tackling the Seashore beach.

Meanwhile – a fleet of trucks and trailers were making their way down the PINS beach to rendezvous with the cleanup crew and transport the debris back to park headquarters. Some made multiple runs. To demonstrate how treacherous beach driving and towing a trailer filled with trash can be, just ask Brian McKinsey who ended up “donating” a transmission for his efforts.

All said and done, several miles of East Cut and two miles of PINS beach were restored to pristine beauty.

Miller and Kathie are obviously the nucleus of this spectacular effort but are quick to say they couldn’t even begin to pull it off without tons of work from a host of dedicated volunteers.

Many of the out-of-town workforce were hosted by Port Mansfield homeowners who accommodated them for the weekend deserve great praise. Y-Knot Rentals was highly instrumental in helping organize housing. Sunset House Motel donated rooms. Charter captains, too numerous to mention for fear of omission, who could have made a nice paycheck that day, instead pitched in to carry workers across the bay. Pelican’s Cove provided the celebration party to commemorate the event. Financial sponsors who cannot attend but contribute substantially to the event’s success are also greatly appreciated. The list just goes on and on.

The bottom line to all of this that we the outdoors-people of Texas, who cherish our natural resources, are not content to just sit by and complain. We roll up our sleeves and do something. We clean waterways and beaches of harmful trash and plastic. We educate others to practice better trash management, on the water and in everyday life. We care and we get involved.

Mega TSFMag conservation kudos to all!