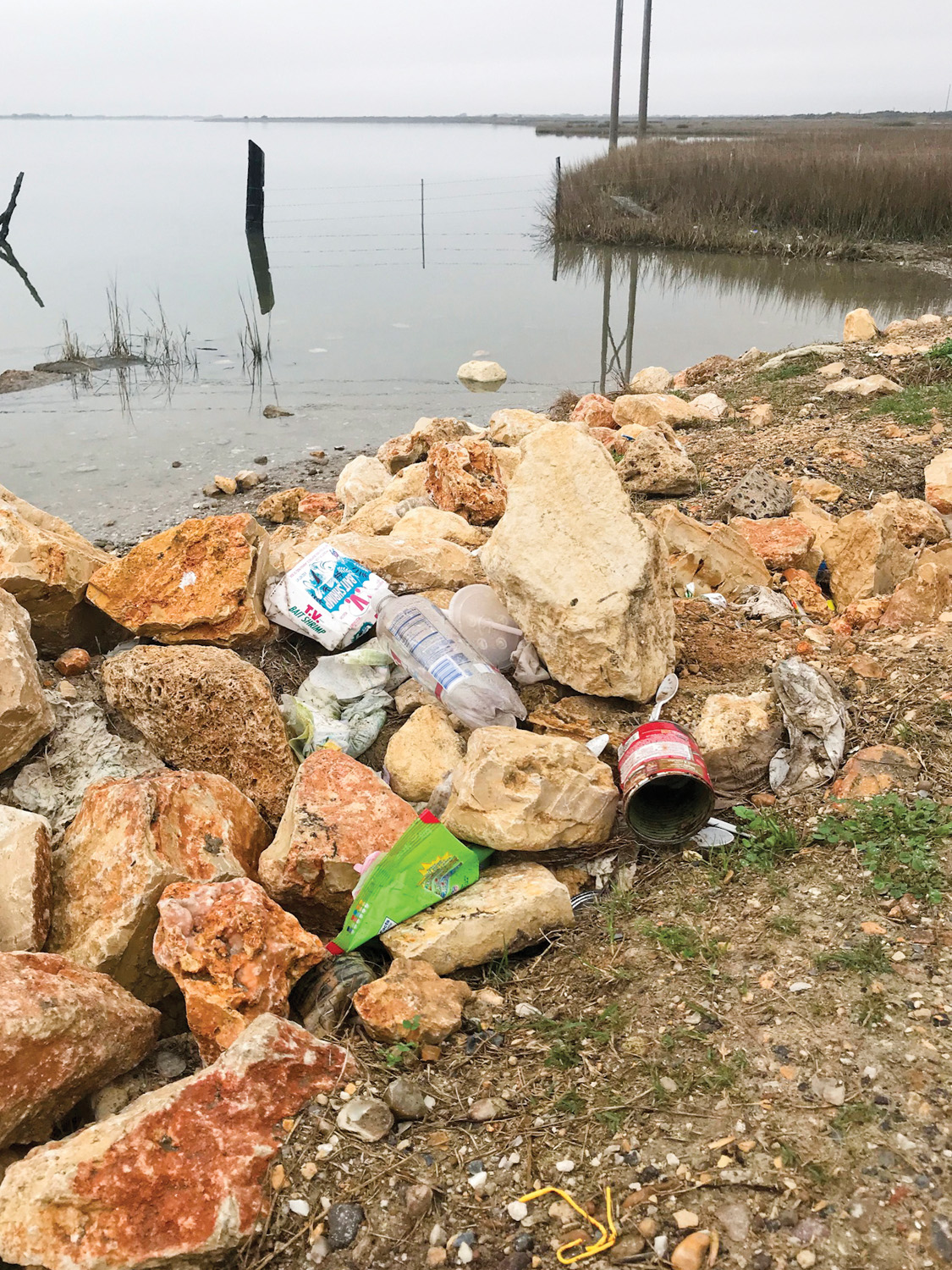 Trashy bank fishing spot; we see this way too often.

Since you are reading this, you are obviously a coastal angler and have seen too many examples of disgusting litter along the shorelines of canals, bayous, and bays. Litter reaches these places from a variety of sources and, unfortunately, fishermen sometimes contribute to the problem.

Some of this refuse arrives innocently enough, swept down waterways that drain into the bays during floods, trash cans get overturned during windstorms, and so forth. Well-meaning citizens dispose of trash responsibly but Mother Nature intervenes and the well-intended action ends up being thwarted.

Trash also arrives to Texas shores from faraway places, riding gulf currents until finally washing up in our bays and on our beaches. Again, while we might not be a direct contributor to the problem, we can be part of the solution, and we’ll get to that in just a bit.

In general, litter can be broadly categorized as either biodegradable or non-biodegradable. Biodegradable trash takes care of itself in the fullness of time, even though it remains unsightly during the process. Plastic turns out to be one of the greatest environmental offenders and fits the non-biodegradable classification, given that it takes a very long time to decompose, if ever, and when it does it breaks down into smaller particles (still plastic) that can be even more hazardous and invasive to the marine environment. See Stephanie Boyd’s work that appeared in TSFMag – January and February 2018 – The Plasticene Era – Parts 1 & 2.

TSFMag has been involved in and supported many bay and beach cleanups over the years. The most notable and publicized examples have been hands-on participation at the Friends of Padre – Billy Sandifer Big Shell Beach Cleanup, along with advertising support of that event and also the Port Mansfield East Cut and Beach Cleanup. Both are very worthy efforts that have removed thousands of tons of litter from Texas beaches and shorelines. We applaud all who have participated and supported events like these, wherever they are held in our state, and beyond.

So, in keeping with our tradition of supporting and encouraging fishermen to become part of the trash solution, we are encouraging several actions that can be taken. But, before getting into those, let me tell you how to win some great prizes for your efforts.

•When you come upon a trashed-up shoreline or bank fishing spot – remove as much trash as you can. Bag it up and dispose of it in a proper manner. Shoot some before and after photos, and email to [email protected].

•We will select a winner each month to receive complimentary subscriptions to this magazine, logo caps, t-shirts, and other cool gear contributed by our partnering sponsors. Everybody is welcome – one winner each month – winners will be eligible only once per year.

Plastic and water don’t mix – Become part of the solution!

Reduce! Simply put, reduce the amount of plastic packaging you take on fishing trips. The less you carry the less you are likely to lose track of while fishing. Plastic drink containers are some of the most common offenders. Rather than bottled water or sodas, carry drinking water and pre-mixed drinks such as Kool-Aid and Gatorade in a Yeti Rambler Jug or similar container, and serve drinks in reusable cups and mugs. And please, empty beer cans have no place in the bay or on the beach!

Ice sacks – Another problem on the water. Ever had one foul the cooling water intake on your outboard while idling in a harbor? I have. Ever seen one washed up on a shoreline? We probably all have. Dump your ice in an ice chest and dispose of the sack properly before leaving the dock.

Styrofoam cups – Say no to these, too. They’re too likely to blow out of the boat!

Bag it on the boat! We use a product from ForEverlast Hunting and Fishing Products called The Sack and it’s great for keeping refuse contained on the boat.

Take a few seconds to round up any items that could blow out of the boat before trailering down the road. Check the roadway leading to any popular boat ramp and you will quickly see what I’m talking about.

Pack out more than you bring in! Make a practice of carrying a roll of trash bags in your boat and vehicle. When you happen upon a littered shoreline, bank fishing spot, or even a roadway, jump out and bag it up. It only takes a few minutes. (Don’t forgot to make photos!)

Recycle! Eliminating plastic completely from our lives is impossible – but we can sort and separate our discards and send them on their way to a recycling facility. I am by no means an environmental wacko but I have vowed to become a better steward of the planet. Please join me – especially on the water.

Our coast and other waterways are too precious for the way fishermen, in general, have been treating them. It’s time to change our ways!