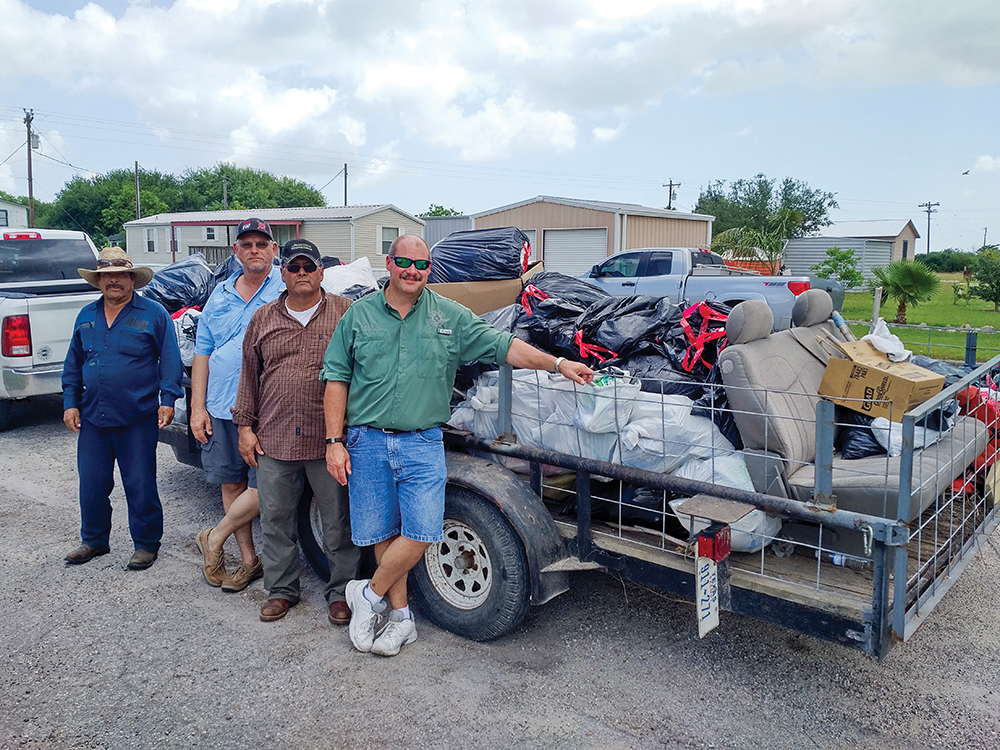 Calhoun County Commissioner David Hall and members of his Precinct 1 crew were instrumental in disposing of the 1,820 pounds gathered by 134 volunteers that participated in the April 2017 cleanup. Photo by by Rhonda Cummins.

For this installment of Plastic and Water Don’t Mix we will be focusing on the Texas General Land Office (GLO) Adopt-A-Beach program. This is a coastwide initiative that does a tremendous work removing debris from gulf and bay beaches from the Louisiana border all the way down to South Padre Island.

GLO launched Adopt-A-Beach in 1986, more than thirty years ago. Since that inaugural event more than 550,000 dedicated and conservation-minded volunteers have donated of their time and resources to remove an incredible 9,600 tons of debris from Texas beaches. I have no means of quantifying and comparing the accomplishments of GLO’s Adopt-A-Beach with similar programs in other coastal states…but we all know everything’s bigger in Texas. So I’ll just leave it at that.

There are myriad sources of beach debris – some of it collects there innocently enough – as in powerful tropical storms wreaking mayhem through coastal communities.

Some of the debris that collects on our beaches comes from way across the oceans. Not all nations and societies are as environmentally aware as we are.

Sadly, some of the clutter we find on beaches here in Texas is left behind by careless beach-goers and fishermen who just don’t give a damn. I remember my initial participation in the Billy Sandifer Big Shell Beach Cleanup. The first couple hundred yards of beach my work group was assigned to clean included no fewer than three campsites that had been disgustingly abandoned.

The size of the campsites suggested more than a few people were living in them and probably for several days. Tents and pop-up shade structures, bottles, cans, food wrappers, dirty diapers, Igloo ice chests, even a porta-potty. Maybe there was a good reason for those campers beating a hasty retreat off the beach. The campsites appeared several weeks old and some might be willing to give them the benefit of doubt. But I cannot think of any reason good enough for not returning and cleaning up the mess. The haul in those first couple hundred yards filled a 12-foot utility trailer with three-foot sideboards.

Adopt-A-Beach is a wonderful opportunity for friends, family, and social groups to spend a day outdoors together, accomplishing a very worthy goal.

Beach debris is not only unsightly, it can be downright dangerous to beach-goers, fishermen, children, and pets – and equally importantly – the many species of birds and wildlife that inhabit our beaches. I watched a video recently on Facebook of two kind fishermen rescuing a brown pelican entangled in abandoned fishing line. I have also heard reports of coyotes on Padre Island National Seashore dying a long and painful death after becoming entangled in fishing line.

Participating in Adopt-A-Beach is as easy as a Google search for Texas GLO Adopt-A-Beach. Several communities along the coast have their own organized events that volunteers can join. The GLO website is loaded with ideas and opportunities for participants.

If you are unable to participate in an organized clean-up event but would still like to be involved, here’s an idea for you:

-Carry a box of heavy-duty trash bags in your car or truck and another in your boat, if you own one. Invite some youngsters or fishing buddies to join you for a day on the beach or a fishing trip. I guarantee that somewhere during a day’s fun and travels you will happen upon some beach debris. Break out the bags and pick it up. And, of course, always put litter in its place.