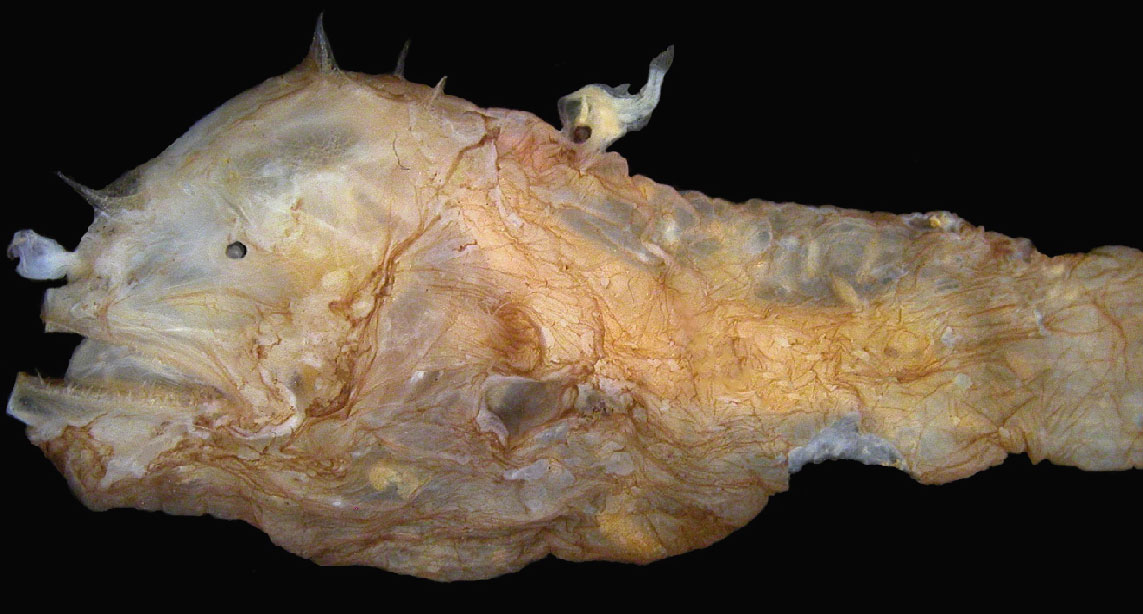 A preserved female anglerfish with a male attached to her back. The female is about 2 inches long while the male is less than 1/4 inch long. Credit: T. W. Pietsch, University of Washington.
Perhaps it’s not surprising that a creature as fierce looking as the angler fish has pretty extreme mating habits —  starting with a neverending love bite and ending in death. Angler fish have long, sharp, ferocious looking teeth, but only the females use these for eating. The males use theirs on the females.

But first, the males must find the females. Angler fish live in the darkest depths of the ocean. It can be hard to find mates in all that darkness, so males use their exceptional sense of smell to locate females. Males need the females not only for reproduction but also for sustenance. Males are tiny compared to females, and their digestive systems never fully develop.

Once the male finds a female, he bites into her body and never lets go. His digestive enzymes dissolve the tissues between the male and the female so that the two are permanently fused to each other. The male obtains his nutrition entirely from the female. But, the male is not just a parasite that steals food from the female. He has his sperm to offer, which are transferred through his body to hers.

A single female may have multiple males attached at the same time, so she always has a good supply of sperm. And what becomes of the male? His eyes and organs deteriorate so all that’s left are his sperm-filled testes.

Sex for the male angler fish starts with a bite and ends with death.